PAINTING DREAMS at the Denver Art Museum
Art class doesn’t have to end just because school is out. The Denver Art Museum wants to spur mini Monets’ creativities, and from March 21 to April 5, admission for children 18 and under is free. The museum adds to the whimsical figures in Joan Miró’s Instinct and Imagination exhibit with live, art-inspired performances by Buntport Theater, bilingual storytelling sessions, and interactive backpacks filled with activities and crafts. Details: Free. Opens March 22. denverartmuseum.org

HAPPY CAMPERS at the Hotel Boulderado
Parkas or T-shirts? It’s anyone’s guess which spring break weather will make an appearance. Curb the chances of a campout-ruining storm with an overnight “camping” getaway at the Hotel Boulderado. The Happy Camper Kids package includes tents and sleeping bags in a deluxe room (two queen beds or larger) and provides a backpack, water bottles, and a map that highlights the best of kid-friendly Boulder, such as the play structures along the Pearl Street Mall. Don’t worry about missing out on s’mores either. Each reservation includes a $25 dining voucher for the hotel’s Spruce Farm & Fish Restaurant or in-room dining; we suggest you put it to use on the decadent flourless chocolate cake in either spot. Details: From $249 per night. boulderado.com

FLIGHT PLAN at Wings Over the Rockies Air & Space Museum
Kids take jumping on the bed to a new level when they test the science behind g-forces at Wings Over the Rockies’ Kids Day (March 29). In the company of a B-57 bomber and a fighter jet, children explore gravity as they spring from a bungee trampoline and flip on a gyroscope. If your future Charles Lindbergh wants to someday sit in the cockpit, visit activity booths for a lesson in the aerodynamics of paper airplanes or a session of flying remote-controlled aircrafts with the help of an instructor. Amelia Rose Earhart—the local pilot who became the youngest female to fly a single-engine plane around the world in 2014—will be on-site to inspire the next generation of women looking to cruise the skies. Details: $11 for adults; $6 for children four to 12 years old; free for museum members and children younger than four years old. wingsmuseum.org 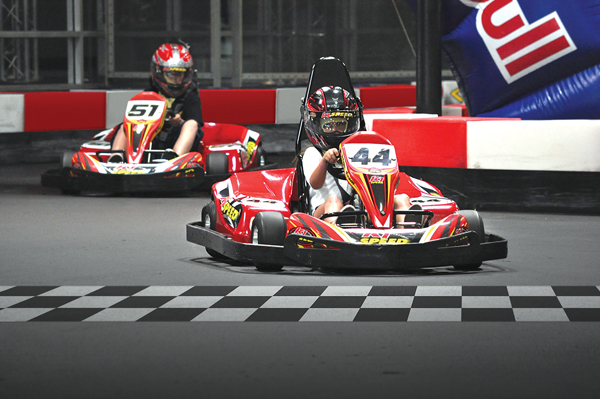 KART ACADEMY at K1 Speed
Speedsters, start your engines. Racers who have graduated from standard mini-golf go-karts can get a crash course (figurative, not literal—we promise) from professional racer Patricio Jourdain and race junior electric cars that reach speeds of 25 miles per hour. The three-hour session starts in the classroom before tiny Mario Andrettis put their lessons about throttling, braking, drafting, and etiquette to the test out on the track. To ensure fair matchups, the juniors—ages six to 11—are separated from the big kids (12 and older). Overachievers can stick around to try their new techniques against unsuspecting competition in the Arrive and Drive races that run seven days a week. Details: March 28 and March 29. $99. k1speed.com

Visit 5280.com/kidsandfamily for more ideas on entertaining the little ones.