Boulder isn’t short on picturesque panoramas of the foothills, but few spaces showcase the postcard-worthy Flatirons as impressively as this contemporary stucco-and-glass home on the west side of town. With its structural zigzags and multi-tiered layout, the sleek origamilike retreat is both airy and compact. It delivers a nontraditional living space more fit for entertaining and leisure than family practicality, which is exactly what homeowners Chris and Denise Hess—whose children are off to college and beyond—were looking for. “We really did build it selfishly,” Chris says. “We’re pretty big outdoorsy folks, and we wanted to take advantage of the Boulder lifestyle. It was important to bring the outdoors into the house in a seamless way.”

The house near Chautauqua Park is a testament to the innovative spirit of local design and architecture firm Arch11, which conceived and executed the home (with contractor Hammerwell Incorporated) within the constraints of the city’s notoriously stringent building codes and restrictions. “Boulder has very strict bulk, height, setback, and solar-shadow rules,” says Arch11 principal E.J. Meade. “For example, you can’t shade your neighbor’s property any higher than a 12-foot fence would.” The house, which took one-and-a-half years to build, required about nine months to design and get approved by the city. 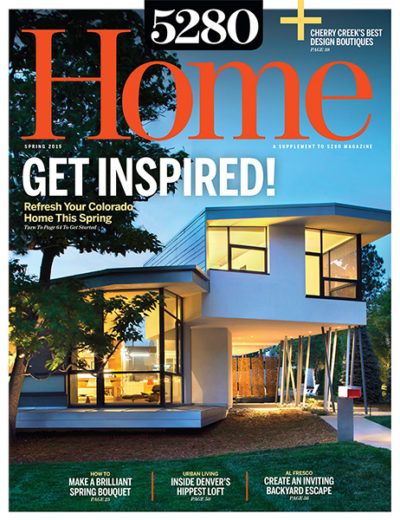 For the Hesses, who decided to relocate from Louisville to Boulder when their kids were almost out of the house, it was love at first sight when they happened upon the empty lot in the summer of 2010. It was a blank canvas, for sale by a builder whose plans to erect a home were thwarted by the economic downturn of 2008. The problem, however, was that they’d already purchased a bungalow just blocks away and tapped Arch11 to remodel it. But the more they tried to reshape the house to their liking, the more the costs piled up. “They were constrained by the bones of the old house,” Meade says. “It could never be 100 percent what they wanted.”

So the Hesses abandoned the renovation plans, put the bungalow on the market, and purchased the lot with the million-dollar view. “We wanted to utilize the space in the most awesome of ways,” Chris says. “We wanted it to be open, with more shared space. We wanted to entertain but didn’t want to build a giant house. We didn’t want the square footage.”

The homeowners tasked the Arch11 team with designing a 3,300-square-foot modern layout that accounted for these specifications (plus the city’s) as well as the desire to incorporate as much glass as possible on the sides that face the Flatirons—no small feat. But, says Meade, “Good designing is understanding that limits are opportunities.” Chris, who is the founder and creative director of Boulder-based digital design firm Mondo Robot, agrees. “I have a deep background in design, so the language we were speaking was very familiar,” Chris says. “Plus, I have a strong trust in [Meade’s] aesthetics.”

The result is a series of angles that blur the lines between inside and out—with design elements that create the illusion of more space. For instance, the cantilevered top floor, where the master bedroom is located, is supported by what Meade calls a “forest of columns”: slender steel poles installed at a slant, rather than perpendicular to the ground, to create a ground-level space almost like an outdoor room. Inside, the designer found more ways to “fold” rooms into one another with a lengthy panel of rhomboid–shaped skylights that filter sunshine all the way down to the basement, which houses two bedrooms and a
home theater.

Meade, who managed the interior design as well, kept the decor minimalist. “Because so much is going on with the geometry of the house, we tried to quiet down the palette so the outdoor views would have more presence,” he says. Almost everything indoors is white oak (cabinetry, stairwell, shelving), polished concrete (floors), and stainless steel (counters, appliances). The white walls and neutral furniture preserve the wide-open feel and allow artwork and accents, such as the bright kitchen-counter stools, to pop. “The goal was for it to feel as bright inside as it is outside during the day,” he says. Because—as this house effortlessly illustrates—sometimes in Colorado, it’s best not to compete with the view.