The Draw: An endearing and romantic bistro with neighborhood charm and global soul.

The Drawback: Service seems to give preference to regulars; this stretch of East 28th Avenue can feel a bit dicey after dark.

“I feel like I’m in Eastern Europe or Greece or even Africa,” I said to my companion within moments of our arrival. Fluorescent lights beat down on an open kitchen framed by dangling speaker cords held together with blue painter’s tape. Fresh flowers and white tablecloths, accessories that restaurant design firms have recently decided we should ditch, adorned tightly packed tables. The floors were made of large terra-cotta tiles, the kind that look like they came off the boat from the motherland. Global landscapes and portraits hung on the walls, such as an Andy Katz print of a grinning black woman smoking a cigar. My dining companion, a suds lover who could pass as an unofficial cicerone, discovered there was only one beer on offer that evening—Kronenbourg 1664. The humble French lager, which is served in Paris as often as Bud Light is served in St. Louis, was poured from a Budweiser tap handle.

I was not, of course, in a French colony on the coast of Africa, but in Park Hill at Bistro Barbès, a 32-seat gem where the transporting aesthetic is entirely by design. I go into every first meal blind, reading a folder of opening press only after my initial visit, but my friend came back to our table midway through that first dinner with some insight: He told me about a photo of Paris’ Boulevard Barbès, a thoroughfare in the 18th arrondissement, that hangs in the restroom. We realized that chef-owner Jon Robbins—who grew up in Park Hill but spent a handful of years cooking abroad before landing in Denver at Mizuna—had named the spot for the multicultural Parisian neighborhood where transplants from the Maghreb, Sub-Saharan Africa, and the Mediterranean bump (or, in the case of the notoriously crowded farmers’ market there, shove) elbows. This tie to Barbès is “appropriate for the food that I like to cook,” Robbins told me in a phone call. 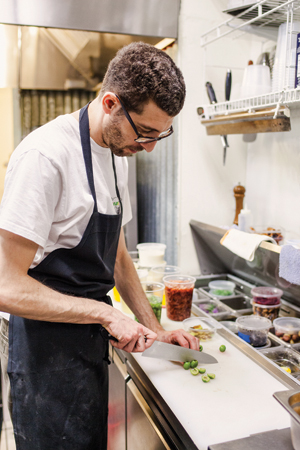 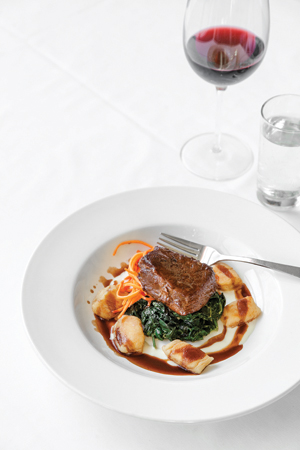 The vibe of the 10-month-old restaurant carries over to the food. Menus, which are different each visit since they change as often as twice a week, were littered with French and North African terms such as “berbere,” “daube,” “toum,” “vierge,” and “p’stilla” (a Moroccan meat pie that is more commonly spelled “b’steeya”). Like chefs in many Old World kitchens, Robbins—an alum of Ledoyen, a historic three-Michelin-starred restaurant in France—is producing most of his pastry in-house. He created the feuilletage that cradled a quince tarte Tatin and the toasted pita that accompanied a fattoush of skin-on winter squashes and root veggies.

One night, Robbins emerged from the basement with flour all over his apron from rolling, likely, another batch of the linguine I was twirling around a tender clam. This is a kitchen that in the summer grows its herbs in pots out front, sources cherry tomatoes from the home gardens of each of its cooks, and benefits from a few neighborhood regulars who show up with vegetables from their backyards. The Barbès team uses chicken feet to make broth, builds an aïoli around leftover duck gelée, and roasts and grinds its own spices for complicated African seasonings.

Across several months of dining at Bistro Barbès, my favorite dishes included a phyllo-wrapped Burgundian wild escargot b’steeya. The pastry crackled as I pressed the side of my fork into it. Inside, whole snails were surrounded by cremini and maitake mushroom duxelles and a complex mélange of cardamom, cloves, cinnamon, coriander, cumin, fenugreek, and turmeric. During a visit to the four-seat bar, another starter impressed me: An artichoke heart, stuffed with diced mushrooms, zucchini, and artichoke flesh pulled from the leaves, sat atop a brilliant red pepper coulis that tasted like the puréed peppers had first been charred over a backyard spit. During a third meal, my companion and I locked forks over the pickled green tomatoes that brightened an impeccable beef tartare. I loved a trout entrée—tender, crisped filets sat on salty, cold-smoked pieces of the fish and were served alongside a sorrel and redskin potato salad. On one visit, the quince tarte Tatin was one of the best uses of the ancient Iranian fruit I can remember. Thick wedges of fresh quince were enveloped in an elegant house-rolled puff pastry and came with foie gras ice cream that was so unforgettable a friend subsequently purchased a pint to take home. 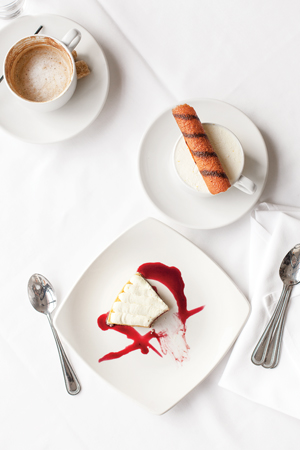 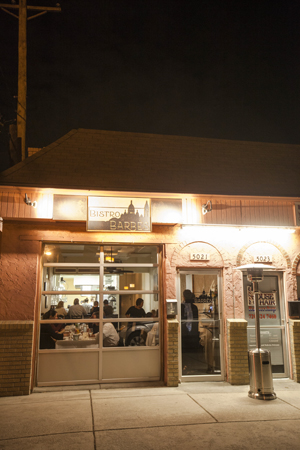 Throughout my visits, however, several dishes came out only moderately warm, cooling completely after the first bite. A monkfish entrée was a bit stringy, a sweetbread was rubbery, and the skin on a duck leg confit entrée was so thick and floppy that I pushed it to the side of my plate.

Over the course of several meals, service, managed by Robbins’ girlfriend, Megan Silvertooth, was also mixed. Sometimes it befit the restaurant’s white tablecloths: During my first visit, our waitress carried that Kronenbourg from the bar to our table upon seating us. She came to take our order just seconds after we closed our menus and moved them to the side of the table. Fresh flatware was delivered promptly, napkins were folded when we left our seats, and menu details were delivered with an infectious enthusiasm for the food.

But too often, Bistro Barbès was so much the quintessential neighborhood spot that my dining guests and I felt penalized for having driven across town. On numerous occasions the lead server was too wrapped up in tête-à-têtes with friends or regulars to notice that we needed wine poured, plates cleared, dessert choices, or the bill. On two different visits, a supporting staffer—who’d been cut for the night prematurely—was clocked out and sitting at the bar eating dinner and sipping wine when such service lapses occurred.

On one evening I had a lengthy conversation with our server about a 2008 Rhône blend and the character it would offer precisely because of the wine’s age. When she presented the bottle to our table a few moments later, I noticed it wasn’t an older vintage at all, but a young 2012. Embarrassed, she explained that she’d just run out of the 2008 earlier that day. I understand such turnover in a tiny restaurant, but it was odd that the four-year edit to a list she oversees hadn’t dawned on her during our discussion (not to mention before presenting the bottle). The most frustrating service moment, however, happened during a visit that didn’t even take place. My neighbor and I drove several miles on a Wednesday night only to find Bistro Barbès randomly closed. I respect the entrepreneurial prerogative to shut the doors on a night that was so record-breakingly frigid that, I later learned, customers were cancelling reservations and a cooler broke. What was disappointing, however, is that there was no mention of the closure on the restaurant’s website or its voice mail message—both of which we checked. The oversight wouldn’t have been a big deal if we were some of those Park Hill regulars who’d just wandered over, but the unannounced closure again left us feeling shortchanged for being across-town visitors.

I’m certain that if, on any number of meals that did take place, my companions and I had been the table in a heated conversation about its latest book-club read, or the one talking about a trip to Somalia, we might not have cared that $24 entrées were a little rubbery or under-rendered. If we were one of the handful of tables who were friends with Robbins and Silvertooth, or if we were produce-growing neighbors, I know there wouldn’t have been any delays or unanswered questions. And if Robbins was truly after “just” a good neighborhood eatery when he opened Bistro Barbès, then he’s already succeeded. There is no doubt Bistro Barbès is a great addition to Park Hill. But he quietly wants more than that.

“We want to be the best restaurant in town,” Robbins told me. “I know that’s a lot of goal in a little restaurant.” It is a lot to shoot for, but given the chef’s background and spirit, he’s certainly qualified to give it a shot. However, Robbins will need to be honest with himself about Barbès’ shortcomings, only some of which are fixable. The Park Hill native cannot, for example, change the fact that this stretch of Fairfax is, in his words, “depressed” and doesn’t inherently draw destination diners the way, say, Union Station or the Source do. As “the only business open at night,” he cannot alter the lack of evening foot traffic that engenders more spontaneous dinner customers. If Robbins wants his Park Hill asset to mature from world-inspired to world-class, he’ll need to address the food and service shortcomings that are within his reach.