Large-scale development opportunities are scarce in the zealously zoned People’s Republic. So when the Daily Camera’s exodus left a rare opening on Pearl Street, it was snapped up to make way for an exciting (and huge) newcomer: PearlWest, a modern retail and office space. The project, developed by the Nichols Partnership, will offer 130,000 square feet of flexible-design office space, as well as three restaurants and an open-to-the-public rooftop deck with views of the Flatirons, when it opens at the corner of Pearl and 11th streets in autumn of 2016. But designing a building to complement historic Pearl Street’s classic look—and pacify Boulder’s unique populace—is no small task. Here’s how the architects behind the project, Chris Shears and Andy Rockmore of Denver-based firm Shears Adkins Rockmore, did it.

5280 Home: How did you begin the design process?
Shears: From the start, one of the things we heard from the community was, This building should reflect what Boulder is. So we asked, What is Boulder? Fundamentally, Boulder is a tight, well-planned community surrounded by open space. So we characterized it as a “wilderness city.” The building should reflect that, which is why we have a rooftop deck and lots of glass windows.

What will the relationship be between passersby and the building?
Shears: We felt it was important to be able to see into the building; that benefits the street. We think a lot of young people will be working there, software engineers and techies. At night, we wanted the building to glow. But we also felt the views were just as important from inside out—the views are spectacular to the west, and on the rooftop, there are views to the north and east and south.

Rockmore: The amount of glass on the building allows the space to breathe and people to enjoy the incredible views, both of the street and of the mountains. You’ll know where you are in the city when you work in this building, and I think that’s a fairly evolved approach to a downtown historic district. 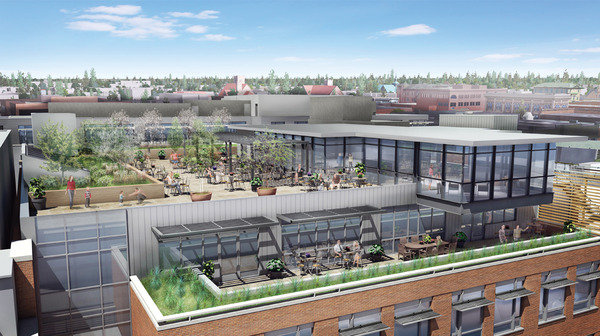 Tell us more about the roof deck.
Shears: You know that in Boulder it’s not acceptable to use an elevator, of course, so we designed an exterior staircase that accesses the rooftop and restaurant. That roof will be open during certain hours, likely 8 a.m. to sometime in the evening. Anyone can walk up those stairs and enjoy the rooftop deck with views of the Flatirons and the Front Range—and the mountains beyond.