“The first time we entered the band competition at Telluride [Bluegrass], we didn’t even advance to the second round,” laughs Travis McNamara, the banjo player for Denver-based string quintet Trout Steak Revival. McNamara can laugh about it now, because the band entered the prestigious competition again last year, this time taking home first place. In the world of Rocky Mountain folk, that’s a big deal. The 10,000 tickets to the Telluride Bluegrass Festival typically sell out in a couple of days every December, and for bluegrass lovers it’s a preeminent showcase of new talent and musical legends.

Though Trout Steak Revival admits the win didn’t hurt, the band was on an upward trajectory before the festival. If anything, the win solidified what they were already doing (and ensures that they return to Telluride again this summer, as a main stage act). That’s good news for a young ensemble about to release its first professionally recorded full-length album, Brighter Every Day (out March 26), and embark on a national tour.

Though the majority of the band originally hails from the Midwest, all five members of Trout Steak now call Colorado home, a fact that’s integral to the group’s sound. “I think we’re really lucky to be in a community of acoustic and bluegrass musicians here in the Front Range,” says McNamara, “We learned to play [our style of] music in picks around campfires and at the Telluride Bluegrass Festival in Town Park. It’s such a community-based thing—that’s how it started, and that’s still so important to us.”

Trout Steak’s experiences at Telluride helped them transition from a djembe and guitar-based sound to its current bluegrass instrumentation. Because the band plays primarily in Colorado—and not in, say, Kentucky—the band is rooted in folk and bluegrass traditions without feeling pressured to be a classic bluegrass band. In fact, there’s a duality to Trout Steak’s music that parallels a lot of other Centennial State musicians and proponents of newgrass in general. At once bluegrass and rock ‘n’ roll, lyric-driven and interested in improvisation, the band has developed its style largely through keeping an open mind and collaborating. “I think that’s why so many musicians have moved to this part of the country,” says Casey Houlihan, the band’s standup bassist. “The communities of musicians in Colorado are just amazing.”

When it came time to create to Brighter Every Day, the group turned to another Denver-based musician to produce the record, the Infamous Stringdusters’ banjo player, Chris Pandolfi. The 11-track album, funded entirely through Kickstarter, is the band’s best to date (at least in this writer’s opinion). “We all write and sing, so we took all the songs we had on the table—we might have had 15 we put in a pool—and just whittled it down,” explains Will Koster, who plays dobro and guitar. Mandolin and guitar player Steve Foltz and fiddler Bevin Foley round out the band, which eschews the notion of a traditional frontman: every member has at least one song on the new album.

“We ended up raising double the money that we expected to raise,” says McNamara, referring to the Kickstarter, “It was this big outpouring from our fans, which we didn’t see coming and which we’re super thankful for.” The money ($36,587 to be exact) enabled the band to go the extra mile with Brighter Every Day, pressing vinyl, documenting studio-recording sessions, and throwing an album release party at the Bluebird Theater. Getting Pandolfi on board—with his talent and years of experience as a career musician—was also significant.

“He highlighted things in a way, and talked to us in a way that lifted us up,” says Houlihan, “It was never ‘I don’t like that,’ but rather ‘I’d like more of this.’” 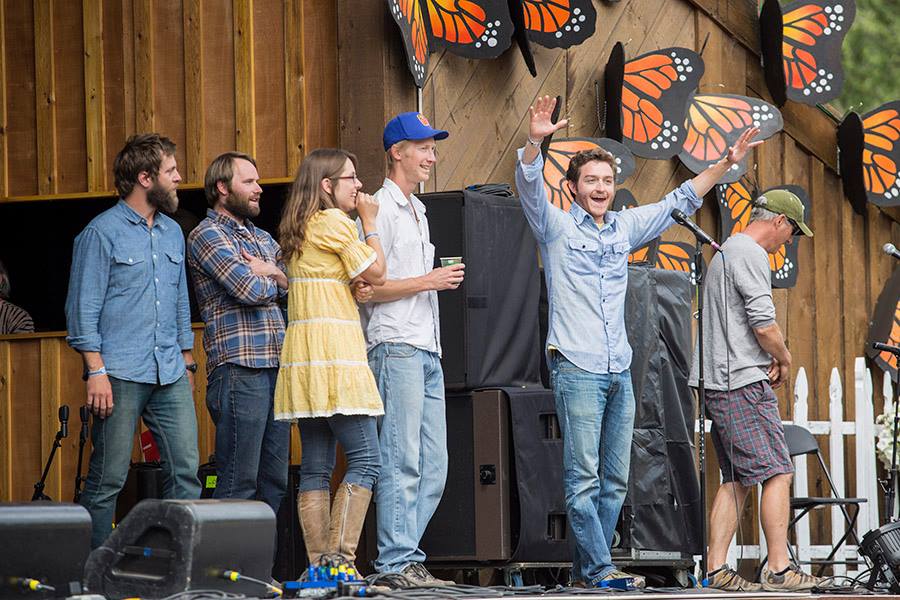 Trout Steak Revival, on stage at Telluride Bluegrass after winning the band competition.

Pandolfi met McNamara while teaching a banjo class at Lyon’s Rocky Grass Academy. The two became friends, and eventually McNamara asked him if he’d consider producing Trout Steak’s upcoming album. After being introduced to the rest of the band and listening to demos, Pandolfi was struck by the quality of the original material, as well as the group’s synergy. “I always appreciate a dedicated band, committed to learning and creating music together that’s more than the sum of the parts,” explains Pandolfi. “That’s how I would describe Trout Steak and that’s why I agreed to produce Brighter Every Day.”

The writing on Brighter Every Day brings originality to a heavily saturated scene, exuding positivity and warmth. Two of Pandolfi’s favorite things about Trout Steak—its harmonies, as well as its constant sense of ensemble playing—come through on the album, which is true to the band’s natural sound. “With five really talented people devoting so much time, energy, and care over the years, the result is something very unique and special,” he says.

So what’s next for the band? “We’re going to get a safe van and ride all over the country,” says Houlihan. “We just want to get out there and meet the people.”

See Them Live: The band is hosting an album release party on Thursday, March 26 at 8 p.m. at the Bluebird Theater, 3317 E. Colfax Ave. Tickets are $10–$14 online and $18 at the door. The group will also open for the Infamous Stringdusters on April 18 at the Boulder Theater (Buy tickets here).