The sandstone gully looked like so many other canyons across the Southwest—sagebrush and willows were scattered indiscriminately below the bulbous 30-foot cliffs. We were hoping this particular chasm was different, though. “This has to be right,” I said, sounding more confident about our bearings than I felt. If we’d followed the driving directions correctly, my husband, Ben, and I had just parked at Mule Canyon, home of the famous House On Fire ruin and a smattering of other Ancestral Puebloan archaeological sites. But no parking lot or trailhead sign reassured us we’d come to the right place.

Spanning the sandy wash bottom just ahead of us was a short wood-planked bridge that was supposed to mark the start of our hike. So we parked alongside County Road 263, a graded dirt byway, and scrambled down the embankment into the canyon. Whether we’d found Mule Canyon or a look-alike, we knew we’d probably stumble across some fascinating remnants of the Native Americans who likely inhabited this pocket of southern Utah sometime between the years of 550 and 1200. Located some 30 miles west of Blanding, Utah, the Cedar Mesa region is chockablock with archaeological sites abandoned by the Ancestral Puebloans. Nearly every fingerlike canyon that bores into Cedar Mesa holds ruins of that former civilization. One such channel, the 52-mile-long Grand Gulch, was, according to some archaeologists, probably one of the most densely populated parts of what is now the United States. It may have been the Manhattan of its day, with Mule Canyon and the region’s less glamorous crevices forming the outer boroughs.

Like Mesa Verde, Chaco Canyon, Hovenweep, and other conservatories under the national park umbrella that preserve Ancestral Puebloan archaeology, Cedar Mesa contains petroglyphs, granaries, brick-walled houses built high above canyon floors, and the remnants of circular kivas where people once gathered for sacred rituals and fellowship. But unlike those better-known parks, where established trails and guided tours lead to major attractions, Cedar Mesa’s sites are largely unsigned and unmarked. Most are located within Wilderness Study Areas managed by the Bureau of Land Management. Official trails are scarce, and although footpaths lead to some of the region’s ruins, they rarely start from recognizable trailheads. All of which make visits to Cedar Mesa feel less scripted than those to other archaeology-rich regions—a quality that renders it completely irresistible to any adventurer.

Although I’m not an archaeology fanatic—there are those who obsess over probing every canyon in the Southwest—I do like nosing around the region’s ruins and pondering the paintings the ancients left behind. I’d longed to do the life-list trip through Grand Gulch, but lacking a week or more for that backpacking epic, Ben and I set out to do the weekender’s version of Cedar Mesa.
Armed with a few online trip reports and our DeLorme Utah atlas, we made Mule Canyon our first stop. I was eager to see the House On Fire (actually a granary), which is tucked beneath a sandstone alcove so streaked with desert varnish that it looks like flames. And because Mule Canyon is one of Cedar Mesa’s best-marked destinations, it seemed like a good place to start.
As we entered the canyon, we spotted a path heading west through the sand and sage. Following it soon led us to an interpretive panel that confirmed we were on the right track. We continued on the smooth, level path, alert for any signs of prehistoric life, and after about a mile, we noticed a parting in the thick willows to the right of the trail. A little cairn marked the route through the brush, and after picking our way through, we emerged at a slickrock slope. Above us was the House On Fire.

Finding it felt transcendent, as if we’d journeyed to some ancient fortune-teller’s outpost. But no oracles awaited us at the three stacked-stone granaries—only that strange stillness that radiates from a ghost town. And yes, the weather-varnished stone did look fiery, even without an Instagram filter to enhance the effect.
After posing for photos and craning our necks to look through the granary windows (rappelling into or entering stanchioned structures is a no-no, even in these relatively unpoliced BLM areas), we moved upcanyon to check out Mule’s other, less-famous sites. Catching a glimpse of stacked bricks farther up the trail, we hurried over to an extensive ruin composed of adjoining rooms. After hiking another half-mile, we spotted a townhome of sorts in a higher alcove. Can we even get to it? we wondered. With a little help from our sticky-soled trail shoes (and the trunk of a conveniently placed juniper, which offered a critical handhold for the final scramble up the slickrock ledge), we finally emerged at a sunken kiva. The timbers that once formed its roof remained, though they now lay in a tangle on the floor. We pondered them from the shady comfort of the alcove, listening to the silence, broken only by the occasional wren. Though more discoveries likely awaited upcanyon (we’d heard about multiroom dwellings with intact roofs and passageways), we were brimming with satisfaction at what we’d already found and headed back to the car. 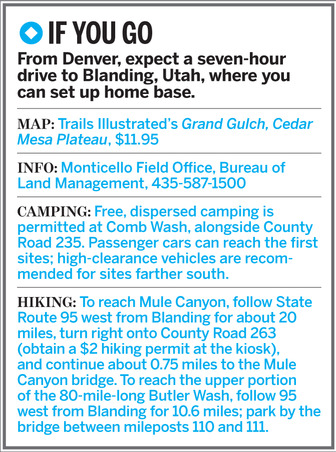 The sleepy settlement of Blanding, Utah, has a handful of motels, making it a good home base for exploring Cedar Mesa. But we opted to camp on BLM land along Comb Wash, a dispersed camping area at the base of Comb Ridge, a long, snaking, steplike fold in the land that serves as the region’s eastern boundary. Turning off paved State Route 95, we drove south onto County Road 235 and assembled our tent beneath the shady cottonwoods. The setting sun lit up the steep face of Comb Ridge to the east. To the west, we watched a small posse of hikers head into the trailless sandstone folds. I didn’t know what they were looking for. Perhaps neither did they. But Cedar Mesa has a way of rewarding prospectors.
The next morning, we followed State Route 95 across Comb Ridge to Butler Wash, which runs along the monocline’s eastern edge. This is the ridge’s more verdant side, where rainwater and springs have created countless gullies that Ancestral Puebloans apparently found quite inviting: Ruined dwellings and rock-art sites are particularly thick along this 80-mile-long drainage. We located Butler Wash on our topo map, parked alongside State Route 95 where it crossed Butler’s broken blue line, and began hiking north.
As at Mule Canyon, we soon noticed a footpath worn into the dirt. But this time no signage announced the area as Butler Wash, and we carried no map that could lead us to its treasures. So we remained vigilant, our eyes scanning every nook and fissure for evidence of the area’s former residents.

Usually I zone out while hiking, letting the trail become a walking meditation or an opportunity for soul-searching conversation with my hiking partner. Buried in thought, I often don’t key in to my surroundings until I reach the hike’s goal—a summit, a lake, an obvious turnaround point. Here, though, I couldn’t expect to blindly end up at my target. Sites could be anywhere, so I sought them everywhere, crackling with attention like a kid on a scavenger hunt. In the process, I admired clandestine alcoves and interesting rock features I never would’ve noticed had I just plodded along. We picked our way into every side canyon that looked inviting, not caring whether the foray turned up riches or a dead end. Once we spotted a ruin, we’d scrutinize the terrain and design our own route to it through the ledges and hills. Exploration became the reward. The remnants were just a bonus.

Some sites in Butler Wash were elaborate, with tall, multistoried mortared walls. Others had crumbled to little more than a few stacked bricks. None were marked with signposts, so when we noticed a particularly faint track heading up a soft clay hill to the east, we exchanged glances. “Think it’s just a game trail?” Ben asked. Probably, I thought. But why not check it out?

The track faded as the dirt gave way to slickrock, but we continued on, snaking our way between the junipers and scrambling up cliffs made of soft rock and clay. Soon we found ourselves in a cirque, surrounded by walls too steep to climb without ropes. “There it is!” Ben said, pointing. Bricks—some still covered with the mud plaster that once gave these walls a smooth veneer—filled the alcove from top to bottom, creating what looked like a fortress. I wasn’t surprised it was there. The surprise—and ultimate pleasure—was that we had found it on our own.