January 16 ­— Things tend to happen really fast in my life, and sometimes it can be overwhelming. I have a busy schedule and maintain a heavy caseload at work. But there are also moments that make you pause. During a doctor’s visit, Megan and I found out the gender of our baby; the room seemed to be moving in slow motion as the doctor said, “It’s a girl.” In that moment, my world changed. Our blended family (Megan’s child and mine from previous relationships) consists only of boys. Now we have a little princess (ultrasound pictured at right) on the way. 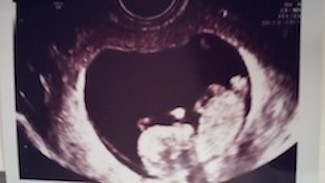 Around that same time, something else made me pause: My subpoena arrived for the theater trial. I pulled it out of the mailbox and was immediately overcome with grief and anxiety. For two-and-a-half years, I’ve been playing out the trial scenario in my head in the early morning hours while everyone else is asleep. I’d spent months working with my therapists, doctors, support group, victim’s assistants, and other survivors to be ready—but none of the coping skills I learned helped as I opened the letter from the Arapahoe County District Attorney’s office. Things felt fuzzy again. I couldn’t process what I was reading. Then the phone calls and media requests started to pour in. I spoke about gun violence on the Capitol steps and did interview after interview. I have no publicist—just a lawyer, my wife, and my family to help me decide what is important and beneficial as far as interviews/speaking engagements go. I have never been media-trained or taken a public-speaking class. It’s just me, speaking from the heart.

During these media-saturated times, I often feel nervous about the intentions of the people who call me. This trial has brought up many issues: gun control versus gun rights; death penalty versus anti-death penalty; public safety concerns; mental health issues; and our (possibly) flawed justice system. I don’t want to be used as a pawn.

I used to be anti-death penalty; I looked to the past, pre-DNA testing, when people were being executed and then found not guilty. Then Aurora happened. What do you do as a society when an armed gunman opens fire on an unarmed theater? What is the penalty for a heinous crime other than death? Maybe the NRA can explain why there is a need for civilians to have semi-automatic military grade weapons?

Soon after receiving the subpoena, I decided to take a week off to sort through things. I was overly focused on the theater again and depressed. When those feelings overwhelmed me in the past, I’d do nothing. This time, I went to see American Sniper to relax. Movies have always been a place I could use as an escape. I checked my surroundings and then settled in. The movie was a glimpse of myself. The main character had PTSD and depression just like me. I cried during much of the film. And I suddenly thought, I wonder how my wife feels when I am in one of my moments? It was a question I had never asked her before.

I went home, and I sat down with Megan. I asked her to tell me how I act and how she sees me. She laid it all out to me: “Sometimes you’re distant. Sometimes you’re just on the couch, and you don’t want to do anything. Sometimes you just drift, and you’re not present. Sometimes I want to help, but I don’t know how.” As she spoke, I realized that I needed to start telling her more about how I feel. We talked about a lot of things that we probably should have discussed a long time ago, things I never realized I should ask her about. PTSD affects everyone around you—the mood swings, the anxiety, not being present. It takes a toll on everyone. At times, thoughts of the theater would creep in, and I’d start talking about it, not realizing how that would impact those around me. I never wanted to involve her in all of it, to burden her. I didn’t want her to think of me as less of a person.

The week off—more than two years after the shooting—was pivotal. I had been doing all these projects, immersed in my career, agreeing to speeches, and participating in community work, but I had failed to take care of the one person I love the most in the world, Megan. This was a turning point for me. My priorities needed to change. I had it all upside-down and was afraid to hear the truth. My wife and family needed me; it was time to slow down. I stopped doing German, Chinese, and local TV interviews. I started eating better, exercising again, doing therapy for my arm, and spending more time with Megan and my family. Now we talk all the time.

I had worked myself into a frenzy over that subpoena. When I returned to work a week later, I still felt ugly on the inside; I kept a smile on my face as I stared at the clock. I just wanted to be home. The monkey on my back—PTSD—was having a field day in my head. Will I ever get better, I wondered. PTSD causes me to think often of the past and brings up memories that cause fear, anxiety, and restlessness. It makes it difficult to focus.

I spent a lot of time on my knees praying. Then I hit the restart button. My new focuses, in order: taking better care of myself, faith, my wife, my family, friends, work, speaking. I needed to prepare for the inevitable—the trial—but I can’t let it take all of my attention. I put on my proverbial seat belt and strapped in for the ride that was finally here.

January 23 — I spoke all day at a middle school in Highlands Ranch—six periods and a lunchroom visit. Well before the shooting, I used to speak to kids on behalf of Friends First, an organization that empowers teens to make positive life choices and develop healthy relationships through education and mentoring. I talk very frankly about overcoming obstacles, how I changed my life, my experiences, and, most important, forgiveness. This is my fifth year with the group, and I love it. The climax of my talk used to be a high-speed car chase through a subdivision with Erie police (I wasn’t always the best behaved kid), but now it’s the theater. Whenever I tell the story, the kids go silent. It seems as if they are there with me. After I talk, the kids always have a bunch of questions. I answer every one. Can I see your arm? How can you forgive the shooter? Were you religious before the shooting? What motivates you? My dad needs a job, can you help him? Or they talk to me about what they are going through. I was an at-risk kid. I hated my stepfather and ran away to escape the abuse. Every time I talk at schools, I always remind kids not to make a temporary solution permanent. Life is what you make it—it doesn’t matter where you start but how you finish. I get tired just speaking once a day; today I was absolutely exhausted. But if I can reach just one of the kids at that critical middle school age through my ups and downs, then it’s all worth it. This is how I have found light out of darkness.

Editor’s Note: Marcus Weaver, 44, is a survivor of the Aurora theater shooting on July 20, 2012. His friend, Rebecca Wingo, was one of the 12 people killed. As the trial for the alleged killer nears, Weaver—who is now the director of client services/programs at New Genesis—will be writing a series of “journals” on 5280.com. Weaver will also be journaling periodically throughout the trial. The thoughts and opinions expressed here are Weaver’s own and do not necessarily reflect the thoughts and opinions of 5280.