Fringe populations have long provided material for storytellers, from journalists to artists to filmmakers. A new Colorado documentary combines the narratives of a variety of these often-marginalized subjects—the homeless, injection drug users, and those who scrap metal—into a compassionate and honest film that exposes audiences to a population they likely know nothing about.

The 23-minute Copper: A Story of Life, Scrap, and Drugs is the result of a year of research by a team of local filmmakers. (Watch the trailer.) Director AJ Oscarson first started looking into the premise that would become Copper after he was prescribed six months worth of Oxycontin for a back injury. He wondered why it’s socially acceptable for him to take what he calls “legal heroin,” but there is so much judgment for injection drug users. “We never saw a drug film that didn’t focus on the drug itself,” he says. A friend worked in a syringe exchange and knew about an underground population of metal scrappers—typically homeless, drug-addicted men who illegally took copper from dumpsters and abandoned buildings to make a living. There seemed to be an opportunity to explore drug use without the drugs being the main story, or as Copper describes it: “Work first, addiction second.” 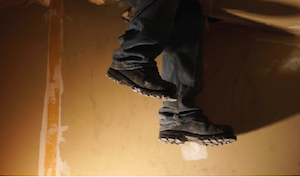 Copper‘s nuanced, present-things-as-they-are approach is an obvious fit for the seven-person crew, a number of whom have anthropology degrees. For eight months, they went out in pairs trying to find scrappers willing to be filmed (which included proving they weren’t cops, handing out cigarettes, and hanging out in some seedy venues). In the end, they found two men—53-year-old Sam, an electrician by trade, and Tao, 30—through which they could explore this population and, ideally, portray the multi-layered stories of injection drug users beyond the illegal substances they used. “No one chooses to do heroin,” Oscarson says. “It’s a matter of circumstance. Everyone I talked to hates it. Tao calls it his medicine.” Addiction, for these men, is simply another part of their day.

Despite their drug addictions, Sam (pictured, right, searching for copper in a ceiling) and Tao both consistently scrapped metal, working six or seven days a week (40 to 60 hours) to find valuable copper to sell to a scrap yard. The biggest haul the Copper team saw Sam bring in $450, and Tao $28. It’s dangerous work for the scrappers—and documentary filmmakers who are technically defying the law. (Thankfully, the Copper crew never encountered the police or any major issues.) Oscarson took combat training first aid in preparation. The three in-the-field filmmakers also carried Naloxone, an injection that can reverse the effects of a heroin overdose—just in case.

We’re not glamorizing it. Copper is a window into how these people live [and an effort] to break away the stigma of heroin users,” Oscarson says. “There’s no call to action.” Though the team does hope to raise awareness about people like Sam and Tao. Or, perhaps, just Tao. Last Oscarson heard, Sam had been clean for more than two months.

Catch the premiere: Copper makes its debut on Thursday, May 7, at 7:30 p.m. at the Oriental Theater. Tickets are $15 and include a post-screening Q&A with the film crew, a community panel on the issues portrayed in the documentary, and live music.