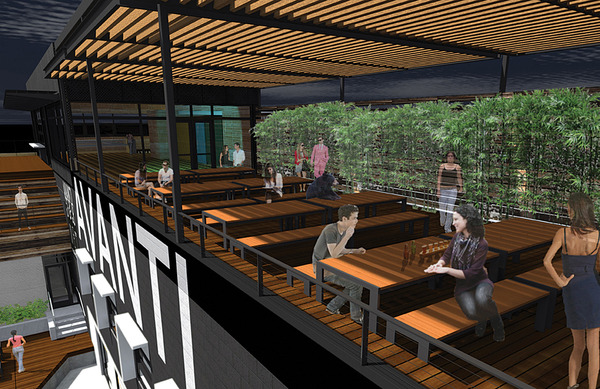 When it opens this summer, Avanti Food & Beverage will redefine the notion of a food court. Partially built out of shipping containers (what else?), the two-story complex’s seven spaces will host a rotating collection of inventive eateries. The first round (leases last anywhere from 12 months to two years) includes Denver startups and staples alike: Poco Torteria from Pinche Taqueria’s Kevin Morrison, Souk Shawarma from Jon Robbins of Bistro Barbès, and a concept from food truck favorite Quiero Arepas.

Avanti partners Brad Arguello, Rob Hahn, and Patrick O’Neill know all these standout eats must be washed down with proper brews. So the Avanti team will dedicate half of the 20 available taps to new, rare, and limited-supply beers from local stars, such as Prost Brewing and Avery Brewing Company. Hahn tapped his old friend—and Dogfish Head Craft Brewery president and founder—Sam Calagione to help fill out the rest with Delaware-based Dogfish’s best sellers and harder-to-find beers. Whether you pair your tacos with an East Coast–born ale or one made just down the street, your best bet is to savor your meal on Avanti’s rooftop deck, where you’ll find killer views of the Denver skyline for dessert. Take that, Panda Express. 3200 Pecos St.