By 1965, five landfills lined the banks of the South Platte River—including the land that would become Johnson Habitat Park, just south of where I-25 crosses Alameda. So while discovering scary materials (asbestos!) in Johnson Habitat’s soil during a 2012 environmental study was disconcerting, it wasn’t that surprising. Either way, the study underscored the importance of the park’s recent $5.5 million renovation. The most expensive piece of the city’s $24.5 million plan to revitalize the South Platte, Johnson Habitat reopens this month after a yearlong overhaul that turned it from a ho-hum open field into eight acres of experiential learning for kids. (The redo also removed contaminated soil and isolated landfill material.) Here’s hoping the new layout teaches tykes how to sidestep the mistakes their forefathers made.

STOP AND STUDY THE FLOWERS. Three plazas, each in the shape of a different native Colorado wildflower—blanket flower, columbine, and blue flax—connect to form an outdoor classroom where the Greenway Foundation’s South Platte River Environmental Education (SPREE) program will host 11 weeklong summer camps. 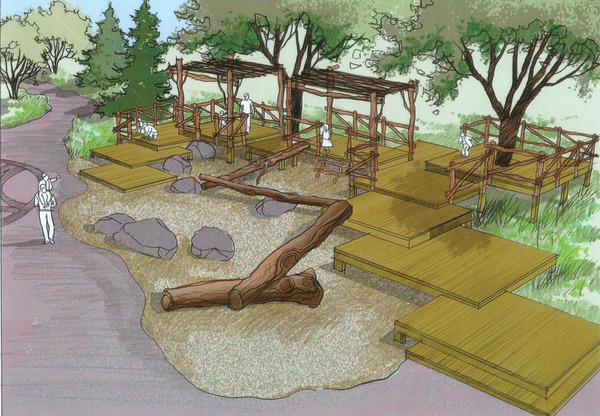 BARK UP THESE TREES. The park’s trees were ripped out during the redo because removal of the contaminated soil caused the trees too much damage. The departed aren’t forgotten; they’ve been chopped and piled up and are waiting to be built into tepees and forts. If your kid is more into climbing structures than making them, lead her up rope nets to elevated metal platforms, which will sit amongst new (healthy) evergreen and deciduous shade trees.

SEE STARS. Don’t let the view from an elevated plaza overlooking the river stop you from admiring your feet—or at least what’s beneath them. Set into the concrete floor is a star pattern that represents a legend from Colorado’s Arapaho and Cheyenne tribes. The legend claims stars were born in the earth but found their ways to the heavens through the roots, trunks, and limbs of cottonwood trees.

LAZE BY THE RIVER. Portions of SPREE’s summer camps take place on a concrete jetty where students learn about the health of the water and the animals that live in it. If you’re just looking to lounge while the little ones learn, set up shop at the nearby amphitheater, which features benches for loafing, boulders for climbing, and a fire pit for—we can only hope—s’mores-ing.

CAMP AT THE CONFLUENCE. Denver passed a camping ban in 2012 but will make a semi-exception for Johnson Habitat. On three nights his summer—including one in June to celebrate the park’s grand reopening—kids and their parents can unfurl their sleeping bags and camping pads on a flat, soft-surfaced plaza (symbolizing Colorado’s plains) in front of eight-by-20-foot boulders (the Rockies).

HIT THE TRAIL. The 17.8-mile paved South Platte River Trail, which runs alongside the river from the Chatfield Reservoir to Adams County, has been expanded within Johnson Habitat to include smaller paths covered with rock particles (called crusher fines) that provide a softer alternative for runners and pedestrians.

TRACK A WILD BEAST. The city sandblasted coyote, fox, and beaver footprints into the park’s concrete walkways. Signs will provide clues to the tracks’ origins, and (if funding comes through) sculptures of each animal will reveal the answers.