Sarah Steiner is a librarian. But instead of cataloging presidential biographies and cheeky children’s books, she curates tools. 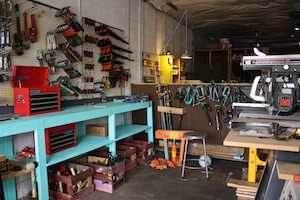 The quirky blonde is the driving force behind Denver Tool Library (DTL), which opened its garage doors at 555 Santa Fe Drive on April 4 after months of putting its own inventory to use in the barn-raising stage of the operation. The volunteer-renovated 1,000-square-foot space is now filled to the brim with 1,409 wrenches, clamps, drills, shovels, handheld and electric saws, and bike tools—a craftsman’s cloud nine. And they’re all available for rent to Denverites.

The establishment is Colorado’s latest in the slew of tool lenders that have emerged across the state (including shops in Boulder and Fremont County) and throughout North America. The premise of a tool library is simple: to make tools accessible to city dwellers with limited revenue and/or space to dedicate to things like table saws and drills. 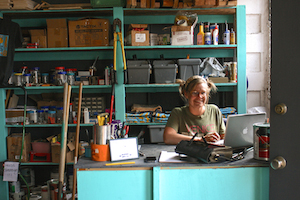 When Steiner heard about the Halifax Tool Library, which opened in Nova Scotia, Canada, in 2014, she thought a maker-happy city like Denver could use a similar organization. She asked the universe for a sign and received exactly that: “Ten minutes later, we’re driving down Kalamath and we see something in the middle of the road. We pull over the car and run out into the middle of the road, and it’s this pair of bolt cutters,” Steiner says, gesturing to a bright yellow pair that hang above DTL’s front desk.

Whether miracle or coincidence, the serendipitous occurrence led to a successful IndieGoGo campaign, through which the organization raised $22,976 this past December. DTL began construction on its space in January, and with the help of a rotating team of faithful volunteers, it announced a soft opening this month. There was no shortage of public support, as evidenced by the 1,271 handheld tools donated by Tactix (a local product designer for the company came up with the idea to arrange a partnership), a bike station courtesy of Velowood Cyclery, and numerous donations by community members.

DTL’s model encourages this kind of public participation by combining the best practices of a multitude of new and old tool libraries, including the Halifax Tool Library and the Toronto Tool Library.

“We’re going to have a nonprofit arm so that people can make tax-deductible donations, and we’re also going to have a co-op arm because we want the members to be involved and have a sense of ownership,” Steiner says. 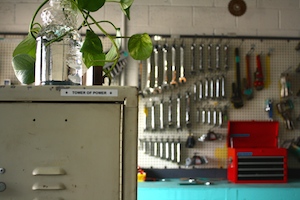 Denverites can begin borrowing tools by purchasing an $80 yearly membership—300 people have signed up already. And your money goes even further than fixing that loose step or refinishing a beat-up table you scored on Craigslist: It also offers you the chance to get involved in DTL’s in-the-works programming, including First Friday gatherings and concerts, sustainability workshops with the Denver Permaculture Guild, educational sessions from Denver Public Library, and a grand opening party on June 5.

“I’m nuts about the community aspect of this place,” Steiner says. “It’s a good opportunity for connection. A lot of the time when you’re making something with your hands, you need help. You need extra hands, and I like everybody getting together to make something happen.”

Although DTL is still awaiting insurance approval that will allow members to work on projects and use tools on-site, Steiner has already seen the collaborative potential in action as DIYers seek advice on how to approach their home endeavors—from your run-of-the-mill baseboard slicing to using a giant drill to inject poison into a rogue tree stump.

The Denver Tool Library is open Tuesdays and Thursdays from 3 p.m. to 7 p.m. and Saturdays and Sundays from 10 a.m. to 2 p.m. Borrowed tools are due for return after two business days. Have an extra tool or two in your garage? Visit DTL’s wish list to see what they’re still looking for.