Yesterday, the American College of Sports Medicine released its annual American Fitness Index (AFI), which ranks metropolitan areas (cities plus their suburbs) on their fitness level. In 2014, Denver clocked in at a respectable fourth, but this year fell down to sixth. While I’m a bit outraged on behalf of the Mile High City, where going anywhere in athletic gear is considered acceptable, I was even more surprised at the region that topped the list both years: my former home, Washington, D.C.

No offense to all the high-powered political staffers who, admittedly, do get their morning runs on the Mall in at 4 a.m. every single day, but there is no way you can beat my granola-loving, ultramarathoning neighbors here in Denver on a fitness index. (When I visited the capital city a few weeks ago and hiked in Shenandoah National Park, some of my friends were wheezing 20 minutes in. This was at 3,000 feet of altitude, maybe.)

I took a look at all the factors involved in the study and compared D.C. and Denver (see chart below for full details; orange is a win for Denver, yellow for D.C., and red if it’s a tie). Not all of D.C.’s wins are flawed—Denver’s mental health could use some propping up, for instance—but I did come up with a few unscientific reasons why the statistics used in this index don’t tell the whole story: 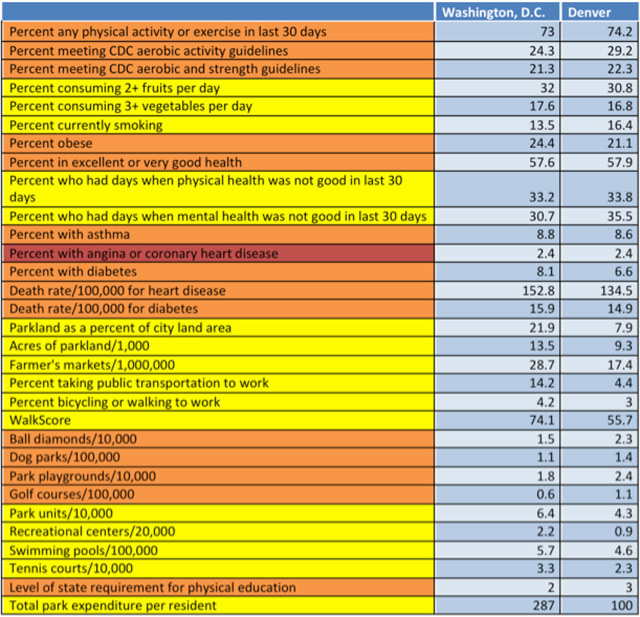