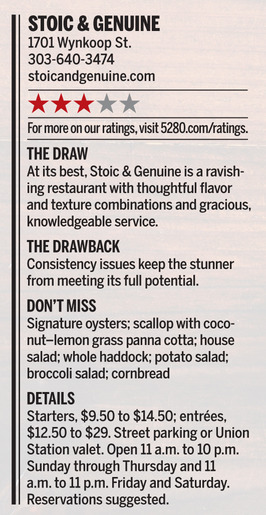 Stoic & Genuine, nationally acclaimed chef Jennifer Jasinski’s seafood sanctuary in Union Station, was so highly anticipated that I invented an excuse to go early. For two years, I’ve given restaurants three months to work out their opening kinks. It’s an old-school approach in an era when consumer critics Instagram, tweet, or post impressions before a spot even opens its doors. I believe places deserve a bit of time to breathe after the scaffolding comes down.

Stoic & Genuine was the opening act of Union Station’s $54 million remodel. It was Culinary Institute of America grad and Wolfgang Puck disciple Jasinski’s first new concept since she brought home a James Beard medal in 2013. The restaurant also came to fruition soon after Jasinski and her chef de cuisine, Jorel Pierce, appeared on Top Chef Masters and Top Chef, respectively. As if that weren’t draw enough, Jasinski and her business partner, Beth Gruitch, the duo behind Rioja, Euclid Hall Bar & Kitchen, and Bistro Vendôme, gambled on the concept: Stoic & Genuine is an oysters and seafood spot situated as far as any major American city can get from both coasts.

At the seven-week mark, I reasoned it was acceptable to grab a drink at the bar for the sole purpose of checking out the space. After all, Stoic & Genuine’s design elements were set, and I wouldn’t write about that drink—good or bad. On a warm Saturday night I squeezed my way through the shoulder-to-shoulder crowd and ordered a nightcap as a ruse to study the room. Despite my sky-high expectations, I sat there in awe of every detail. Dune fencing hugs much of the ceiling, wrapping it effortlessly like a ripple in the sand. I was transfixed by a glass wall filled with aqua and chartreuse globes that were once used as floats on fishing nets. The light that streams into the massive windows is managed by immense steel shutters. On the front-facing wall, Denver portraitist Lui Ferreyra painted the tentacles of a colossal octopus. As I left that night, I looked back on the transportation hub’s newly polished facade and noted that the ampersand in the restaurant’s name recalls the shape of a fishing lure. I calculated the days until it was fair game for me to taste Jasinski’s mile-high take on seafood.

No Ocean. No Worries. Fresh Seafood Flown in Daily. I noticed this text on the door as I walked in for my first official visit. The tagline is an astute neutralizer for anyone who forgets that even coastal restaurants fly fish in. (Le Bernardin isn’t getting its Spanish merluza from the East River, and Los Angeles’ most authentic sushi joints overnight fish from Tokyo’s Tsukiji Market.) Seated on the plaza that night, our server was able to describe wines by using great details about terroir and coastal climate. Without delay, my creamy Alsatian sparkling rosé came in the preferable white wine glass instead of a flute.

That first night we devoured a handful of sharable selections that I still think about months later. Pierce’s Swine & Roe was inspired by an evening when he tasted caviar and Burrata out of a plastic spoon with French master Jacques Pépin and Spanish icon José Andrés. The opulent dish featured breaded and fried mozzarella, a few translucently thin slices of guanciale, and pearls of trout and salmon roe. Next, two pan-seared sardines arrived with a generous swath of sweet pine nut–chile pesto, geléelike dots of roasted lemon purée, and lacy micro-fennel fronds—all as expertly executed as they were beautiful. Roasted Brussels sprouts, a vegetable we’ve seen so much of in recent years, were made new again with a hazelnut cream and chips of maple praline that were so good I fantasized about asking for a bag to go. Jasinski’s potato salad was far more elegant than the picnic side that inspired it: Thinly sliced red bliss potatoes were dressed with a fried-egg emulsion and topped with sliced red onion and crisped Virginia ham.

Our server’s ability to discuss wine was just the beginning of her prowess. She checked back without interrupting our conversation and skillfully read the positions of our forks to know whether or not we were finished with our plates. Between dishes, Stoic & Genuine’s team unobtrusively brought vintage seafood forks and trivets for the next course. When we hailed a waiter unexpectedly, he placed a glass from another table behind his back to indicate we had his undivided attention. What I loved most about the service at Stoic & Genuine that evening was that none of these nods to fine dining ever felt stuffy or contrived. Each member of Gruitch’s front-of-the-house infantry was a natural. 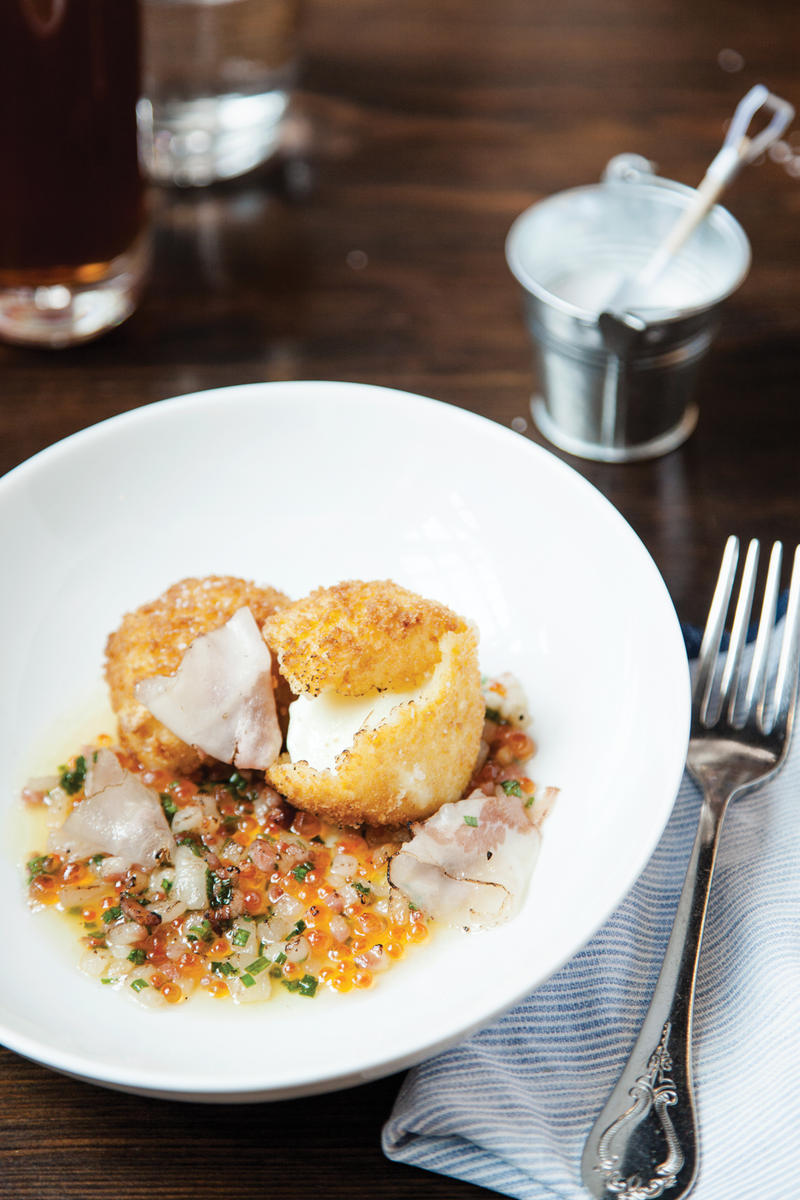 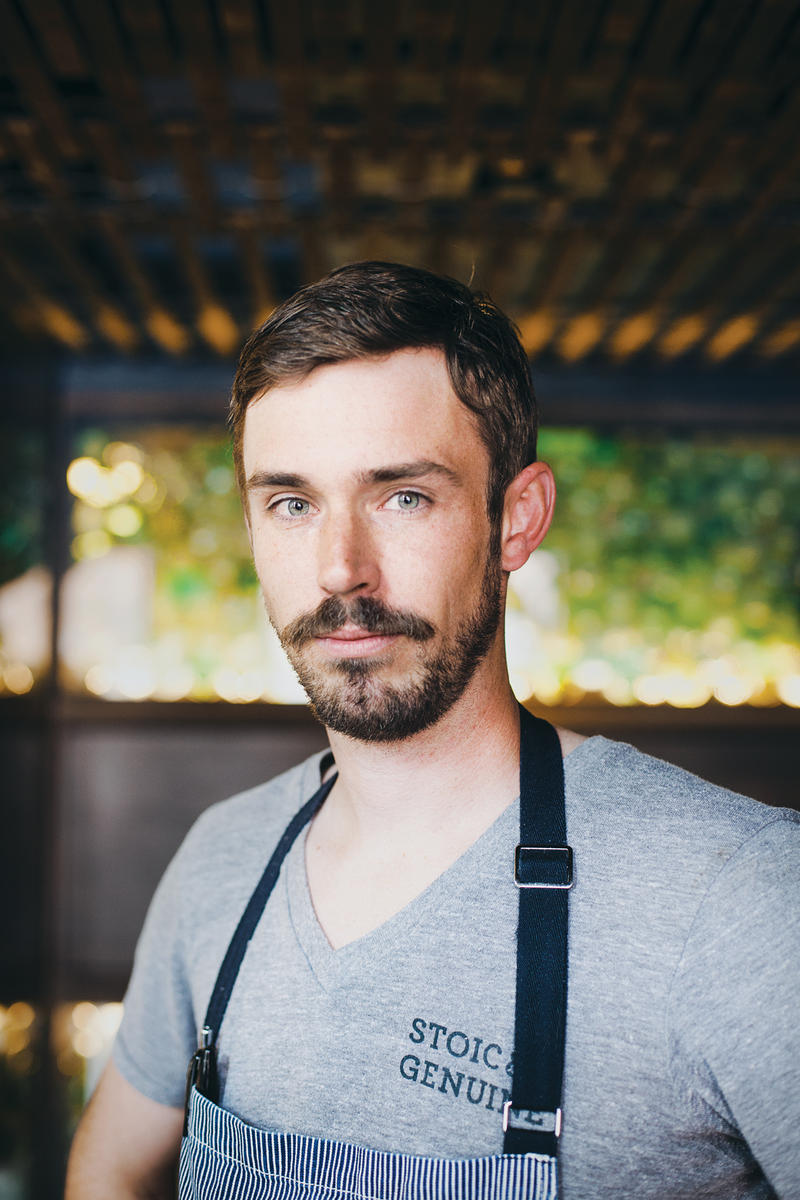 There were moments of such brilliance in subsequent meals, but never again was a trip to Stoic & Genuine as consistent. During another dinner, booze (such as the bourbon for my friend’s Ginger Crane granita cocktail) and beers (from local hop-houses such as Epic and Great Divide brewing companies) were adeptly poured tableside. But my friend’s chicken spatchcock was pink and slimy in places. Worse, our waiter—whose distracted, confused behavior made it seem as if he were in a NyQuil fog all night—never bothered asking us why we’d pushed the chicken entrée aside. Fortunately, my dish was large enough to share: We moved to the middle of our table a crispy haddock, served standing upright on its belly and curved, as if it had been fried the instant fishermen lifted it from Boston Harbor. The haddock, best known for starring in fish and chips, was instead flavored with tastes from the East, such as ponzu, lemongrass, and lime. We each pulled flaky, crisped clumps of meat from the showstopper.

On a visit to the raw bar, I was impressed with Stoic & Genuine’s oyster program. Labeled with repurposed gardening tags, a few of the restaurant’s oysters are raised exclusively for Pierce. The Stoic and the Genuine bivalves I ordered that night, for example, come to him from the waters of Long Island and Washington state, respectively. More impressive, they were absolutely flawless. When I asked the 31-year-old his secret for training Stoic & Genuine’s shuckers, he didn’t talk to me about some special knife or when the oyster gets flipped. “We empower them to use the trash can,” he said of his cooks, all of whom take turns shucking. It was a costly but commendable philosophy Pierce echoed no matter which dish we spoke about.

I was also smitten that night at the raw bar with a sliced Georges Bank scallop. It came alongside a bar of coconut-lemongrass panna cotta and a cluster of plantain crisps that resembled a clump of sea kelp and served as a textural counterpoint. Diced pineapple compote, bright green kaffir coulis, and orange curry vinaigrette gave the plate both heat and sweet. But later that visit I tried an octopus dish that was unexpectedly gummy. Stoic & Genuine thinly slices its octopus legs on a bias specifically to release a gelatinous underbelly. “Cutting it the way we do,” Pierce told me in a phone call, “we unlock this beautiful little layer of fat that acts in a cast-iron pan like pork belly does.” That sounded lovely, but the night I had it, that layer of fat wasn’t seared enough, leaving the whole dish—even an otherwise thoughtful pistachio pesto—tacky.

A lunch visit was equally mixed. On the one hand, the daytime staff rightly noted that my girlfriend and I had an infant in tow and quickly set a four-top to give us more room. Our server carried our drinks from the bar to our table upon seating us. A salad that we casually mentioned we’d share was split without our asking. Our server was able to talk through dish preparation with impressive detail and tell us about ingredient notes that weren’t hyped on the menu—a smoky oyster po’ boy included ribbons of house-brined pickles, for example. But during that same meal, the rye slices on an otherwise gorgeous beet-cured salmon sandwich were over-charred. At the end of our meal, when we were told the restaurant doesn’t carry any diet soda —a noble choice but one that demands suitable stand-ins—I was disappointed at the lack of alternatives, such as cold-brewed coffee.

On that final lunch visit, I was surprised that—for a restaurant that spared no expense—coat storage had been overlooked. For many of my meals, jackets, shawls, and bags littered the banquets and backs of chairs in an otherwise elegant space. Shipping seafood in daily is necessarily so expensive that I witnessed one party walk out when they saw the cost of menu items. At these prices, Stoic & Genuine needs to be thinking about even minute details such as a coat closet. All day, every day.

Whether it’s coats or the bias-cut of an octopus leg, there is no doubt that Jasinski, Gruitch, and Pierce are subjects under a high-power microscope. They opened with enough buzz to draw an old-school critic in early. And they haven’t taken any shortcuts to soften such expectations. One night, I ordered Stoic & Genuine’s shrimp and squid coctel del mar. Before it was served, an empty bowl for shells arrived, serving to propel my anticipation for the dish. Once the starter landed on our table, however, I realized that the pomp and circumstance of that bowl was for the singular tail of a shrimp garnish.

I’m not suggesting Jasinski and her team dumb such details down. This is a group we can (and should) expect to rise to even the most vaulted expectations. But they still have work to do. Like the historic train station columns that were among the design details I studied that first night, the pillars for a smash hit are in place. Jasinski and Gruitch have been pushing Denver’s food scene forward for 15 years. Their fans, myself included, would be wise to give them some patience in return.