I think about festivals like Coachella and Bonnaroo, with attendance levels that hover around 80,000, and I feel a little sick. Not because of the music, but—as anyone who has ever cleaned up a large festival can attest to—because of the amount of waste left behind and the emphasis on profit. Festivalgoers travel hundreds of miles to attend these festivals, where partying takes precedence, and the ensuing wreckage would force even the slightest environmentalist to reconsider their summer plans. Those same people have to travel home, typically by car or plane, again adding to the event’s carbon footprint (the single greatest enviromental impact of music festivals is the travel to and from).

Before there was Electric Forest Festival, a 30,000-person festival in Michigan, there was Rothbury Festival on the same site, which I volunteered to clean up for a week after the 2009 event in exchange for a free ticket. I joined as part of the Green Team, drawn by the event’s promise of delivering “cutting-edge sustainable initiatives.” I can say from first-hand experience that the entire thing was a facade, as our Green Team watched recycling get thrown in with trash (except for aluminum cans, which we sorted and recycled ourselves in exchange for gas money). For a week our small team waded through a sea of abandoned camping gear, plastic water bottles, clothing, and rotting food. The New York Times cited the festival as having prevented 55 percent of the waste from the campgrounds from entering a landfill in 2008, and ever since, I’ve become seriously skeptical of fests where “greening” is used as a marketing tool.

As a music writer and lover, however, I knew I couldn’t abandon festivals altogether. The next year I was invited to attend the Telluride Bluegrass Festival for the first time. Now, this festival—with its roughly 10,000 attendees—is by no means small, but the event boasted a long history of quality tunes and a short history of environmental stewardship, all of which appealed to my jaded self. 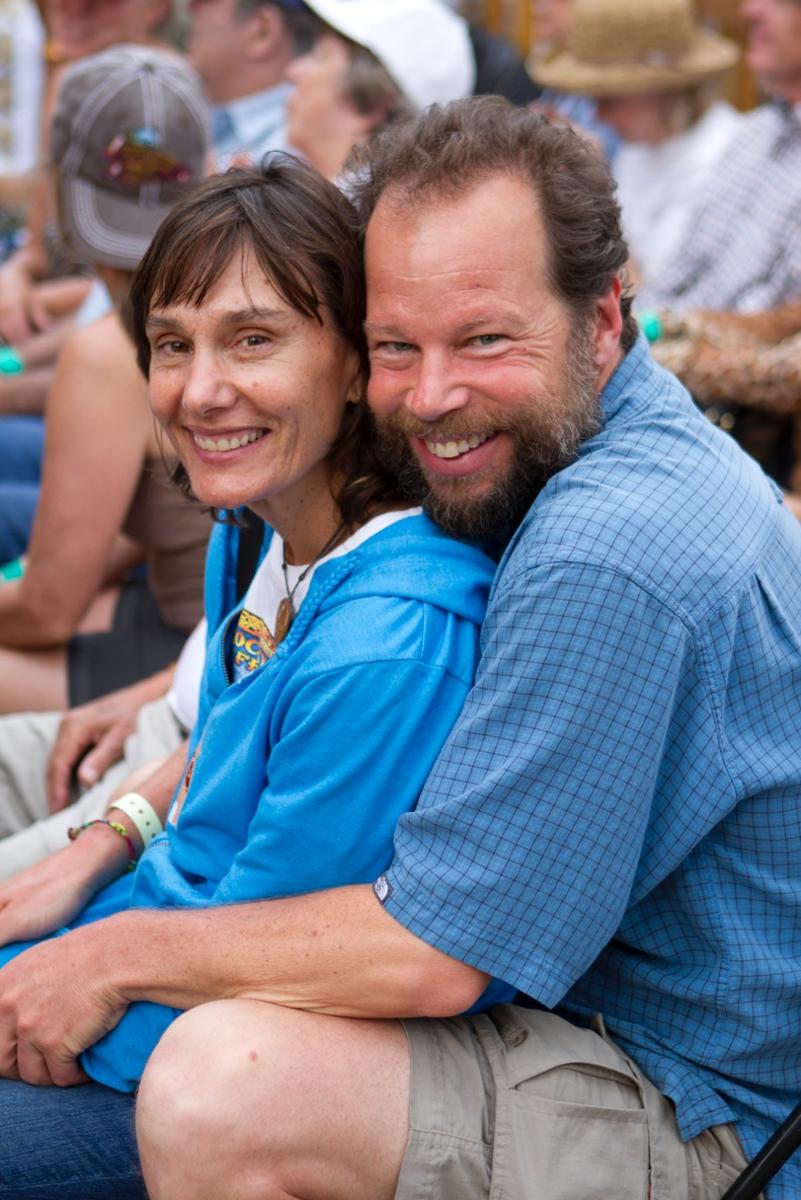 Not to mention that it was held annually over the summer solstice in Telluride, renowned for its isolation and pristine mountain views. Though not everyone respects the land Telluride sits on, I think most attendees are cognizant of their environmental responsibility with that first glimpse of Bridal Veil falls.

Though the fest is far from perfect in terms of its environmental impact, it mandates a laundry list of sustainable initiatives and incentivizes? even more. I spoke with Steve Szymanski (pictured at right with wife Carli Zug), vice president and co-founder of Planet Bluegrass, about his role spearheading the company’s sustainability program…and just what exactly it entails.

On getting involved with the Telluride Bluegrass Festival

“I’ve been passionate about music my entire life. I started playing guitar when I was young, and got involved in music studios and rock bands. Like most things in life though, it was happenstance how Craig [Ferguson] and I—partners in Planet Bluegrass—came together. I worked with an ex of his in a restaurant, and had known him socially. I had also been to the [Telluride Bluegrass] Festival, and I thought it had amazing music, and was an amazing place.

I later ran into Craig on the street in Boulder when I was looking for a place to live, and he explained he was trying to re-organize the festival. He asked if I would be interested in getting involved. We were essentially the co-founders of Planet Bluegrass back in ’88, and 1989 was Planet Bluegrass’ first Telluride Bluegrass Festival.”

On his evolving role

“Initially, I worked part time filling in niches. Within a few years it became a full-time gig, and my goals changed—I’ve always been more excited about the educational aspects that are possible with festivals. My real excitement is around schools, and bringing the performers in to teach what they do, and the sustainability part was another thing that came out of my personal interests. I also had the first kids in the company, so immediately I said we needed a family area.”

On New Belgium Brewing’s role in greening the festival

“Sustainability came along a little later. That was more in the early 2000s, when New Belgium Brewing came on as a sponsor. New Belgium was instrumental, because they had hired Hillary Mizia as their sustainability outreach coordinator, who’s job it was to think about these things 24/7. One of New Belgium’s missions is to make greening fun, and that fits in great with the festival setting. Whatever we’re doing, we’re not going to be heavy handed or mandate things. Rather, we’re going to offer incentives and try and change behaviors through fun activities, education, and interactions.” 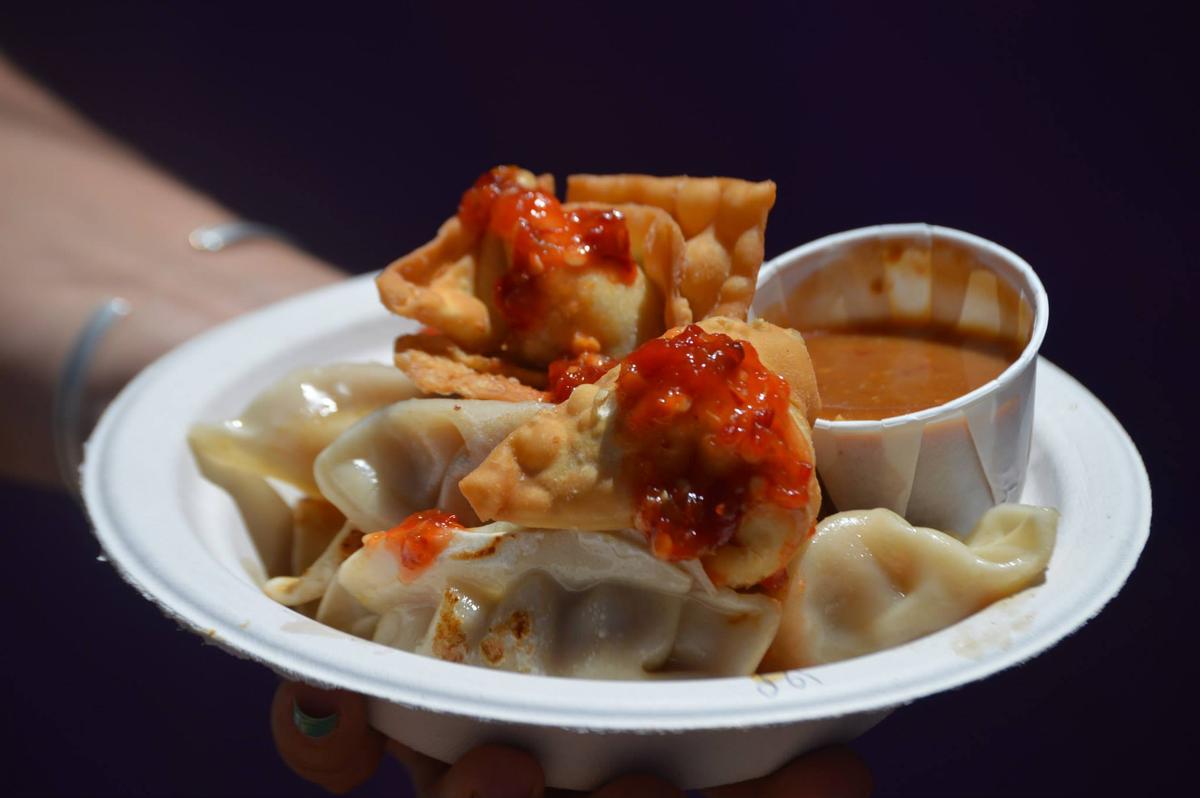 One mandate for all of Bluegrass’ vendors: They must serve food in compostable materials. These dumplings are from Lyons-based Sisters Pantry. (Photo Credit: Kiran Herbert)

On the festival’s environmental firsts

“Early on, the biggest breakthrough for us was to start composting. We were able to bring all of our compostable stuff—food waste, and all the containers and things—up to a farm 16 miles away, where it was composted for us. It was a huge breakthrough, not having to bring all the compost down to Naturita to the landfill. The big piece of that was finding compostables, because hardly anyone made them back then. So I made phone calls and enlisted Cargill, one of the biggest companies in the universe. They had this subsidiary that had been working on this corn plastic, so they came on board as a sponsor and were able to subsidize the cost of the compostables. We had them come to the festival and talk to the vendors about why we were doing this, and what the benefits were. It changed behavior in a big way, which is always a big deal for people at first.

That same year, we also found Renewable Choice Energy in Boulder, and they basically connect people who are producing renewable energy with people who are trying to buy it. That was 2003 when we first started composting and purchasing renewable energy. All along, it really took having partners to help us, either by subsidizing us financially, or by helping with their knowledge of how to do these things. That’s been a trend all the way through to now.”

“In 2004, we introduced the world’s first corn plastic bottle. A couple years after, we realized we shouldn’t worry about compostable water bottles, but really, we should be thinking about reusables. That’s when the water station idea came about. It cost about $3,000, and we had to buy commercial-grade filters to filter out chlorine and solids. We basically brought the Telluride snow melt and high lake water back to spring water. We were sick of going to Red Rocks and paying $8 for a plastic water bottle. Free filtered water became our mantra.”

On bluegrass’ most significant environmental initiative

“We’re committed to offsetting all the energy at Telluride, including the travel to and from the event. That’s an interesting, voluntary thing that we do, as our government has never set any regulations or mandates to purchase renewable energy. This is something we’ve been committed to since 2007, when we got an award from Governor [Bill] Ritter for all our environmental actions. We spent $30,000 that first year to purchase enough carbon offsets to offset the travel of all the artists, all of the festivarians—that’s 12,000 people basically—the lodging folks, the shuttle system, all our vehicles going to and from the event. We’re really trying to neutralize the event, so that for every bit of gas that goes in there, we try and support efforts to neutralize those emissions. That’s probably the most we spend financially in all our greening efforts.

[To figure it all out] we look at ticket data—like the number of tickets sold in every state—in this huge spreadsheet we maintain. For example, we look at all the tickets sold in Virginia, and then we cross-reference with our survey data, which tells us that maybe 24 percent of people fly. So then we look at the main airport hub, etc. There are a dozen or so assumptions we make when we’re putting this all together, but we’re conservative in how we do it. It’s impossible to quantify it exactly, and I will never admit to trying to do so. We spend a lot of time trying to get it close though, and we have a lot of professional help.” 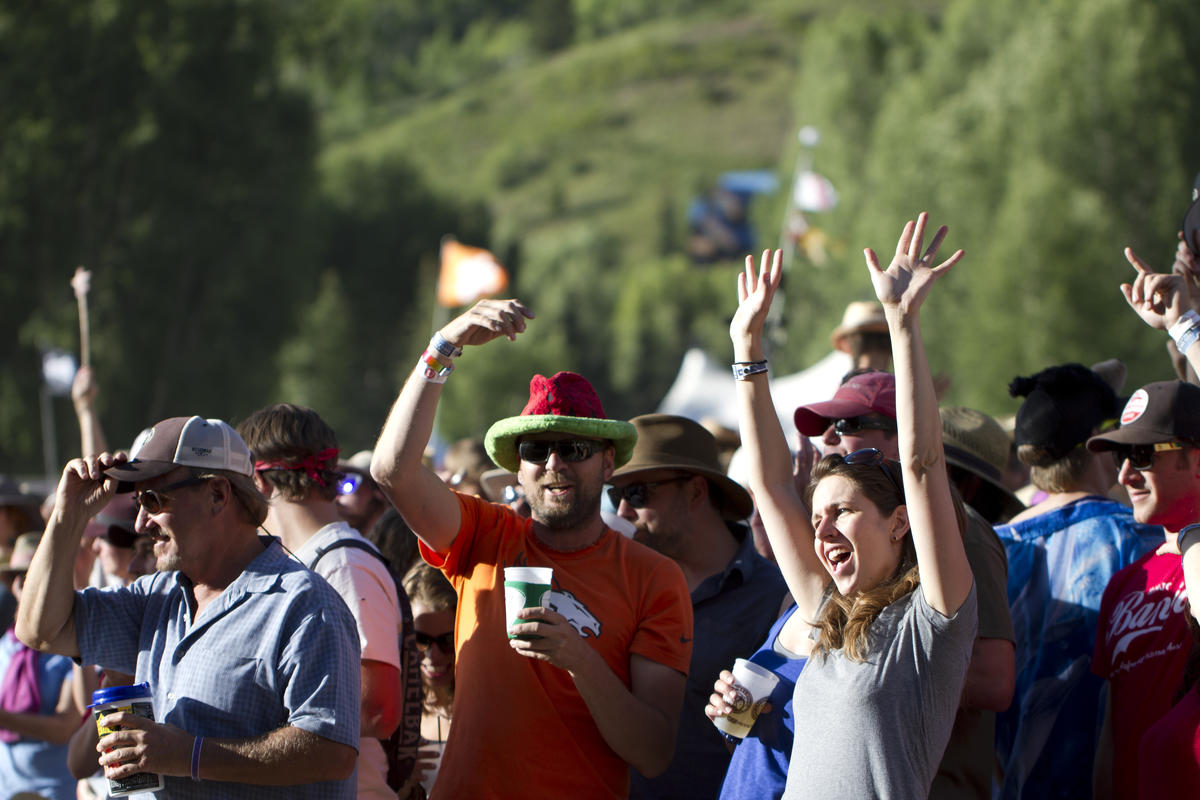 “At Bluegrass, the weak link is the camping, because we don’t check everyone’s bags or cars when they come in. You wouldn’t believe how many people bring throwaway camping gear, and all kinds of stuff. So in the festival grounds we do really well, but if you look at the entire festival, with 3,000 people camping, we diverted 60 percent last year. That means 60 percent of all the waste generated at the festival did not go into the landfill. It went into compost or recycling. It’s really the campers that are leaving stuff at the end of the festival, so we introduced a bunch of incentives. We do the Campsite Challenge, where we encourage campers to nominate one another for cleanest campsite in exchange for festival tickets, and that’s been going on for eight years now. We also hand everyone compost bags in the campground, and we work with Leave No Trace on that end. Camping’s an area we have to work on, so we educate beforehand by telling folks what to bring.”

“Having humility has enabled us to be successful, because we’ve really learned that all these things are always changing. The science comes out and it’s different…the whole climate change toolkit is constantly evolving, and I think we’ve really been successful in working with a lot of different people and having different input over the years. Now, we can all personally and professionally think about these issues and make them part of our consciousness in whatever we’re doing. It’s about being willing to change and staying open minded, because as soon as you think you’ve found a solution, it changes. We know we’re a work in progress.”

If you’re attending any festival this summer, be sure and checkout Planet Bluegrass’ Sustainability Doctrine to see what you can do to reduce your impact. If you’re lucky enough to be attending the Telluride Bluegrass Festival this year, do your part: Visit the “Hitching a Ride” forum for carpooling opportunities, educate yourself at Greentown in Town Park during the festival, and fill out the survery after the weekend’s over.