On a rainy weekend in mid-September 2013, the five members of the Lumineers walked onto the stage at Red Rocks Amphitheatre for the first time as a headlining act. A night at Red Rocks remains one of the most coveted gigs in popular music, and anticipating the significance of the moment, the band had prepared a surprise. On the second night of back-to-back shows, about halfway through the set, lead singer Wesley Schultz leaned into the mic and announced, “We brought some special guests with us—it’s an honor to play with the Colorado Symphony Orchestra!” Stage lights flicked on, illuminating a few dozen musicians seated in a semicircle behind the band. The nearly 10,000 rain-soaked fans erupted.

At that point in their careers, it seemed as though the members of the red-hot Lumineers could have talked just about anyone in the music business into a guest appearance at Red Rocks. Since releasing its self-titled debut album a year and a half earlier, the indie-folk quartet had blossomed into one of the most popular bands in the country, selling more than a million copies of its record and performing the hit single “Ho Hey” in front of 18,000 screaming fans at the Grammy Awards in Los Angeles. But instead of inviting a high-profile pop star to punctuate one of the biggest moments in the band’s brief existence, the Lumineers opted to collaborate with some of the finest classical musicians in Colorado.

For the next 45 minutes, the Lumineers performed several of their hits, each accented by the soaring accompaniment of the Colorado Symphony Orchestra (CSO). After the main set, the band returned for an encore, and Schultz once again addressed the crowd. He thanked the symphony for joining them onstage and then singled out two individuals, by name, for their integral roles in the night’s performance. One of the people was symphony conductor Scott O’Neil. The other was a Denver musician named Tom Hagerman, best known for playing violin and accordion in the gypsy-rock band Devotchka. In the weeks before the show, Hagerman had done something few rock ’n’ rollers are capable of: He had painstakingly composed every note each member of the orchestra played that late summer night.

One afternoon this past spring, Hagerman sat in a metal folding chair in his cluttered Whittier garage, hunched over a MacBook, staring at a computer program called Sibelius, which is sort of like Microsoft Word for music notation. A tall, slender 38-year-old, Hagerman has been part of the Denver music scene for more than a decade. He graduated from the University of Colorado Boulder in 1998 with a degree in violin performance, and after a brief stint in New York City—where he thought he might eventually make a living as a classical musician—he returned to Colorado and settled in as a member of Devotchka. The group formed in the late ’90s and gained national attention in 2006 after composing the film score for the hit movie Little Miss Sunshine.

Hagerman tapped his computer’s space bar, and a song by Denver singer-songwriter Ian Cooke began to play. “I’m hearing almost like a Mozart kind of thing,” said Hagerman, who was commissioned by the Colorado symphony earlier this year to write the orchestra parts for a show with Cooke. “I thought maybe the viola and the cello could play these little classical motifs.” As the music scrolled across the screen, the program emitted a sort of robotic-sounding version of the notes Hagerman had written for the orchestra, as if Siri were singing the melodies. 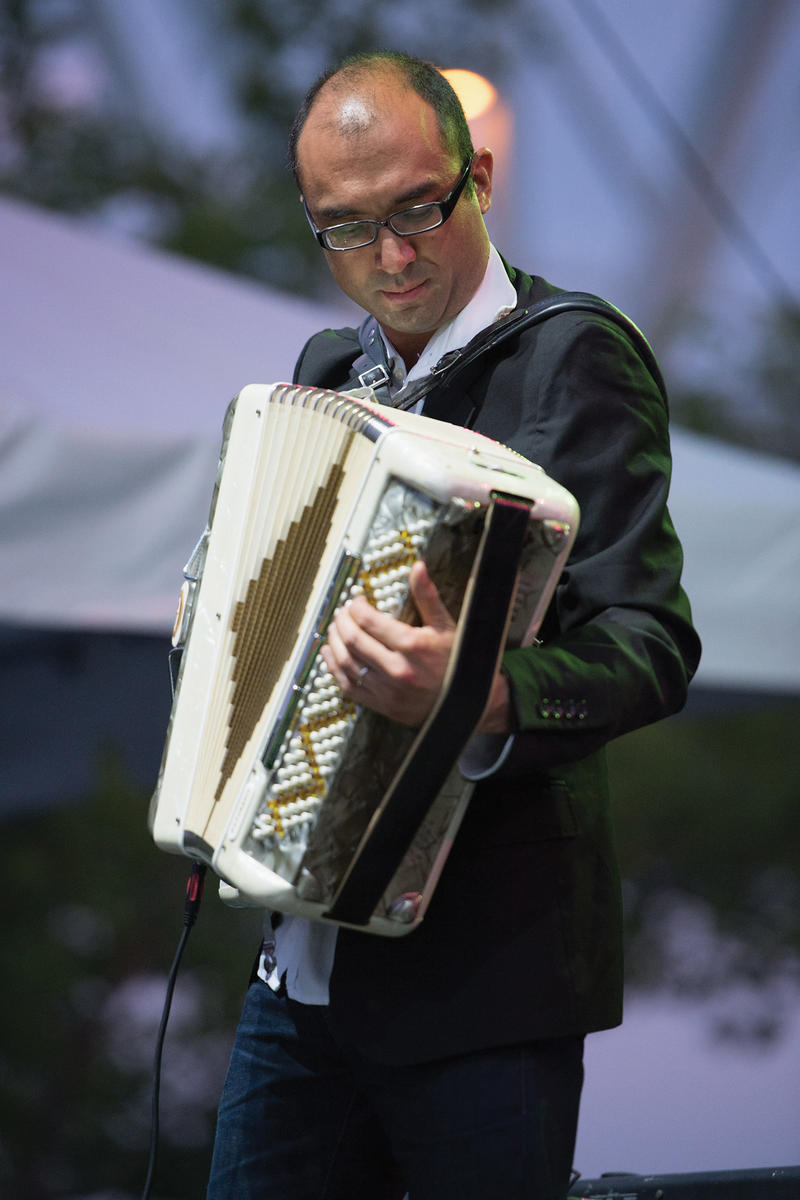 The idea of symphonies collaborating with rock and pop musicians is nothing new: Everyone from Metallica and Aerosmith to the Moody Blues and Elton John have performed with full orchestras. During the past several years, however, the style has experienced a renaissance. Contemporary artists including Beck, Sufjan Stevens, Arcade Fire, She & Him, and the National have all used string sections extensively on recent albums. And classical groups such as the Hollywood Bowl Orchestra in Los Angeles and the CSO have developed national reputations for adventurous collaborations with pop musicians. “We’re always trying to grow audiences and find new ways to be relevant in the community,” says CSO senior vice president of program innovation Tony Pierce. “Symphonies do more than just play traditional classical music these days.”

Pierce began to develop these types of shows when he joined the Colorado symphony staff in 2010. “I saw an opportunity with this market,” says Pierce, who had previously organized similar collaborations while working with the symphony in Charleston, South Carolina. “Denver is arguably one of the most active music markets in the country, and we have this unique asset in Red Rocks.” His first year in town, he lined up three gigs, accompanying Chicago, Idina Menzel, and Sarah McLachlan. But his long-term plan was to forge new relationships between the orchestra and local musicians. Pierce familiarized himself with the Colorado music scene and quickly came across Devotchka. “The band,” he says, “clearly had the chops to lend itself to orchestration.” In 2011, Pierce approached Devotchka’s manager, Rob Thomas, about a joint performance.

Thomas shared the news with the band one night backstage at the House of Blues in Chicago. He explained that the music for the orchestra—a “chart,” in music parlance—would have to be written quickly and suggested hiring someone to do the work. Hagerman balked at the idea of having an outsider compose the music. “Those were our chords and our melodies. I wasn’t going to let someone else do that,” he says. “Not to mention it was the fucking Colorado symphony.” Hagerman later told his bandmates he would write the music himself.

Many rock musicians can’t read music, let alone understand the complex layers and movements of an entire symphonic piece, which can involve a dozen or more parts played simultaneously. And although Hagerman didn’t have much experience writing for a full orchestra, he did have a background in classical music. He’d studied violin in college, performed briefly with the Boulder Philharmonic Orchestra, and wrote the string arrangements for Devotchka’s records. (He’s also composed and played string parts on other albums, notably for Calexico and soul singer Bettye LaVette.) Hagerman viewed the chance to write for the Colorado symphony as a unique opportunity. “It’s rare that someone in the band would do the charts,” he says. “I guess I felt like I had something to prove; it never occurred to me that I would get to a level where I thought I could write for those guys.”

Hagerman secluded himself in his garage and, over the next three months, translated much of the Devotchka catalog for the orchestra—something of a crash course in symphonic arranging. The band played its first symphony show in early 2012 at the Boettcher Concert Hall. In August of that year, Devotchka took the act to Red Rocks, and they’ve returned each year since. (Three years ago, the band released one of the performances as a live album.) This month marks the group’s fourth concert with the orchestra at the natural amphitheater. As Pierce puts it, “It’s kind of become a franchise.”

The success of the Devotchka shows has helped spawn dozens of other CSO collaborations with local and national bands, such as the 2013 Lumineers gig and others with Guster, Rodrigo y Gabriela, and Béla Fleck. Hagerman has continued to work with the symphony, becoming one of the group’s go-to arrangers and composing charts for the Flobots, Gregory Alan Isakov, and Amos Lee. “Tom’s worked on charts for all kinds of people,” says Pierce, who also frequently employs a South Carolina–based arranger. “Each time I get a batch of charts, they’re better than the last one; it’s fun to see their work in progress.”

That afternoon in his garage, Hagerman fiddled with the computer file that contained the music for the Ian Cooke performance. He was also working on string arrangements for the Denver indie trio Land Lines. “With Ian Cooke, it’s kind of funny because it’s the polar opposite of what Land Lines is,” Hagerman said. “He’s very flourishy, and Land Lines is super-specific—it’s almost hard to write anything underneath them.” The music for Cooke and Land Lines was part of a late May show at the Boettcher Concert Hall dubbed “Turn Over the Keys,” an effort by the CSO to expand these types of concerts to venues other than Red Rocks.

Hagerman likes to joke about how working with the symphony means he’s often sitting at his computer, something that as a musician, he’s always tried to avoid. He sometimes thinks back to his days in New York and remembers playing $60 violin gigs with an old Russian woman who always told him, “If I were you, I would go back to school for computers.” “Now,” Hagerman says, somewhat ironically, “I’m always in front of a computer.” This month, though, he’ll step out of his garage, away from the glow of his MacBook, and into an altogether different light: the fluorescence shining onto the stage at Red Rocks, illuminating Devotchka and the Colorado Symphony Orchestra.