Catching the tiki trend has proven to be an elusive feat across the country. Some cities like New York have a decades-old relationship with tiki bars, fraught with highs and lows—and more highs and lows—and seem to be in the middle of another low. But others like San Francisco and Chicago are cheersing to their own thriving tropic shops, causing whispered rumors of an upsurge—we’ve even got one of our own here in Denver. But are we chasing an umbrella-festooned phantom, or are we finally ready to say: Yes—it’s tiki time.

Here’s what the eyes-and-ears of booze in Denver have to say about it.

Tiki drinks are like an elephant perched on a tightrope. There are tons of ingredients all layered in there and when they work they’re amazing. If something is slightly off, it will fall flat. They’re very difficult to do well and that puts a mark against it being a trend this year.

What I love about tiki is that they’re not these really rustic cocktails where you’re proving how adult you are by drinking whiskey neat. Three to four years ago you could have gotten away with calling them girly drinks, but in this day and age that’s inappropriate and crass. The reality is they’re boozy punch drinks. And they’re really fun. And if those are girly drinks, sign me up! Denver likes nice things but somewhat unadorned. Tiki is seen as indulgent in a way that doesn’t ring with the rest of the culture.

When Adrift [in Denver] opened, it seemed like there were a few tiki joints opening up across the U.S. but it didn’t really latch on as quickly as other cocktails trends I’ve seen. I’ve seen people slowly get a little more interested. I think it’s gaining momentum, but it might be more like the turtle and the hare. I think a lot of it comes to location, location, location; we would see a lot more tiki drinks if our humidity was quite a bit higher and it was hotter in Denver. Tiki cocktails are generally sweeter, and with alcohol, people do get adventurous but they stick to their safety zone. They might branch out, but they’ll go back to that Manhattan.

Tiki drinks are the drinks that bartenders love, like our favorite songs that we keep on our playlists. I think the rising popularity shows we’re moving forward in the knowledge of our industry—we mastered the classics and now we’re moving on to the cocktails that give us the opportunity to play with new and exotic flavors and ingredients. As our bar culture grows, we’ll keep expanding on that. This may not be the biggest summer for tiki. It may keep growing after this year, but I think we’ll definitely see an uprising in tiki cocktails.

Verdict: Not this year

Everyone agrees that tiki is catching on in Denver—but we’re just not quite there yet. Until then, here are some cocktails for you to mix up at home, courtesy of Layman and Burke. Remember, the best tiki drinks are deliberately complex and precariously balanced. You have to ride the line between tropical perfection and garish belly-flop, so stick to these ingredients and measurements as closely as possible.

Add all ingredients to mixing tin, top with ice, and shake vigorously. Strain into a double old fashioned glass and top with crushed ice. Garnish with a parasol and orange slice.

Note from Layman: We purchase our coconut cream at Ocean Pacific Mercantile, but if you can’t find it, Coco Lopez brand coconut syrup works great, with no need to prepare. 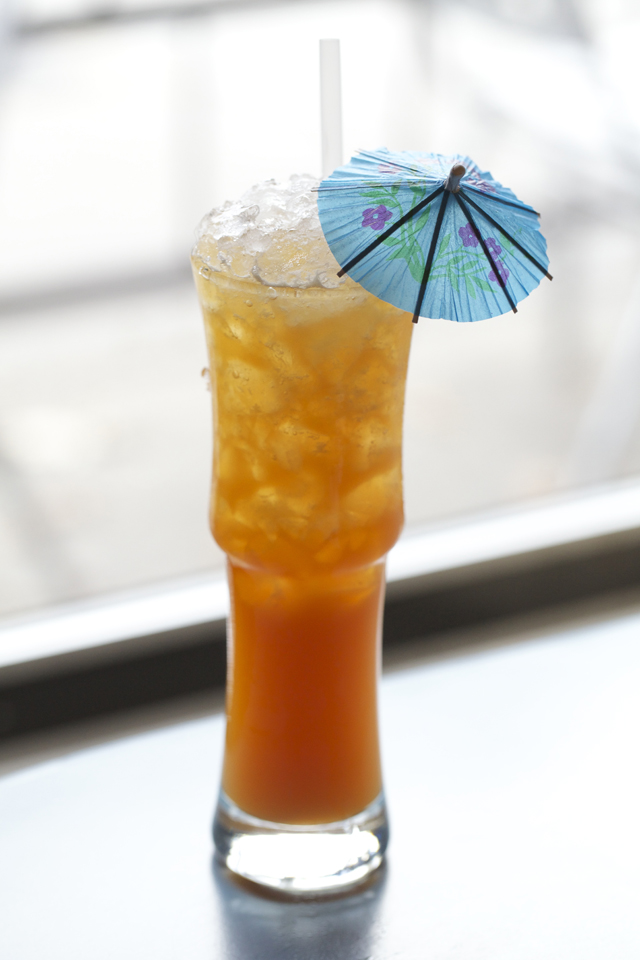 Add all ingredients to mixing tin, top with ice, and shake vigorously. Strain into your favorite tiki glass and top with crushed ice. Garnish with a parasol.

**Note from Layman: There are several ready-made falernums available for purchase that work great in cocktails, the most ubiquitous being Taylor’s Velvet Falernum.

Hell in the Pacific

Add all ingredients to mixing tin with small scoop of crushed ice. Shake briefly to chill and combine. Dump, un-strained, into a tall pilsner glass and add a heaping scoop of crushed ice to fill the glass (this drink needs dilution!). Garnish with a lime wedge and a parasol.

Tip from Burke: Brands aren’t necessarily important for ingredients, but if you see one, it’s usually specified for a reason.

For the ambitious home bartender

*How to make cinnamon syrup
1/2 cup water
1/2 cup granulated sugar
1 cinnamon stick
Simmer all ingredients together until sugar is dissolved. Allow to cool.

Add all ingredients to a mixing tin with a small scoop of crushed ice and shake quickly to combine. Or add half a cup of crushed ice and give it a quick whirl in a blender. Strain into a tall collins glass and fill with crushed ice. Swizzle the drink until exterior of the glass frosts over. Garnish with a lime wheel and grapefruit chunk. Don’t forget the parasol!

Insider tip: Get two-for-one tiki drinks at Colt & Gray and Ste. Ellie with the Denver Passport.