Flavorful, richly-spiced cuisine paired with the intricately patterned, lantern-lit backdrop of Morocco proved just the inspiration we needed to revamp the standard summer barbecue. This three-part series provides planning inspiration and how-tos for executing your own Moroccan-style outdoor evening.

Don’t miss the other articles in our Summer Entertaining series:

Part I: Setting the Scene

PART II: SPICE IT UP

We’d be remiss to talk Moroccan fare without discussing the fragrant spices that make it so memorable. For a quick education, we turned to spice expert and spice-trade history buff Dan Hayward, owner-operator of Boulder’s Savory Spice Shop.

5280: Moroccan cuisine is recognized as having many influences, including Mediterranean, Arabic, Spanish, and Berber (North African). Can you talk about the most important influence in terms of spices?

Hayward: In the seventh century, Arabs brought in grains like couscous and spices. Arabs were in control of the spice trade for about 900 years, until the 1400s. In the 1400s the Portuguese and maritime routes came on board. The overland [Arab] routes became secondary to the maritime routes. The Persians and Moors, from southern Spain, also had a big influence on Moroccan cuisine. 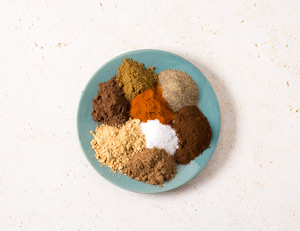 What are the classic flavors and spices in Moroccan cuisine today?

Saffron, cumin, coriander, cinnamon, ginger, and red chiles (cayenne or Aleppo peppers). Preserved lemon too—that is a fun one—it is such a fascinating flavor. The salt brine cuts down the bitterness of the rind and makes the entire lemon edible. Olives and figs and dates (dried fruits) are also common. Moroccan cuisine focuses on lamb and poultry as the main protein sources and couscous as the grain.

Any favorite spice combinations or blends to recommend?

The most famous spice blend is called ras el hanout. It means, “top of the shop” or “best of the best.” Every spice merchant or spice wallah has their own version. Ours has ground nutmeg, sea salt, black pepper, ginger cardamom, mace, cinnamon, allspice, turmeric, and caps off with some hand-crushed saffron. It makes a sweet and savory dish with beautiful color.

We also carry Tan-Tan seasoning (named for a province in Morocco) and one called Marrakech Moroccan Spice. Harissa is used as a side spicy condiment (we sell a dried, ground version). 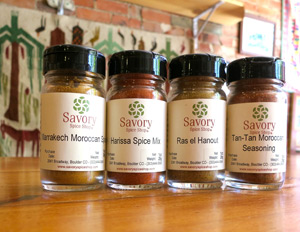 How do you recommend eating and cooking with these spices?

Hayward: Buy a good clay tagine. [The earthenware pot] is an amazing, remarkable way to cook. It creates a nice sauce or stew at the bottom of the cooking vessel. A tagine is basically a Moroccan Dutch oven, and you can cook with it in oven, or on the stovetop. A really easy way to do tagine cooking without actually purchasing one is to use a clean clay flowerpot. Flip it over, line it with parchment, cover hole with foil, and voilà you have a little tagine!

Yes; we have a recipe section on our website. Under “flavors” choose “Middle Eastern” and you will find Moroccan recipes there. The cinnamon-lemon couscous (recipe below) is simple and delicious. 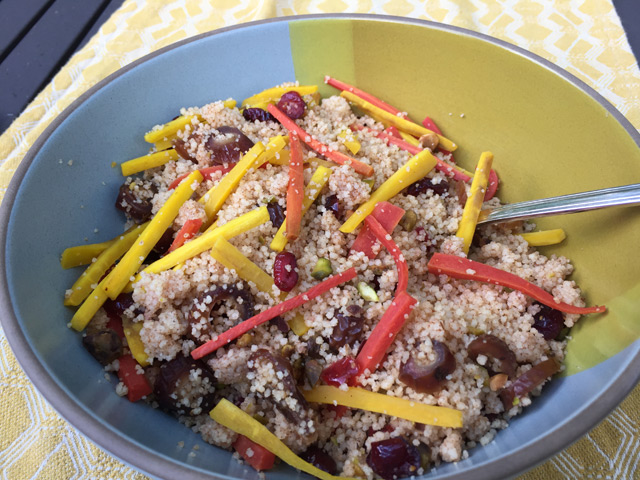 In a medium saucepan, combine vegetable stock and lemon juice. Stir in salt, cinnamon, onion, and garlic, and bring to a boil. Remove from heat and stir in couscous. Cover and let stand 5 minutes. Sauté carrots in a pan for 5 minutes over medium-low heat. Fluff couscous with a fork and transfer to a large bowl. Add carrots, nuts, dates, and cranberries, and stir together until evenly distributed.