Patrick Scanlan squints into the September sun as he gets up from his table at the Woody Creek Tavern. The upstate New York native slips on his sunglasses and walks across the street to his white Land Rover, which is covered in red dust from the area’s sandstone cliffs and unpaved roads. Scanlan is tall and lean, and he walks with an efficient saunter. With the wave of an arm, he gestures that the doors are unlocked. I pull at the handle—and out tumbles a large, tawny-skinned potato. I bend down to pick it out of the mud, then climb into the passenger seat. • We’ve spent the past hour discussing the nuances of potato vodka, the signature spirit of Woody Creek Distillers, which Scanlan founded in 2012 and co-owns with his wife, Mary, and friend Mark Kleckner. We’re headed to walk the fields that feed the operation. There are two main plots: The expanse just beyond Scanlan’s house is reserved for the distillery’s prized Stobrawa potatoes. The other field, which sits inside the confines of the exclusive Chaparral Ranch, is home to the Rio Grandes, russets indigenous to the Roaring Fork Valley.

When I hand the errant potato to Scanlan, he grins. “Stobrawa,” he says, bouncing it up and down in his hand as if pondering its weight, both literal and figurative. This is, after all, the elusive potato that started it all. With a shrug, he places the tuber in the middle console and throws the truck into reverse. 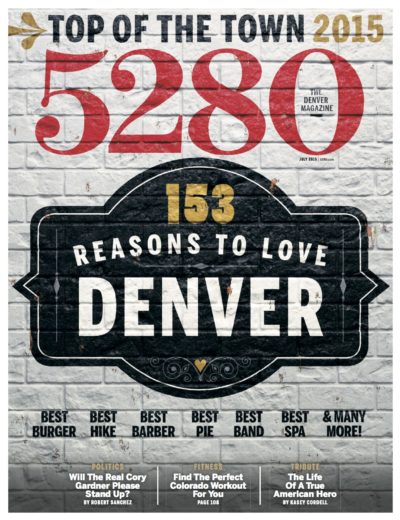 Scanlan, who is 51 years old, isn’t your typical potato farmer. Before retiring in 1998 to Woody Creek, an offbeat community outside Aspen made famous by former resident Hunter S. Thompson, he worked as an engineer for the missile and space industry within the Department of Defense. (Scanlan had top security clearance.) Despite being technically retired, it’s not in Scanlan’s genetic makeup to take it easy. You can almost hear his mind humming as it processes his projects: raising Black Angus cattle, breeding hunting dogs, farming rye and red corn.

In 2006, he was looking for a new hobby. The craft spirit movement was in its infancy, but Scanlan recognized the potential—and he had the land, the water, and the capital to do distilling right. Eventually, he called his buddy Kleckner, a fellow engineer he’d met while collaborating on a project for NORAD (North American Aerospace Defense Command), and told him the plan. Kleckner laughed. A year later, after looking closely at the industry’s potential, Kleckner called back—he was in. 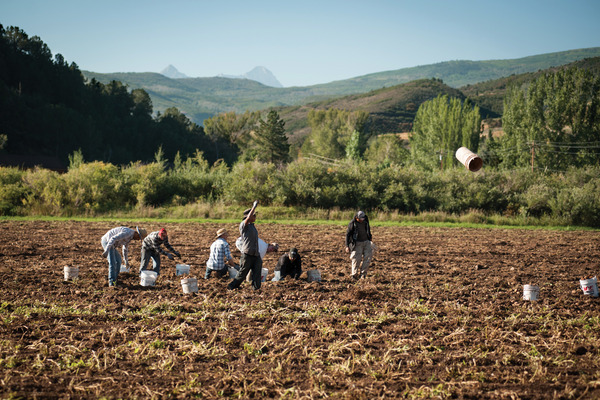 Depending on the weather, the crews harvest potatoes from early September to late October. 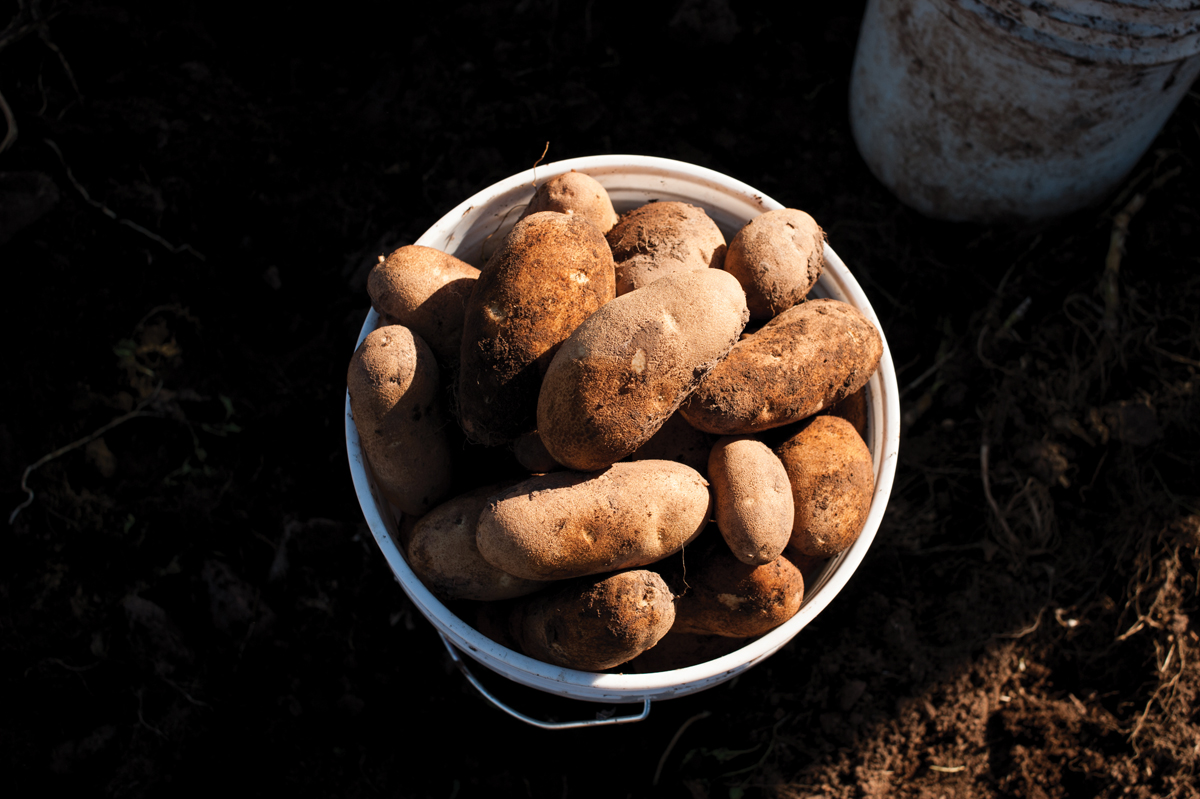 Woody Creek Distillers grows two varieties of potatoes—the rare Stobrawas and these, the Rio Grandes, which are indigenous to the Roaring Fork Valley. Before the distillery planted Stobrawas, they were only grown in the Eastern Hemisphere.

Only the most dedicated make potato vodka. It’s a pricey (roughly $1,200 per batch, versus $170 for corn-generated spirit) and volatile process because the distiller is dealing with a fresh vegetable that begins to deteriorate the moment it’s pulled from the earth. But the payoff is big, with creamy, clean notes that lend themselves to sipping. “Everyone would make vodka with potatoes if it were as simple and straightforward as using grain,” Kleckner says. 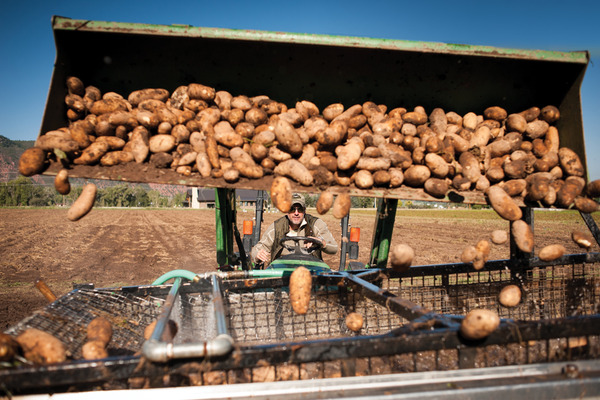 Co-owner Patrick Scanlan dumps a load of Rio Grandes into the specially designed “potato Jacuzzi” for a rinse. 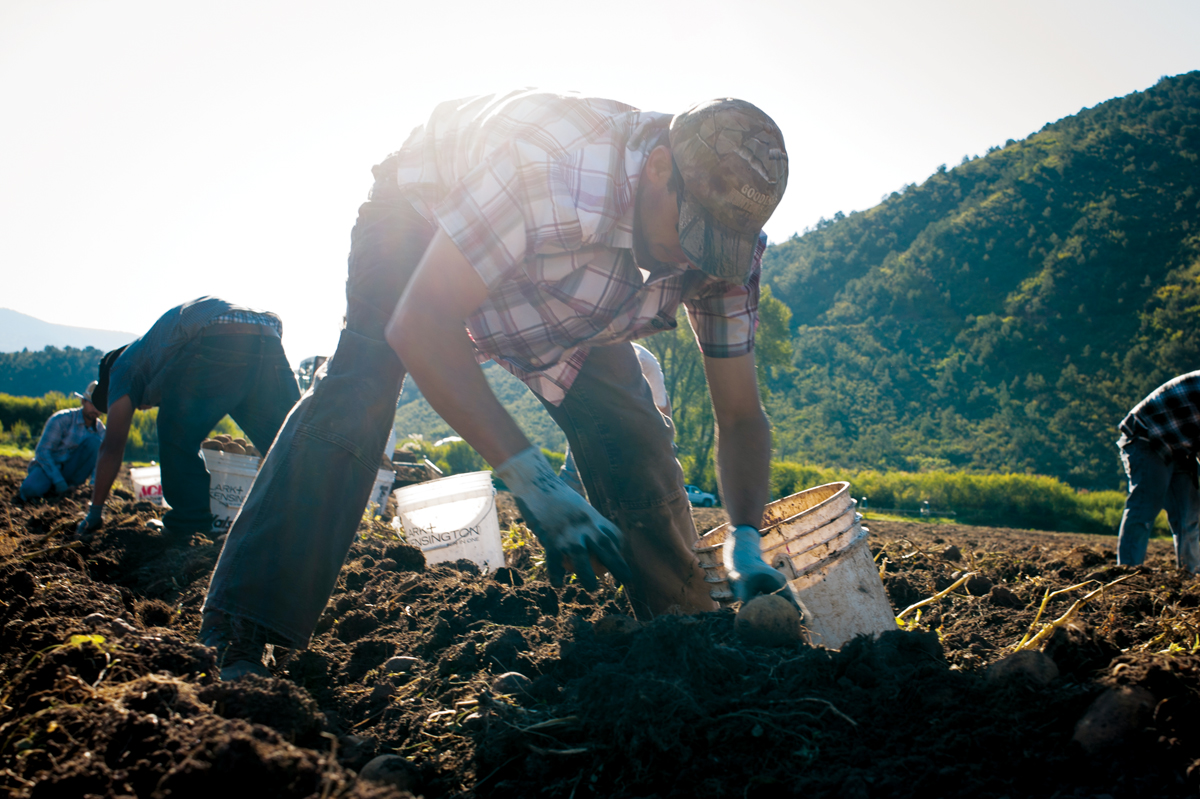 The majority of the world’s vodka is made with grain alcohol, and some distillers even use neutral grain spirit (NGS), an industrial-grade ethanol  that’s produced in refineries. That tasteless, odorless, pure alcohol base is delivered to distilleries by tanker trucks, cut with water, and turned into vodka, gin, and whiskey. Even many bottles stamped “Made in Colorado” originate as NGS, which is made with grain from who knows where. “It’s nasty stuff,” Scanlan says. “If something has to be distilled as many as eight times, it’s because it’s garbage.”

It was Chopin, a high-end, creamy-tasting potato vodka from Poland, that Scanlan and Kleckner used as their muse when dreaming up the business. They would grow their own potatoes, mash them, distill them, and bottle the spirit. And they would sell it at premium prices. But before they could make vodka, they had to track down the potatoes. 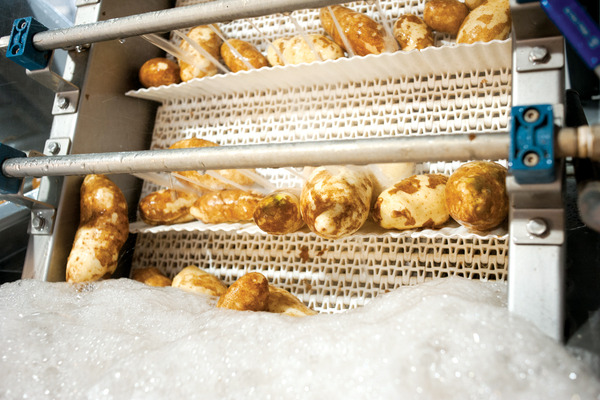 After making the eight-mile journey from farm to distillery, the potatoes are washed, scrubbed, and 80 percent peeled. Leaving some of the peel on the vegetable imparts natural yeast and nutrients into the mash. 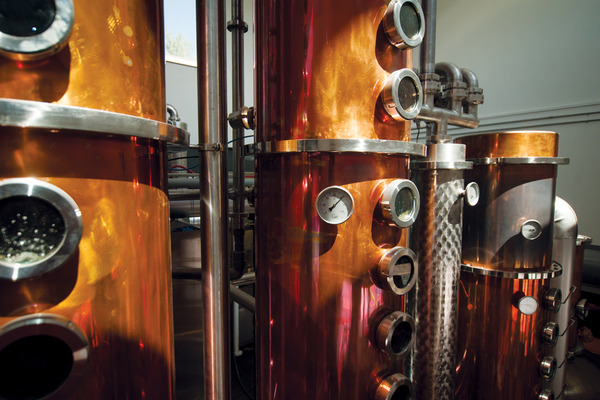 Chopin makes its prize-winning vodka with Stobrawas, a variety of Polish potato with high starch content. These tubers are grown almost exclusively for vodka-making—and Scanlan and Kleckner discovered the varietal only existed in the Eastern Hemisphere. Eventually, they imported a culture and sent it to Colorado State University for testing and propagation. CSU was successful, and Woody Creek Distillers’ first Stobrawas went into the ground in May 2012, six years after Scanlan dreamed up the seed-to-bottle operation. 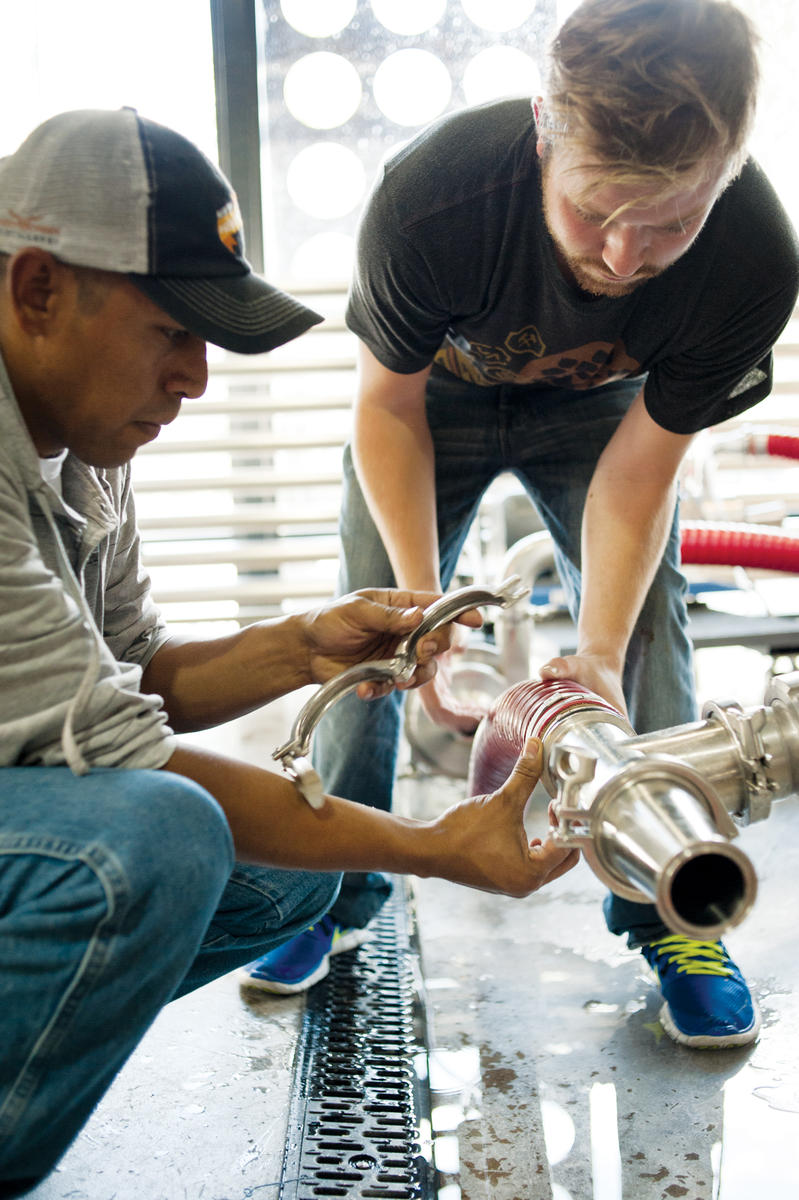 The 130-acre Scanlan Family Farm sits up the hill from the Woody Creek Tavern. Scanlan and I wind past meadows and horse ranches before pulling into the driveway. A half-dozen yellow labs, terriers, and staghounds (“I used to breed them, but I’m getting out of it,” Scanlan says) chase the car as we pass the house and come to a stop just above the Stobrawas. Potato fields aren’t neat and tidy; instead, they’re colonized by rows of mounded dirt with floppy, basil-like leaves coming up through the middle. These plants might not be conventionally pretty, but their surroundings are bucolic: aspen tree–covered hillsides, copper-leaved scrub oak, and snowcapped fourteeners rest in the distance. The town of Aspen lies just out of view. “Mighty expensive real estate my potatoes are growing on,” Scanlan says. 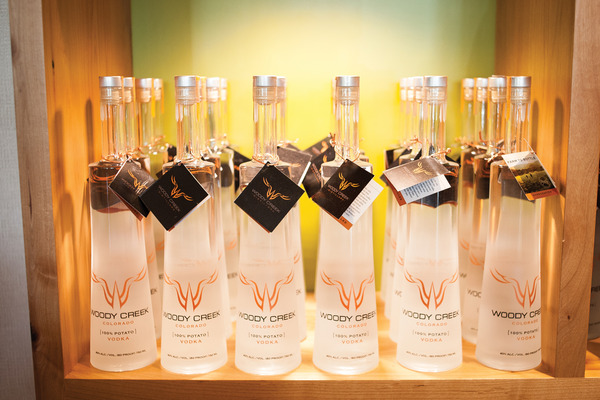 As we walk back to the truck, Scanlan explains how the roughly 40,000 pounds of Stobrawas in this field will go on to become the distillery’s reserve vodka, a bottle of which retails for $120. We drive down the hill to a larger plot where Scanlan’s men are digging Rio Grandes for the distillery’s signature vodka ($35 a bottle). It’s a scene that harks back to the late 1800s, when, according to Scanlan, Colorado produced more potatoes—many of them Rio Grandes—than the state of Idaho. But when the silver industry dried up in the early 1950s, the trains stopped running and the potato market disappeared overnight.

Now, from early September to late October, Scanlan’s crew pulls about 24,000 pounds of Rio Grandes from the dirt each day. Workers sort the large tubers in the field, keeping the good and setting the bad aside. “Most operations use seconds; they just throw them in together,” Scanlan says. “It affects quality. It’s like eating a hamburger versus a filet.” The chosen potatoes are washed in the “potato Jacuzzi,” which Scanlan engineered, and inspected once more. Then the russets are loaded into the back of a pickup and trucked to the distillery eight miles down the road. Scanlan and I climb back into his Land Rover to make the same journey.

It took Scanlan and Kleckner eight months to renovate an old furniture store into a distillery. The most dramatic change was punching through the roof to allow for the stills’ tall copper columns, which are critical to vodka-making. Set behind ceiling-to-floor glass at the entrance, the view of the gleaming German-built copper towers and stainless steel equipment indicates transparency. 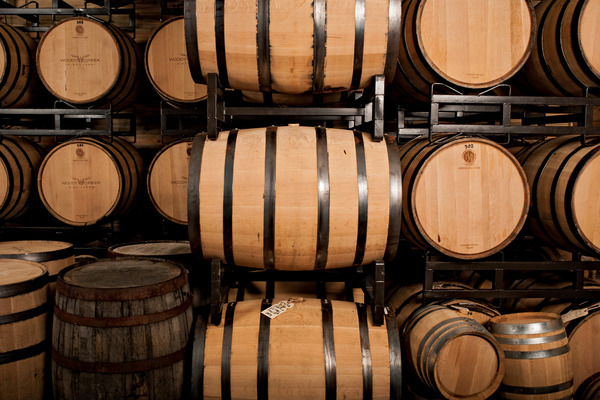 Through the windows I can watch as truckloads of just-dug potatoes are weighed, scrubbed, peeled, and turned into mash that’s ready to ferment. The resulting alcohol is separated and vaporized. What’s left is high-proof vodka, but Scanlan and Kleckner go one step further to ensure purity: They keep only the “heart,” discarding the first and last bits of every batch. With the addition of cool Rocky Mountain spring water, the vodka is finished. The entire process from field to bottle takes five days and only one distillation. 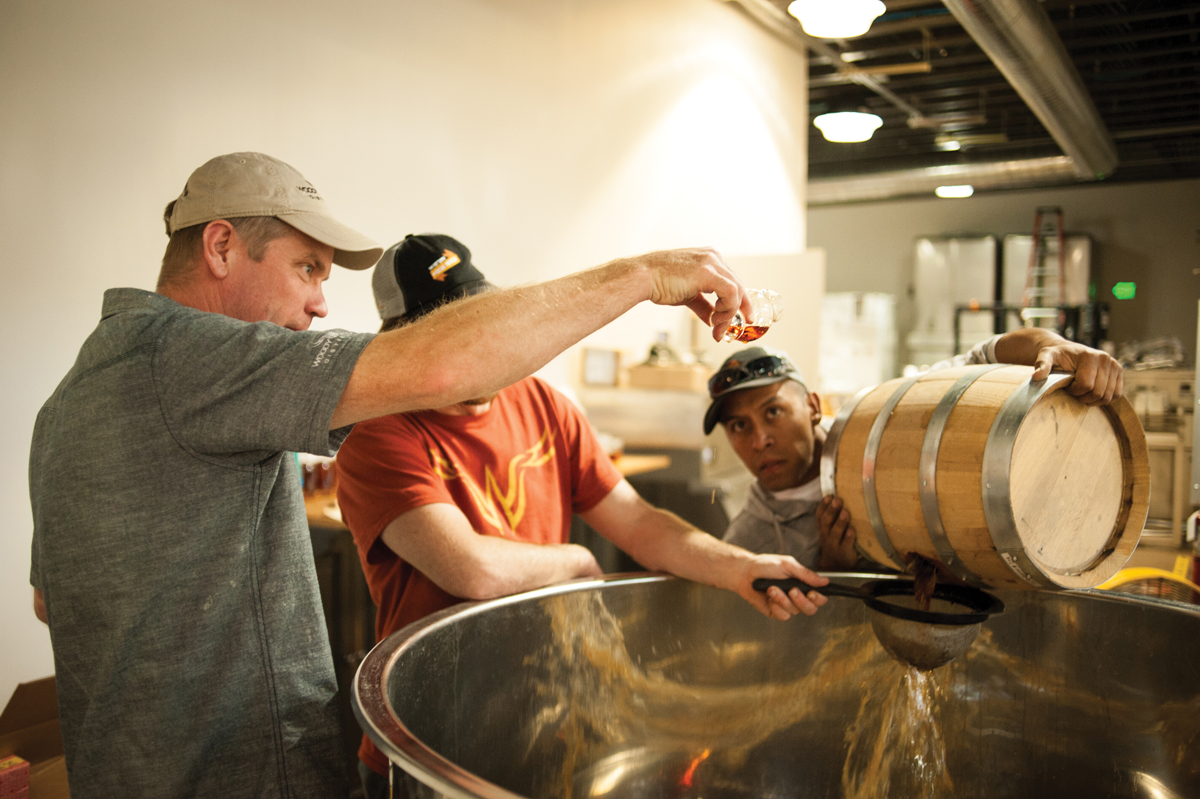 Distillery manager David Matthews (left) checks on the aging flavor of the whiskey. The five-gallon barrels provide an inside look at (and taste of) what’s going on in the bigger containers.

It takes 12,000 pounds of potatoes to make a batch that yields 1,000 bottles. And since the farm-grown Rio Grandes and Stobrawas are limited resources, Kleckner says, “when we’re done harvesting potatoes, we’re done making vodka.” The fresh-potato paradigm is paying off. In March, Woody Creek won awards at the annual San Francisco World Spirits Competition: a double gold designation and best in show. “This is the big one—it’s like winning an Emmy,” Scanlan says. 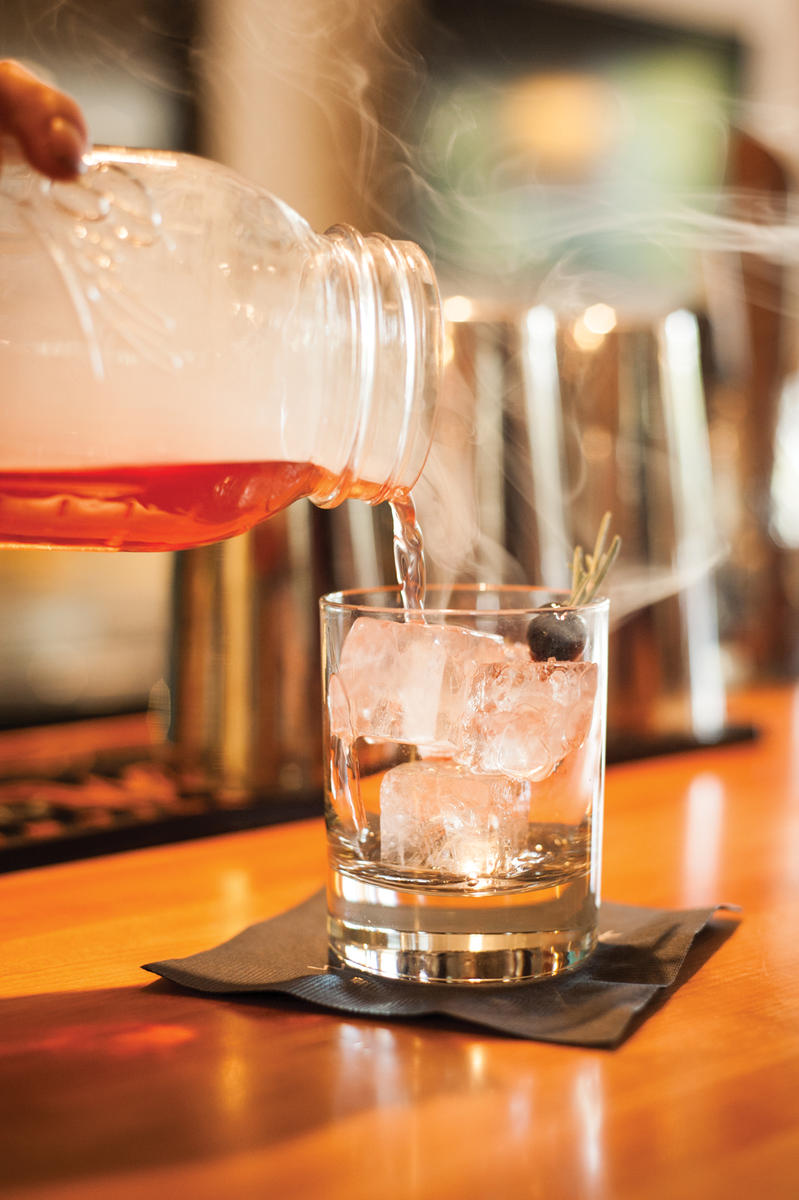 Once the very last potato has been turned into vodka, Scanlan and Kleckner begin making rye whiskey from corn raised near Grand Junction and rye farmed in Yuma—as well as bourbon, pear eau de vie, and oak-aged apple brandy. The bourbon and brandy are still in barrels, and last year’s production of eau de vie was so small it wasn’t distributed, but still, Woody Creek’s reputation precedes it: Southern Wine & Spirits, the nation’s largest liquor distributor, bought the first 500 cases of whiskey before the booze was even out of the barrel.

The three-year-old distillery is humming along. It’s an anomaly, but for the two electrical engineers who set out to make the world’s best potato vodka, success is less of a surprise and more of a validation. “We treat vodka like a vintage product,” Kleckner says. Indeed, like a fine wine, the smooth, almost vanillalike flavors in each sip of Woody Creek’s vodka taste of the land, and of determination.