April 29 — I’m testifying today. I slept just a few hours. Several friends and family are going to be in the courtroom and overflow room. It’s reassuring, yet I’m nervous. On the drive to the courthouse, I try to take my mind off the day ahead with music but can’t settle on anything. I find myself jumping from Prince to Southeast Singers to Zac Brown Band to the Allman Brothers—not even listening to whole songs.

We arrive to find a crowd of reporters. Today I give a firm “no” when asked to speak. My focus is on getting inside and settled. Once past security, I see so many familiar faces; friends give me hugs. Megan, Mitchell, and I walk into the overflow room. My in-laws, the Sharps, and Megan’s sister sit with us. I am so appreciative that they came from Longmont and Berthoud to support me. Dad has always been my biblical mentor. Mom keeps me accountable. Melissa, my sister-in-law, tries to keep the mood light; she chats with my wife to keep her spirits up.

It has taken awhile for me to come to terms with it all, to stop simply going through the motions. This case has brought out the best and worst in me. I remember there were times when I did not have much to say to my family. My anxiety and PTSD were too overwhelming. I even missed a family trip to Israel. But they loved me through it all, and I am so grateful.

We sit and listen to the morning testimony. It is often gruesome and painful to hear, but it’s what happened. I continue to talk to my group; I want to make sure to greet everyone who’s taken time out of their days to support me.

A man taps me on the shoulder. I turn around. He asks to have a few words with me in the back hallway. It’s my friend Rebecca Wingo’s father who traveled from California for the trial. He tells me he doesn’t not hold any ill feelings or grudges. I had not spoken to him since July 20, 2012, when I had to tell him about the last time I saw his daughter. We talk about her girls and how things are going. What could have been a very difficult conversation was made easier because of his sincerity and genuineness. This tragedy was life-changing for both of us, but so much more so for him and his family. We hug and exchange information. I will never forget that.

A court staffer tells me I have too many people on my list to go into the actual courtroom. I narrow it down (the rest will stay in the overflow and watch via closed-circuit television). And then what I had been dreading and anticipating for months: my time to be part of the “The Aurora Trial.” My group takes the elevator together (turns out everyone on my longer list is able to make it in). We are searched again as security more thoroughly rifles through the contents of our bags, and then we are ushered into our seats in the right set of benches. On my left is Kaylan Bailey, who testified the day before and showed me how easy it was; she inspires me. On my right is my wife and then my son, Mitchell—the two people who have been at ground zero since almost the beginning of this circus. As I sit and wait for my name to be called, I clench Megan’s hand and say, “I can do this.” She smiles and responds, “I know.”

Being a wife can be difficult under normal circumstances. Megan is an angel. She came into my life at a harrowing time, but she sat and listened to my groans, pains, and memories without complaint. At times, she carried me through the storm and onto dry land. She attended court dates and the theater reopening; she listened to speech after speech of mine; she sat through late-night talks when I needed her; and she has become my protector. When we met by chance at the Squire Lounge September 2012, I wasn’t expecting—or looking—for anyone to be involved with. It was the first time since the shooting that I had gone out of the house simply to do something fun. Then Megan came along, a friend who became the love of my life. And now, on this critical day, here she was holding my hand. 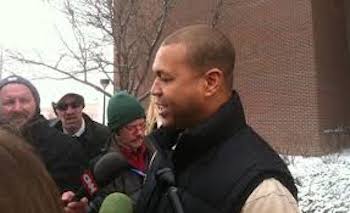 Can the people call the next witness? Yes, your honor. Marcus Weaver. It’s time. I’m ready. Time seemed to slow down as I made my way to the stand. For some reason I felt the need to look at the shooter face-to-face, not the side view I’d always had. I wanted to look him in the eyes and see if there was any light, remorse, or pain. I made eye contact, and I saw nothing but an empty look back and what appeared to me to be a smirk.

I turned to take my oath. I methodically told the story of the events of July 19 and 20, one I have told thousands of times and will never forget. Whatever prosecutor Lisa Teesch-Maguire asked, I answered. At one point, I held a microphone while I depicted, with my arms, the shooter’s motions with the AR-15. Then I used a pointer to show the jury how I entered the theater, where I sat, and the path I took to escape. I began to feel more at ease. It helped to have familiar faces to look at. Both sides had several meetings with the judge, and the jury had questions once the prosecution rested (the defense did not cross-examine). I had to leave courtroom for the judge to discuss the questions with the attorneys, and then a break was called. My anxiety rose. I started thinking about the 12 people who died. Tears welled up. I excused myself to the bathroom.

When I came out, the court was back from break. I walked in to handle the jury’s questions. It felt like they asked more than the attorneys. I just wanted to answer them and leave. Finally, my subpoena was released and a weight was lifted. Relief washed over me. I talked to one reporter about the experience but that was it. I wanted to be with my friends and family and start my next journey. Unless called by defense, I am done. The end was finally here. The community the shooter tried to tear apart had put me back together again.

June 3 — As usual I am up early, journaling out of habit—writing and thinking about where I was before and during the trial, and where I am now. My phone still rings, but I don’t want to do anymore interviews. I’m finished. Speaking engagements have increased, but it is edifying to share your life—not just the theater—with middle, high school, and college kids. 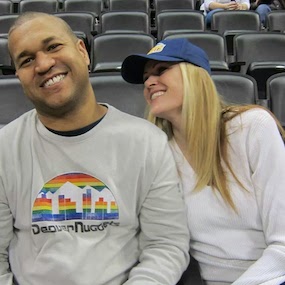 My experiences over the past few years have changed me forever. I had to adjust—and I will have to continue adjusting. Life was difficult already, but being a survivor of that night launched me into an area I never expected. I have been called many names, good and bad (hero, inspiration, media hound, believer, atheist, hoax crisis actor, you name it). But they can never say I wasn’t willing and thankful. I was not afraid of the challenges. I still have a ways to go in my recovery, I stood—and stand—strong. I tried to handle being forced into this situation with grace, mercy, and forgiveness. I clung to those who encouraged and supported me through it. I was willing to tell my story. I was willing to seek treatment. I was to break through the silence and expose my true feelings to my wife. Though I wouldn’t wish this situation on anyone, I’ve learned to be thankful for all of it—to be able to tell a story not just about obstacles but about what happens when we are broken or don’t forgive. Maybe, in some small way, I can help save our society from another Sandy Hook, Virginia Tech, or Aurora. I’m thankful the Lord spared my life. The sun is shining on the other side.

My hope in the beginning was always to be there for the others, the community, and stand strong, not serve as a poster child for the suffering and meanderings of this lengthy trial. The faith in me always thinks people can change no matter what, but we all know right from wrong. Was the shooter hurt or unrepentant for something that caused him to do what he did to an unarmed crowd? I don’t know. But he is guilty.

Will I ever feel normal in public places? Probably not. Will the long nights and nightmares go away? Probably not, though I hope they diminish with time. I am here for a reason. Every day is a new beginning, another chance for my fears to start to melt away. I will have challenges, but I can choose not to live in misery over the decision of a coward in theater 9 one early morning. I aim to continue to live a life worthy of my calling.