If your life is defined by the paleo diet (gluten- and grain-free, heavy on lean meats, fruits and veggies, and healthy fats), then you’re likely already familiar with Golden native Juli Bauer. The 27-year-old is the smart, plucky voice behind paleomg.com, a recipe, fitness, and fashion blog that has nabbed Bauer three cookbook deals since its 2012 launch. Even if you’re a newbie, Bauer’s latest effort, Juli Bauer’s Paleo Cookbook: Over 100 Gluten-Free Recipes to Help You Shine from Within, due out this month from Victory Belt Publishing, is destined to bring you into the fold. We recently sat down with Bauer to get the inside scoop.

5280: How did your interest in the paleo diet begin?

Juli Bauer: In 2009, my junior year of college at Colorado State University, my diet was complete crap, so I started on the Zone diet. There was no way I’d stop eating bread or yogurt! It was months and months of me taking one piece of bread off my sandwich before I fully switched to paleo. Then I lost probably 30 pounds.

How did you start making up your own recipes?

I don’t like following rules or instructions, and I thought I could do better than some of the paleo recipes I was reading. I don’t have any culinary training, but in my junior year of college, I just started simple: things like honey-mustard chicken, sweet-potato fries, and muffins. I’d just add stuff until I thought the texture was about right.

So can you make anything paleo now?

No. Mac and cheese just isn’t ever going to happen. Sorry. 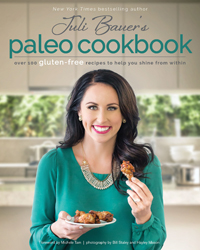 How did your blog come about, and how did you find an audience?

I was working at a CrossFit gym and was always bringing in dishes for people to try, so the owner asked me to start a nutrition blog for the gym with post-workout recipes. When I moved to a different gym, I still wanted to share recipes and what I’d learned about paleo, so I just started blogging…. [I] started Facebook and Twitter pages, and my friends began to send my recipes to their friends. It grew from there, and it got easier to find me on Google when people searched for paleo recipes.

Someone told me she and her spouse lost a combined total of 150 pounds using my recipes. Another said she was diagnosed with cancer and that my blog gave her laughter during her really hard days.

How is this cookbook different from your first two?

This one shows a lot more of my personality. And my recipes have gotten better and better, so this cookbook is really about finding the paleo that works for you. I know it’s hard to change a habit you’ve had for 30 years.

What kinds of recipes will we see?

Place an oven rack in the top position and preheat the oven to 400°. Line a baking sheet with foil and place a wire rack on top. Place wings on wire rack and season. Bake 50 minutes or until crispy.

While the wings are cooking, heat 2 tablespoons of coconut oil in a large saucepan over medium heat. Add the garlic and ginger and cook for about 2 minutes, until the garlic is fragrant. Decrease the heat to medium-low and add coconut aminos, honey, chile sauce, sesame oil, and fish sauce. Bring to a slow boil, reduce heat, and let sauce reduce by 1/3, whisking a couple of times. Once the sauce has reduced and coats the back of a spoon, pour into a large mixing bowl.

In a small sauté pan over medium heat, toast the cashews until browned, tossing them for less than 10 minutes to keep them from burning.

Add the crispy wings to the mixing bowl with the sauce and toss to coat. Place the wings on a large plate and pour any remaining sauce over the wings. Sprinkle with the sesame seeds, then garnish with the toasted cashews and sliced scallion.