The Draw: Charcuterie, locally sourced cocktails, a deft mix of meat and vegetable cookery, and a winning lunch.

The Drawback: Inconsistency: Meals rarely shine throughout every course.

At some point in the past century, American hotel restaurants lost much of the glamour they had once delivered to fashionable diners. Think of the grand ballrooms, dine-and-dance clubs, and glittery society dinners of the golden age of hotels. But by the 1980s, many hotel restaurants were run by anonymous executive chefs who were rewarded for managing costs in formulaic food-service programs that included rubber-chicken banquet catering, overpriced room service, and whatever middling fare was offered in the dining room. There were exceptions—Daniel Boulud got his New York start at the Westbury in 1982—but most hotels were simply not cool places to eat.

That changed when a new breed of American hoteliers woke up to the appetites of sophisticated travelers and local diners. A hotel restaurant could be a scene, a draw, part of the city’s power and food heat map. In the late ’80s, Ian Schrager made 44 in New York’s Royalton Hotel a red-hot spot: Geoffrey Zakarian, who went on to make a splash at the Delano Hotel in Miami, was the chef. From the West Coast, Bill Kimpton grew a chain of hotels by working food and wine into his boutique formula. Wolfgang Puck’s Postrio opened right next door to Kimpton’s Prescott Hotel in San Francisco and functioned as its restaurant (just as Panzano, owned by Kimpton Hotels & Restaurant Group, is attached to the Hotel Monaco in Denver). I remember a magical late dinner at Postrio after a transcontinental flight: just me, unwinding over a half-bottle of Albert Boxler Riesling and some duck, followed by a short walk to the elevator and bed. That’s hotel life as it should be.

Today, the presence of a trendy restaurant in an interesting hotel is one sign of downtown vitality. My favorite example right now is Nico Osteria in Chicago’s stylish Thompson hotel. My wife and I stayed there on a road trip last fall, and we ended up eating a breakfast, a lunch, and a dinner there. Every meal was excellent. The breakfast kouign-amann pastry—like a croissant made dense with sugar and even more butter—and a bowl of oatmeal blended with farro and steeped plums were worth the stay alone.

Locally, the Hotel Teatro recognized the draw of a destination restaurant and opened Restaurant Kevin Taylor in 1999, a white-tablecloth French fine-dining establishment that won plenty of nods from Wine Spectator and Food & Wine. But fine dining was given the boot by the casual urban foodie trend, and the restaurant was replaced last summer by the Nickel, which occupies a corner space in the hotel’s entirely redesigned main floor.

The restaurant is dominated by a handsome three-sided bar at its center, with tables running down two walls with monumental windows. You feel the bones of the solid 1911 structure around you—the building was originally a Denver Tramway headquarters—although the decor itself settles not quite comfortably between classic, modern, and odd.

This is a full-service kitchen. Executive chef Chris Thompson—brought in last year from San Francisco, where he held the same title at the celebrated Italian restaurant A16—runs the hotel’s breakfast, lunch, dinner, catering, room service, and bar. I decided to put the joint through most of its paces. I even stayed at the Teatro one night; the corner king rooms, I can report, are gorgeous, and service is terrific. 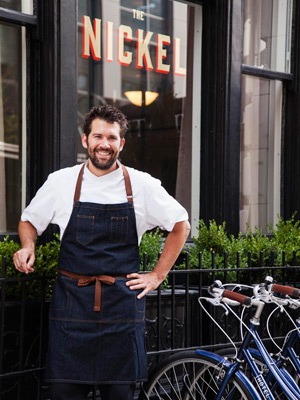 Thompson, a California native, is a charcuterie wizard and whole-animal butcher, and at the Nickel you’re offered a checklist and a pen to pick your hams and sausages, cheeses, pickles, and “goodies” such as Marcona almonds and local honeycomb. This is the way to start a dinner, along with a drink from the cocktail list, which draws heavily on Colorado spirits and favors classic formulations and some in-house barrel-aging of cocktails. (The properly aspirin-bitter Nickel Negroni, made with Jackelope gin, comes with its own mini-decanter in a little wooden crate; the Seven Nickel is a lovely, tart, tall take on the sparkling French 75, bejeweled by a macerated cherry.)

What is perhaps more impressive in Thompson’s charcuterie selections are potted things. The halibut rillettes, which taste like a whitefish salad of the gods, rival any of the rillettes I had in Tours, France (Tours being a center of rillettes tradition). Thompson’s version is topped by an avocado cream. I also loved the world’s smoothest chicken liver mousse, served with a bourbon jelly cap. Scoop these delights onto little toasts, then taste the perfectly pickled carrots; the chewy, tangy Bing cherry mostarda; and a little heap of slippery, mild mustard seeds for the ham. Meat choices include chorizo seco, Neapolitan soppressata, prosciutto, and Ibérico ham. Cheese selections are local, national, and international.

The rest of Thompson’s dinner menu, dotted with Colorado ingredients, features hearty, stylish American cookery with Euro-Mediterranean tendencies. If that sounds complicated, there’s almost nothing that doesn’t sound good or make sense in the menu descriptions. And plenty tastes good, too. The problem is a nagging number of misfires.

But let’s start with the good. A massive grilled Duroc pork chop—charred outside and pink but not rare within—was a masterpiece ringed with a collar of fat. It was topped by a sweet onion marmalade that could have used more caramelization, but man, that glorious piece of meat will be long remembered. Rotisserie chicken was expertly cooked, with a gentle, smoky spice-market flavor from a dusting of harissa. The braised pork sugo on a bowl of cavatelli had exactly the slow-food richness you’ll find in a good osteria in Bologna, Italy, though the noodles were a bit pasty. Seasonal vegetables, simply prepared, accompany many of the mains and are featured in a lot of appetizers as well; the menu is nicely balanced between plant and animal.

I was lured back to the Nickel for a solo lunch by the promise of a porchetta sandwich that’s not available at night. By solo I mean me, alone, at the big square bar, chatting with the exceedingly friendly bartender, staring at 14 local-beer taps and wondering where the crowd was. A spicy jar of giardiniera—carrots, cauliflower, jalapeño, and celery—reaffirmed Thompson’s pickling mastery and was followed by the massive pork sandwich. The meat was actually chopped roasted pork belly, but who’s complaining? It came with a lemony aïoli and arugula on a soft ciabatta roll. It was as good a lunch as I’ve had in this town.

For all that, after two dinners my dining companions and I had several complaints. A rack of Colorado lamb arrived practically raw. When my brother-in-law politely requested a bit more fire time, the waiter noted the chef almost always undercooks it. An Emma Farms Cattle Company wagyu coulotte steak probably should have been culled from the herd; although coulotte is a sirloin cut, it needed more marbling and tenderness for $34. A vegetarian plate of farro—with delicious roasted baby carrots, Marcona almonds, mint, and lemon oil—was oversweetened by an excess of dates. The peas on an English pea bruschetta tasted like they had been brought from Southampton, England, by steamer and mule team: dry, tough, not worthy of being served. A few weeks later, similar peas arrived on an appetizer of otherwise tasty crispy pork belly. Why not tender favas, which were in season? Butter-poached halibut, which promised to do an exciting little boogie with Castelvetrano olives and preserved lemon, was tripped up by a puzzling saffron-vanilla emulsion. 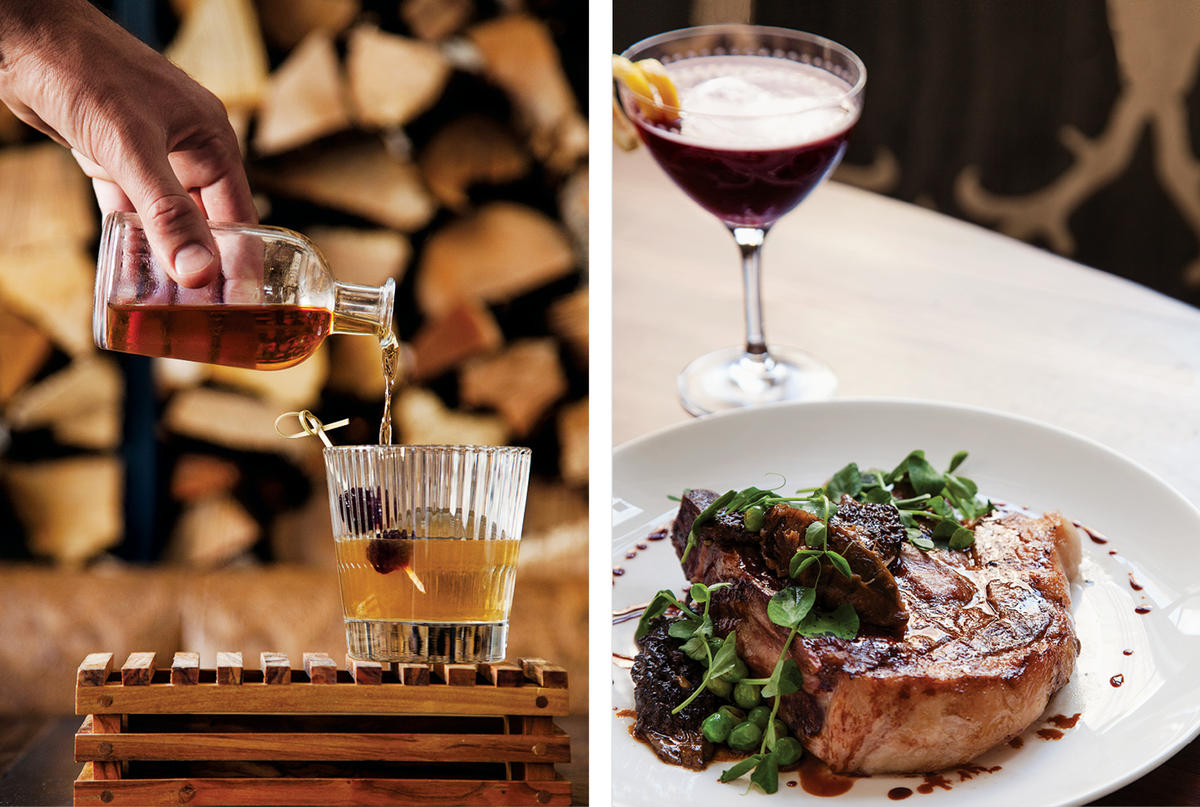 But enough of the complaints. I must praise the Nickel’s amazing monkey bread, served with caramel sauce in a little cast-iron pot for dessert. I grew up worshipping Sara Lee pecan coffee cake, convinced as a child that it was a genuine baking miracle. As an adult, I’m convinced it’s a remarkable bit of food processing: cinnamony, buttery, delicate. The Nickel’s monkey bread, minus the pecans, gives Sara Lee the wings of an angel—admittedly my second reference to the divine in this review, but it shows the Nickel’s potential.

For breakfast, I eschewed room service in favor of the Study, a librarylike space that sits beside the restaurant. This is where breakfast is served until the Nickel opens for weekend brunch or weekday lunch. The promising menu includes a pastrami hash and a breakfast sandwich with bacon jam. But an egg-white omelet with braised greens, mushrooms, and goat cheese was strangely low on fillings and flavor. Toast, substituted for potatoes, arrived half-toasted in the hands of an indifferent waiter. Being an oats fanatic, I ordered the steel-cut oatmeal because it came with something called “strawberry milk”—but there was about a tablespoon of said milk, and it was rather less interesting than strawberry Nesquik.

The Teatro gets the new hotel-restaurant formula. The big bar, the charcuterie station and open kitchen, old-timey typography: In no way does this feel hotel-generic. I like the ambitions of the Nickel a lot, and I like some of what it delivers. Yet I didn’t love it, and those dinners for four were in the $300 range. The unevenness may explain the half-empty room on both nights. I resist the temptation to say this nickel needs a bit of polishing—or, I guess I don’t, because it does, and I just said it.

Correction: The print version of this review included a total of five stars; it should have included four. We regret the error.