You may not recognize Courtney Hoffman’s name, but you’ve likely seen her work. The costume designer has developed quite the resume at just 30 years old: She’s worked (sometimes as a trainee) on Snow White and the Huntsman, Water for Elephants, and Django Unchained. Most recently, she wrapped another Quentin Tarantino flick, The Hateful 8, which opens on Christmas Day. The film was shot primarily at Telluride’s Schmid Ranch. We spoke with Hoffman—as she scoured a costume rental house in L.A. for wetsuits and swim trunks for a commercial starring Owen Wilson—about Westerns, filming in Colorado, and working with the legendary Tarantino. Some highlights: 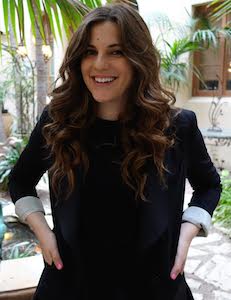 “I absolutely love Westerns. My favorite thing about them is how it’s a sort of set environment, but it’s ever changing based on the period in which it was made. When you watch ’60s Westerns, they feel like the ’60s. The Hateful 8 is an amazing reflection of the racial turmoil in America now. I don’t know that Quentin even intentionally did that, but there are speeches Samuel L. Jackson’s character gives that you could say right now and they would still feel relevant. It’s a really present genre.”

“We were shooting in Telluride, but my poor supervisor was in Montrose every week. We were constantly running around to stores to buy more gloves and extra socks.”

“Everyone was so scared about being cold that we had added high-tech, wind-resistant fabric in between the layers of some clothes. We went out of the way to make sure [the cast was] going to be totally warm. Then we got here, and it was such a mild winter that they almost were too warm in their costumes at times.”

“The goal of any Quentin Tarantino movie is to make sure the overall look is Quentin Tarantino-y. He has his own aesthetic. In Westerns, there are these iconic cast characters: The rich person. The bad guy. The Mexican. The hero. The Confederate. The Yankee. Kurt [Russell] is the bounty hunter. We wanted him to take over the screen, so we gave him this giant coat that’s impressive and menacing on its own.”

You’ll have to wait for an upcoming issue of 5280 to learn more behind-the-scenes secrets from the Colorado set. If you just can’t wait, check out the Designing the Modern Western panel on Saturday, August 15. Hateful 8 set decorator Rosemary Brandenburg will join Hoffman for the 4:30 p.m. event at the Sie FilmCenter (tickets are $15 to $20). They’ll discuss their creative take on contemporary Westerns, as well as what cowboy classics inspired their visions for the Tarantino film.

Want More Westerns? The panel is part of Denver Film Society’s Westerns: The Golden Years program, which includes nine film screenings between Thursday, August 13, and Sunday, August 16. Check out the lineup and buy tickets (or a series pass) here.