However bad bullying might be for most kids, it’s considerably worse for children with disabilities, who are often simply ignored or overlooked by their peers—a particularly hurtful brand of neglect.

Sammy Loewi experienced this firsthand. Born with muscular dystrophy, she lived her entire, brief life in a wheelchair. In high school, Sammy felt so invisible to her peers that her teachers became the closest thing she had to friends. The isolation was especially hard to take because Sammy—who insisted on speaking up and speaking out for anyone she felt was being treated unfairly—had previously found tremendous support from her elementary school classmates and teachers at Denver’s Graland Country Day School.

At Graland, Sammy inspired the school to turn a one-day Special Olympics event into a yearlong buddy program that paired abled kids with a disabled friend. They’d do monthly activities such as picnics or bowling parties, and by the end of the program’s first year, about 500 people packed Graland’s gym to see Sammy and others speak. The school has since made the program a part of its permanent curriculum, and thus, of its culture. 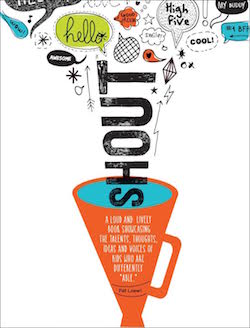 Sammy died when she was 21 from complications related to her illness. Now, inspired by her late daughter’s fearless personality, Pat Loewi is making it her own mission to ensure that what happened at Graland becomes part of all kids’ culture. In her new book SHOUT!, Loewi gathers stories, poems, pictures, and artwork from disabled kids to help demonstrate to the more fortunate how much these youngsters have to offer. “[To get started] I interviewed about 90 kids with various conditions, and every one of them said, ‘I wish other kids would just say hello to me,’” she says. “And I’d leave and just sob.”

Loewi is targeting the self-published book at 10- to 18-year-olds, usually as part of a school’s or district’s anti-bullying program; the Adams 14 school district and a local Rotary Club chapter have expressed interest in funding and promoting it. (It’s already received about 600 pre-orders ahead of its mid-October release. For more information about the book and its related programs, visit shouteffect.org.) “Making someone feel invisible or ignored isn’t necessarily malicious, but it’s psychological bullying,” Loewi says. “SHOUT! is Sammy. She was not one to be ignored.”

Editor’s Note 9/29/2015: This article previously stated that Loewi’s long-term goal is to bring SHOUT! to the collegiate level; this is incorrect.