I got bit by the backpacking bug earlier this summer when a friend invited me on a Fourth of July trip up to Conundrum Hot Springs in Aspen, I splurged and bought Osprey’s newest pack, the Aura AG 50, in “rainforest green,” and I was determined to use it before the cooler days of fall rolled in. Three backpacking adventures later, two friends and I embarked on our most daunting trek yet—a late August journey on Four Pass Loop. Tucked away in the Maroon Bells–Snowmass Wilderness, the 28-mile trail traverses over four mountain passes. The 360-degree, knockout views easily made this one of the most rewarding outdoor experiences I’ve had in Colorado. But the 10,000-plus feet of elevation gain (and loss) also made it the most challenging. Add 30 pounds of gear and you’re in for a calf-burning, awe-inspiring hike—and one you’re not likely to forget. 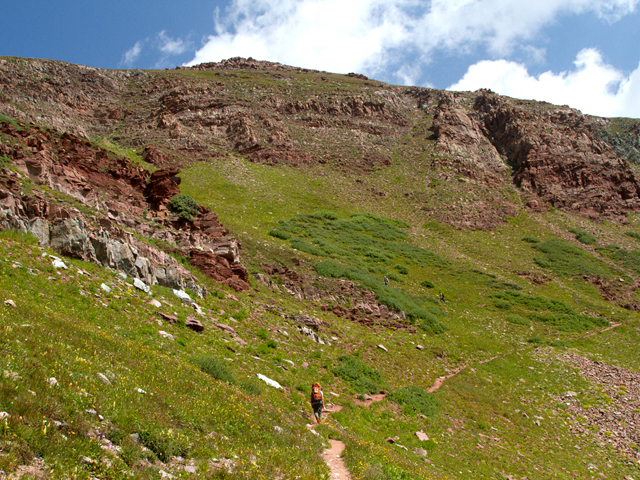 Hiking up to Buckskin Pass

The hike begins at the iconic Maroon Lake and winds up to Crater Lake. Many people opt to do the route clockwise over the course of four days. Challenge accepted: We decided to do it counter-clockwise in three days. The first pass we hit was Buckskin Pass. Steep switchbacks lead up to the trail. 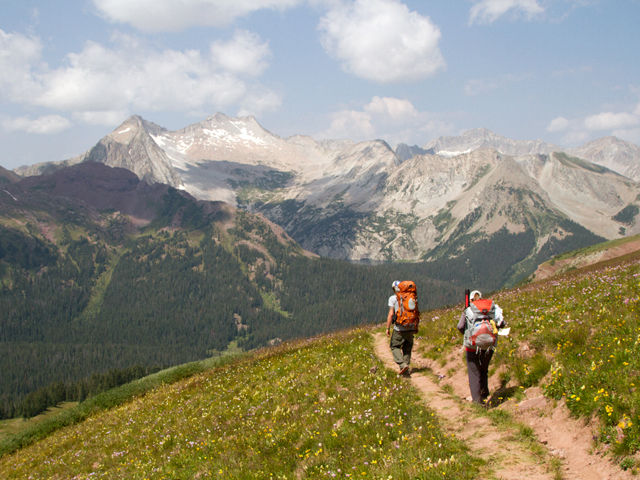 More than 2,000 feet of elevation gain in a little over 4 miles got us up on top of Buckskin Pass. After a quick snack, we descended and set our sights on Snowmass Lake, 4 miles further, and our first night’s campsite. I’d heard the morning light over the lake shouldn’t be missed. 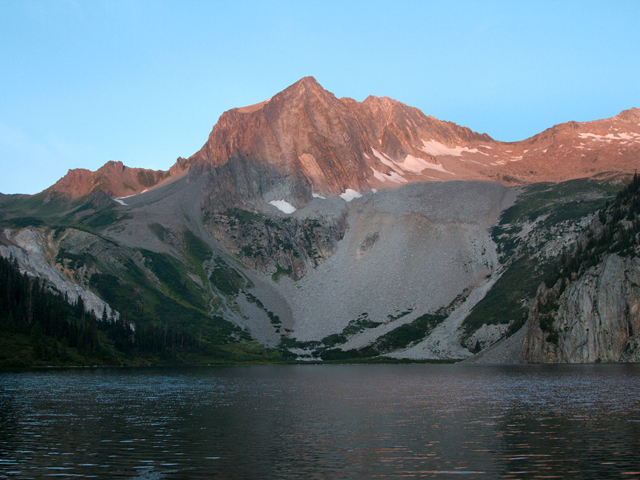 The morning light on Snowmass Lake and Snowmass Peak

I woke early and caught the pink-tipped tops of Snowmass Peak. Our second day was going to be a long one. Because we’d opted for three days, we needed to cover almost 12 miles over the remaining three passes in order to set us up for the final day of hiking out and driving back to Denver. The next pass, Trail Rider, loomed ahead, 2,000 feet up. 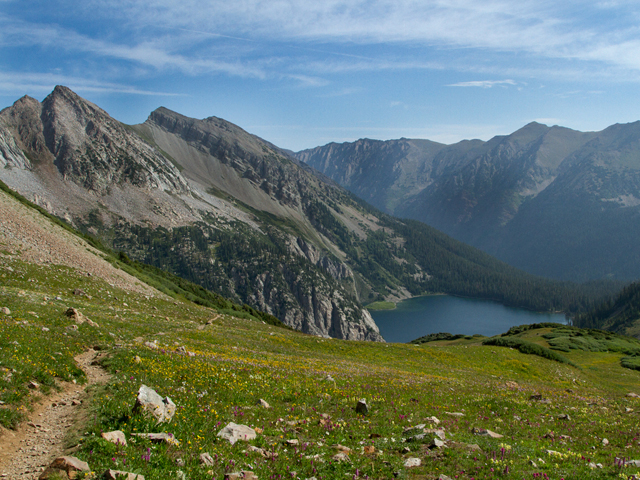 The view of Snowmass Lake, hiking up Trail Rider Pass

As we climbed to Trail Rider Pass, the view of Snowmass Lake, nestled between the mountain ranges, was clear. This was arguably the most spectacular scene of the hike (but that’s very arguable, because the entire hike was gorgeous). 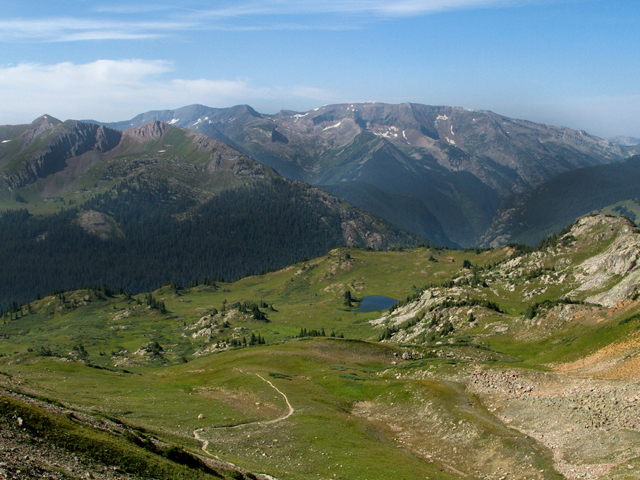 The view from the top of Trail Rider Pass

The view was breathtaking, as were the winds at the top of Trail Rider Pass. We only paused a few minutes, just enough time to snap some pictures. We started the 2,000-foot descent down a rocky series of switchbacks and into a mountain valley. 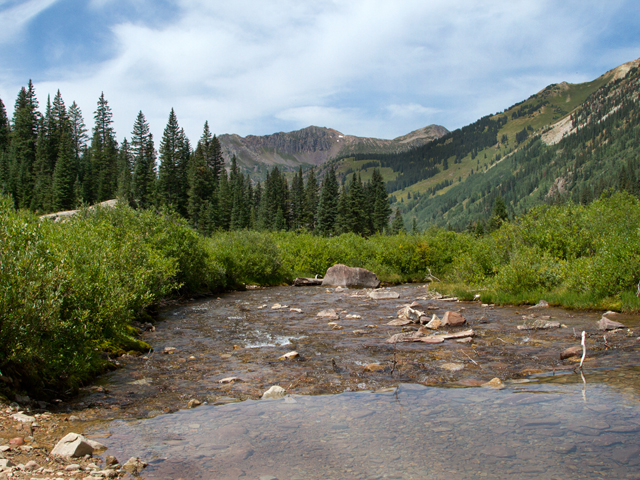 The first (and only) substantial creek crossing came right around mile 14, the supposed halfway point of the loop. We found a shallow point and waded through the mid-calf deep, refreshingly chilly water. Opting not to bring my Chacos along (they’d been deemed unneccesary weight), the rocks were sharp on my bare feet. 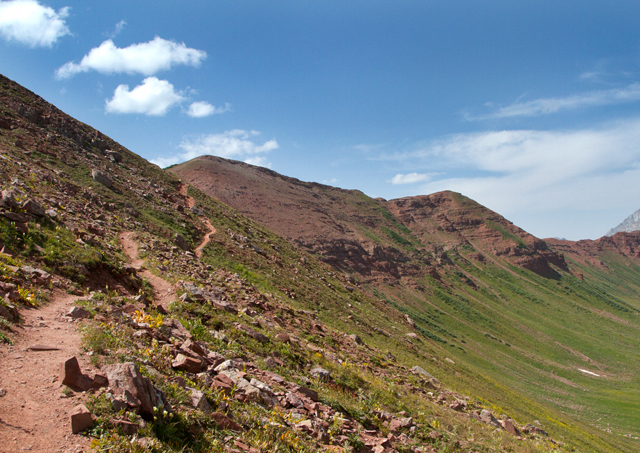 The climb up to Frigid Air Pass

The most exhausting part of the Four Pass Loop is the constant yo-yoing: You can drop or gain 2,000 feet in just a few miles. The climb up to Frigid Air Pass was no exception. We began a steady climb up, which culminated in long, rocky switchbacks. At one point, I was almost on my hands and knees, slowly crouching my way up the steep, rocky grade. 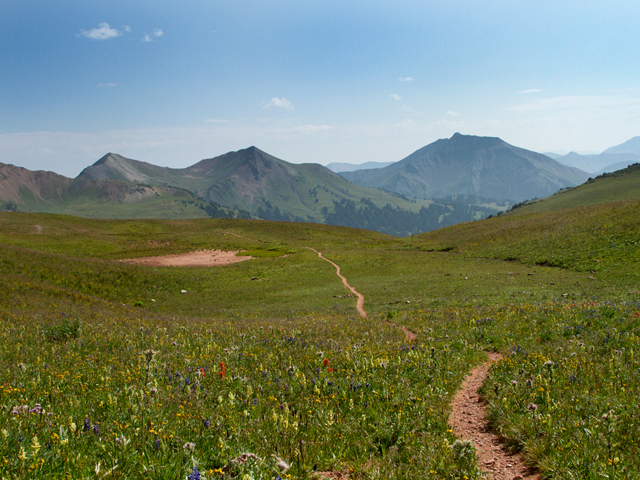 The meadow between Frigid Air Pass and West Maroon Pass

After a rocky, swift descent down Frigid Air (read: me, pack strapped tight and camera swinging around my neck, sliding on my butt down the rocky trail), we traversed through a beautiful meadow of wildflowers. The slightly rolling trail gave us a reprieve before the final pass: West Maroon Pass. After this pass, we planned to camp in the valley and hike the remaining 6 miles the next day. 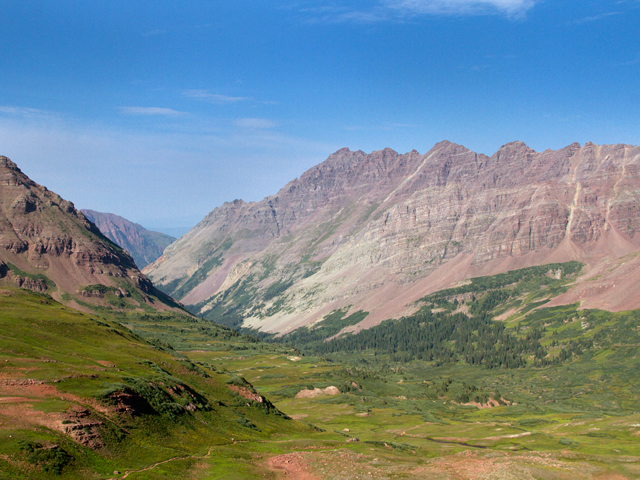 The view from the top of West Maroon Pass

After we conquered West Maroon Pass and enjoyed another beautiful expansive view, I felt a sense of accomplishment. This feeling was different than at the end of other hikes I’ve done. The Four Pass Loop, such an overwhelming hulk of a hike, was now something I’d completed. Sure, it beat me up, blasted my calves, and gave me a wicked farmer’s tan. But ask me, would I do it again? In a heartbeat.