The Draw: Beautifully cooked and presented food in the bustle of one of Union Station’s flagship restaurants

The Drawback: No table service at lunch; fussy desserts

Don’t Miss: Pretty much anything savory

Mercantile dining & provision operates with French precision and American ease—it’s a deft mix of kitchen rigor and New World chillin’. In chef-owner Alex Seidel’s book, unforced friendliness is as important a signifier of quality as achieving a perfect butter-sauce emulsion. High and low dishes are equally respected. Service is attentive but still relaxed.

Danny Meyer (of Union Square Café, Gramercy Tavern, Shake Shack, and other notable restaurants in New York City) sums up this mix of precision and ease with the old-fashioned word “hospitality.” The approach is admired internationally and emulated in places like the Ivy in London. At its best, it delivers Michelin-starred food without the Michelin snoot or sacraments.

Mercantile is a complicated operation, especially when compared to Seidel’s Fruition Restaurant, which opened in 2007 to immediate acclaim. There, the chef proved that his version of refined farm-to-table cooking (the phrase is not overused here—after he launched the restaurant, Seidel bought a farm) could work in the clubby intimacy of a space so small it doesn’t have a sit-down bar. With Mercantile, the restaurant is an elaborate adjunct to the Union Station rebuild that serves complex cocktails and three meals daily while also selling charcuterie, pickles, preserves, and cheese from its in-house market.

To make all this work, Seidel developed a menu of Mediterranean-leaning dishes that rest on French technique, adding comfort notes here and there. Then he marshaled a big squad of young, good-looking waitstaff, bartenders, and cooks—many of them practitioners of the finicky grooming and retro haircuts now de rigueur in Denver—dressed them in a variety of uniforms (punny tees, dress shirts, old-timey aprons), and sent them moving around the large room and open kitchen with an unhurried economy of motion that suggests deep training. In the evening, they cook and serve you one of the best dinners in town, and you leave feeling uncommonly satisfied. This, you’ll think, is why we go to restaurants.

Consider a starter of halibut cheeks resting on a pool of white wine pan sauce, mingled with a smooth celery-root purée and little fava halves, and topped by a knob of seared foie gras. I enjoyed that in early July, before Mercantile’s seasonal menu change. Halibut cheeks are well-known to fish lovers as the pearl portions of that muscly fish, but they’re still a quirky choice in Colorado. (Seidel and his chef de cuisine, Matt Vawter, love quirk. Witness the pairing of espresso and cheese on the market menu.) The favas were of-the-moment fresh. The foie gras signaled Seidel’s weakness for gilding the lily: You do not walk away from a Mercantile meal without realizing you’ve thrown down the gauntlet to your arteries. The dish was a triumph. 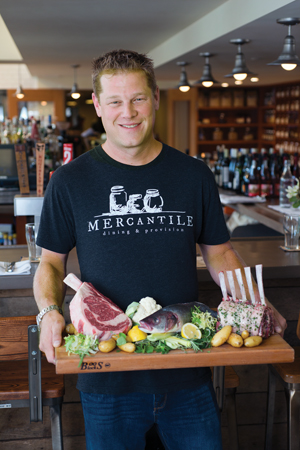 Or take the curious case of Mercantile’s shishito peppers, also a starter. These earthy capsicums, every tenth one or so fiery, came with a smooth, toasted-sesame caramel sauce that (more quirk) were mixed with bits of pig’s ear and sesame caramel brittle. I could have done without the brittle—not all lilies need that much gilding—but marrying a sweet, nutty sauce with the shishitos rescued them from the ho-humness that eventually afflicts all trendy ingredients. As for the pig’s ear, rather than the usual gristly strips, these were chunked, slow-cooked into melting collagen, and then fried to crunchy, succulent perfection.

Meanwhile, a main course of crispy half chicken proved why it’s wise to order yardbird if the chef is on his game. Boned and evenly cooked throughout, the portion was folded into a sort of chicken origami—skin on the outside—then roasted for exterior crispiness. It was served with an “heirloom grain porridge” that sounded dubious but was instead a savory, whole-grain gravy, and a salad of shaved asparagus and foraged mushrooms.

These dishes were home runs, as were a plate of tagliatelle with razor clams, lightly pickled white shrimp and sea urchin and an appetizer of mussels with toasted fregola pasta, fennel sausage, and a buttery tomato broth. Over four dinners, I rarely tasted food that was less than very good, whether it was pan-roasted scallops, octopus from the grill, or short ribs.

As ingredients come into season, generosity abounds. One night, foraged mushrooms popped up on at least four plates. Here and there, the chef indulges in pure showiness: A budino, offered as a vegetarian entrée, was a garlicky green pudding served with morels, asparagus, pickled ramps, soubise sauce, and piping hot “sprouted quinoa croquettes,” which reminded me, in a very good way, of McDonald’s hash browns. This was out-and-out fancy cooking with a slight wink. Well played, Mr. Seidel.

The cocktail list follows suit, running from interesting to quirky (roasted corn and bourbon?) to the “drinker’s choice” option. For this, you name your poison and specify “citrus and shaken” or “stirred and boozy.” I chose bourbon and citrus and shaken and got a sort of Kentucky pisco sour in a big glass with one of those ice cubes the size of a small office safe. Delicious—and the bartender was kind enough to write out the recipe so I could put the drink into home rotation. Wine offerings are notable for fairly priced excursions into Austria, the Loire Valley, and the Spanish provinces. There are also plenty of big-ticket bottles if your startup made it to its IPO.

Less well played were a couple of desserts that were precious without being particularly delicious, including a tube of mascarpone “parfait” with compressed rhubarb and a powdery “crumble” and a huge plate adorned with a crescent of disassociated bits and pieces: ricotta cheesecake, orange pound cake cubes, candied pretzels, fruit jellies, and orange slices. Stick with the pot de crème: a jam jar of crème chantilly, salted cardamom caramel, and thick milk chocolate pudding.

As you think about a Mercantile dinner, keep in mind that there are two experiences: formal table service over in the dining room and walk-in seats in the market/bar space and at the counter facing the open kitchen. Bar and counter offer their own performances—mixologist pas de deux versus full kitchen ballet. The latter is something to see, involving as many as a dozen cooks at their stations. I bet more than one Denver chef has sent employees to dine at the Mercantile kitchen counter to witness how the cogs turn in a top-notch operation. 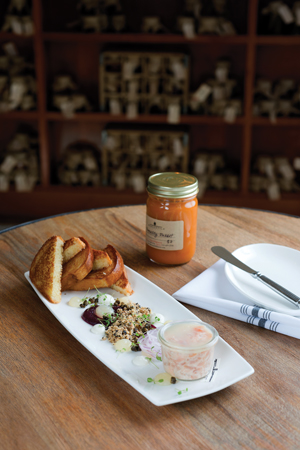 The procedure at breakfast and lunch is a little odd. Order at a counter, receive notification that dishes are ready by text message, pick up food at the kitchen. I’m not sure the get-it-yourself deployment makes the best use of Mercantile’s dining room. I’d like to see full lunch service because, in a restaurant this fine, that would be a special afternoon pleasure. That said, the pastrami sandwich is surpassingly succulent—a heap of house-cured fatty meat on toasted, buttered rye with aïoli, served with a little pot of pickles. It’s a sandwich best shared, unless you’re headed straight for a couch to work off the ensuing meat coma. There was also a complicated quinoa salad—lentil granola, feta, polenta croutons—that actually worked.

But dinner is the star, and here’s my prescription for a perfect Mercantile evening: Arrive an hour early and head for the shuffleboard tables that are the centerpiece of Union Station’s grand hall. Those two gleaming boards, which seem as long as an Amtrak car, capture the fun-formal energy of this brilliant urban redevelopment and set the tone for the dinner to come. Try to remember how shuffleboard is actually scored, enjoy an IPA or cocktail from Terminal Bar, then amble down the hall to the warmth and bustle of Mercantile. This is your city showing off.