I didn’t go to college at the University of Colorado Boulder, but I am a twenty-something, so when I cut someone off in traffic, I can tell they think I do. Thus, I tend to avoid Boulder’s “the Hill,” unless I’m ducking into Alfalfas, driving to the Boulder Farmer’s Market, or attending a show at the Fox Theatre. The Hill is where students hang, although don’t expect bohemia—CU isn’t really that type of school. On any day of the week, you’ll also find locals milling about, seeking quality eats and good times.

The Vibe: I’ve already mentioned the college once—it’s safe to say it never goes away (it’s literally across the street on Broadway). There are dozens of Greek fraternity and sorority houses in the neighborhood, which on the weekend makes for packs of young ladies and men in party mode. During the week you can find guys tossing discs on lawns, or hanging out on stoops. Like the University neighborhood in Denver, the Hill does a few things well: fast-casual-global cuisine, happy hours, and late nights. So don’t neglect a visit just because it’s brimming with coeds—after all, I’d go anywhere for $2 sangria.

Main Drag: Thirteenth and Broadway are really the only drags—most of the Hill’s businesses are located within a few blocks between two Starbucks. You could easily walk to Pearl Street (15 minutes), the Boulder Farmer’s Market (13 minutes), or the Boulder Public Library (10 minutes) from anywhere mentioned in this guide.

The Point Cafe sits where beloved offbeat coffeeshop Espresso Roma used to for 25 years. Some, apparently, are boycotting the Point in protest. I’m new to Boulder and not too bothered by this, especially since the Point has kombucha and nitro cold brew on tap, snickerdoodle oatmeal, fruit and juice smoothies, and croissant breakfast sandwiches, fresh and slightly compressed, like the best ones always are. For a late breakfast, Dot’s Diner is an institution, although on weekends you’ll catch me at Cafe Aion‘s Moroccan-Spanish-Coloradan brunch (more on that later). Dot’s is better on a weekday, when the diner’s less crowded and you can linger over biscuits and gravy or chana saag—and maybe even your Intro to Anthropology reading.

Cafe Aion—where you can catch either brunch or dinner.

Chautauqua Park, although not technically on the Hill, is less than 20 minutes away on foot and worth the walk. Hit the Meininger art store on Broadway before you go, and try your hand at documenting the stunning view from the top of the Flatirons. Along the way you’ll pass the Boulder History Museum, where for $6 guests can peruse more than 45,000 historical objects donated by Boulder area families over the years. If you feel like shopping, stop in Meow Meow Boutique on 13th for decorative notebooks, quirky accessories, women’s clothing, or fun gifts. Not only does the store gift wrap, but the staff is friendly and full of good advice (“Visit the Boulder Tea House for high tea!”). Albums on the Hill, next door, is always worth a stop, even if you’re 100 percent digital these days. Owner Andy Schneidkraut is a legend, the staff is knowledgable, and bands playing the Fox have been known to stop by (the War on Drugs was in a few weeks ago). There are also a ton of head shops on the hill (because college), but the Fitter, a glass shop, has been there since 1973 and has a reputation for good products, knowledgeable staff, and a devout customer base. 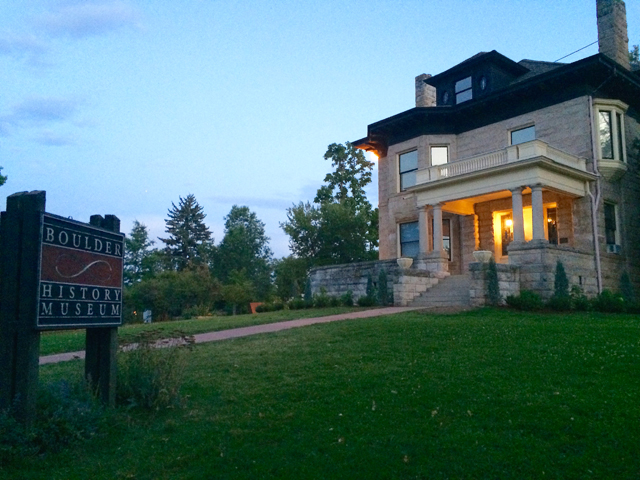 The Boulder History Museum, where you can check out more than 45,000 historical objects donated by Boulder-area families over the years.

Take a break for lunch:

The original Illegal Pete’s is on the Hill, and if you’re in the mood for something fast and flavorful, you’ll never go wrong there (especially when the beef and pork are from Niman Ranch, known for its humane, sustainably raised meat). People really like Boulder Bowls, but often I find myself feeling like that style—vegetable, protein, grain, worldly sauce—is how I cook at home. Momos, a Nepalese dumpling served with rich tomato achar, on the other hand, are difficult and time consuming to make from scratch. I get an order whenever I’m near a Nepalese restaurant in Boulder, which is often. Ghurkas on the Hill, located off College Avenue in an underground food court, makes an exceptional momo, as well as a slew of Indian/Nepalese dishes that you can get wrapped in a piece of naan, burrito-style. Be forewarned: If you order something spicy, it’s going to actually be spicy.

If you’re cozying up to watch a movie, get Terra Thai. If you’re going out, Cafe Aion is the spot on the Hill, primarily because of the weeknight deals. Tuesdays offers all-night happy hour ($2 sangria is the move—red or white and heavily spiced). On Wednesday night, you can get a bottle of wine and paella for $49, and on Thursdays, you can eat a bacon-Brie burger, wash it down with a Colorado craft beer, and listen to live music for $15. Another favorite for bites and drinks is Taco Junky and Tequila Bar—just don’t be tempted by the three for $5 taco Tuesday deal. The special doesn’t include any tacos on the actual menu, which are above and beyond. Drink your tequila at the bar, and enjoy creative bites like the Poc-Toc, with potato plantain fritters, cumin lime aioli, and avocado; or the Bulgogi, with Korean barbecue pork, Asian slaw, and sesame seeds. A few doors down is The Sink, a 92-year-old Boulder institution that gets rowdy on the weekends. When President Obama visited in 2012, he made an impromptu stop at the restaurant, where he wooed the coed crowd munching on pizza and burgers.

The Poc-Toc Taco at Taco Junky and Tequila Bar

For drinks, music, and dive bar vibes, head to No Name Bar in the strip mall off Broadway, under the same ownership as the adjacent Cosmo’s Pizza. In the same strip you’ll find Bova’s, which serves frozen custard as good as anything in the Midwest. The flavors rotate daily and range from classic chocolate to the unique lavender. For concerts, the Fox Theater has shows for everyone, whether you’re into indie rock or bluegrass. It’s small, but big enough to draw better-known bands, which makes for intimate sets. Innisfree Poetry Bookstore & Cafe hosts an open poetry night on Tuesdays, and it’s about as bohemian as things get on the Hill. Owsley’s Golden Road is a Grateful Dead-themed bar. Owner Jay Bianchi also operates its Dead-themed sister, Sancho’s Broken Arrow, and Quiote’s True Blue in Denver. All three host great bands and chill vibes. 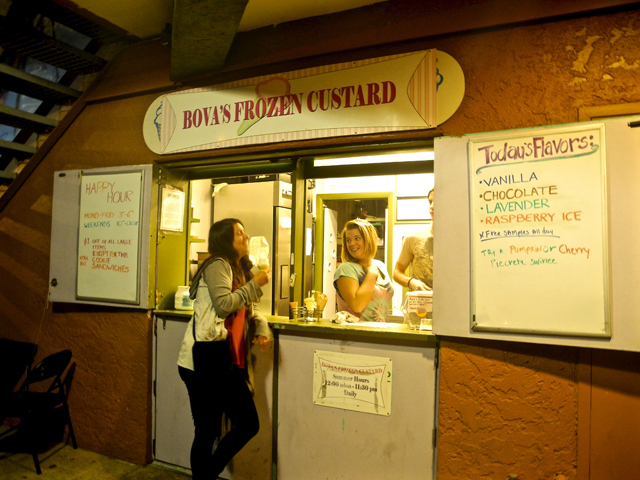 Boss Lady Pizza serves delicious New York-style slices anytime, but they’re especially tasty at 2 a.m. With pizzas like the Pestoroni (pesto, mozzarella, pepperoni, feta, bacon) and the Buff (crème fraiche, mozzarella, spicy buffalo chicken, gorgonzola bleu), and slices priced at $3 to $4, you really can’t go wrong. Don’t want to leave the party? Boss Lady delivers until 2:30 a.m., Thursday through Saturday. If you want to hate yourself in the morning, don’t miss the rite-of-passage that is the Fat Shack. Everything is fat at the Fat Shack, from the Fat Doobie—chicken fingers, french fries, onions rings, mozzarella sticks, and honey mustard on a roll—to the Fat Cow, a sure bet due to the presence of bacon and mac and cheese bites. If you’re going to indulge, you may as well get the fried pickles and the fried Oreos, too. And if you’re no longer in college, make sure you pop an Alka-Seltzer.