Editor’s Note 1/19/16: The reverse-auction home, which was on the market for 45 days, sold for $2.45 million ($1.5 million less than the original asking price). The sale process took about three months, compared to the industry average of two years for multimillion-dollar luxury homes, according to Keller Williams Realty DTC’s Colorado Dream House Team.

For art lovers and antique hunters, shopping at an auction usually means bidding up the price until the competition drops out. But for one luxury home in Golden, the auction actually moved in reverse: A listing price of $3.95 million was dropped $150,000 every three days.

“We like to get creative,” says listing agent Dan Polimino, owner of Colorado Dream House Team at Keller Williams DTC. “We figured we needed to raise some eyebrows.” 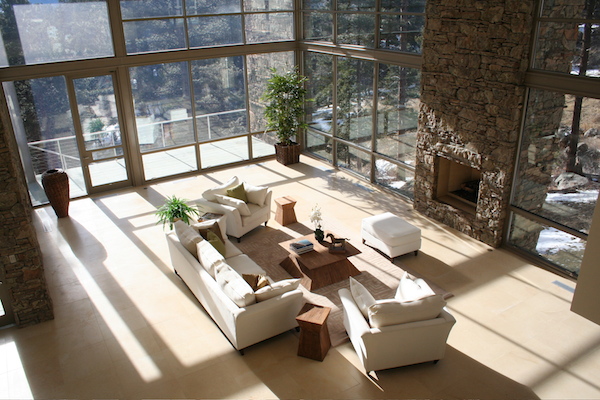 “It’s a fantastic home, and the views are unbeatable,” says Polimino. But even in a red-hot real estate market, luxury homes often sit longer than lower-priced options. And when a luxury home like this one is located off the beaten path, it’s not unreasonable to prepare for two years on the market, says Polimino. During that time, price adjustments respond to potential interest. Determining the sweet spot is often simply a matter of time.

“Our seller knows we like to be creative, so he challenged me to try something different,” Polimino says. Up to the task, Polimino and his associates proposed the reverse auction. The home was appraised for $3.7 million, and Polimino prepared a full inspection report for potential buyers. The auction kicked off on Monday, September 14. All details were offered online, where a clock counted down the minutes until the next $150,000 reduction. Interested parties signed up with their email addresses to keep abreast of the price. Meanwhile, the seller retained the right to halt the auction at any time.

In the first two weeks, 20 people signed up for price-reduction notifications. “I was surprised by the response,” Polimino says. “I didn’t think we had 20 buyers in the $3 million to $4 million range.”

The sales team then arranged for three consecutive open houses, and about 90 people walked through the home as the price continued falling. On Thursday, October 22, the seller stopped the auction at $2.75 million and called for all offers within 7 days.

“I never knew the seller’s price,” Polimino says. “He just told me, ‘Let let it ride; I’ll let you know when to stop.’ ”

With two private showings this week, Polimino is hopeful the home will be under contract within weeks. For a Realtor who saw a listing drop $1.2 million in a month, Polimino seems optimistic.

“It’s not scary for me. I’m sure it was scary for the seller—but he’s always been able to hit the stop button,” Polimino says. “We’ve had fun”—which is more than you can say for most conventional home-selling processes.