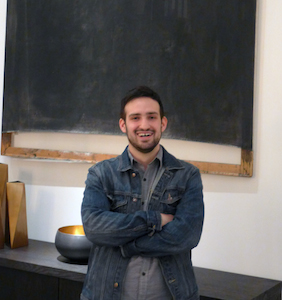 Emerging artist Paul Weiner, 22, chose a tough subject for his most recent body of work: the 2012 Aurora theater shooting. As someone who grew up in Aurora, Weiner wanted to learn more about what had happened that night. But public information was scarce. The documents he did find were heavily redacted. Those dark black lines became a recurring element in Weiner’s earliest explorations of the topic. As the trial got underway earlier this year, additional details emerged, and Weiner’s graphite and acrylic works became more conceptual in nature (ripped canvases are an obvious example) rather than strictly duplicates of those documents. In a beautiful touch, the sides of the canvases are also painted, creating a welcomed sense of containment and finality.

Currently, you can see 11 of Weiner’s works at the behemoth new four-story Restoration Hardware—officially called RH Denver The Gallery at Cherry Creek—at the Cherry Creek Shopping Center. All are available for purchase, though some have already sold. A selection of his paintings is pictured above.

More: Weiner has an ongoing crowdsourcing project called Archiving Aurora, an effort to portray the city more positively. Residents are invited to upload photos that depict everyday life there, dispelling the violent narrative that overtook it in July 2012. “The truth,” Weiner wrote to me earlier this year, “is that Aurora is a large and multifaceted suburb with a vibrantly active community. With this project, I hope to offer an alternate view of Aurora.” You can also share your images on Instagram using the hashtag #archivingaurora.