If Colorado had an official state accessory, it’d probably be a bag. Between beloved backpack architects like Osprey and newer master bag crafters like Topo Designs—by our completely unofficial estimates—the number of Colorado bag makers is gaining on microbrewers.

One of the newest additions to the field, Sword & Plough, highlights something else central to Colorado: our active military and veteran populations. Founded in 2013 by sisters Emily Núñez Cavness (pictured below, left) and Betsy Núñez (right), Sword & Plough not only makes its totes, backpacks, and Dopp kits from recycled military uniforms and gear, the company also works to employ as many veterans as it can, and donates 10 percent of its profits to organizations that support veterans. (Veterans also get 20 percent off purchases.) Co-owners Emily also happens to be an Army first lieutenant currently serving with the 10th Special Forces Group at Fort Carson. 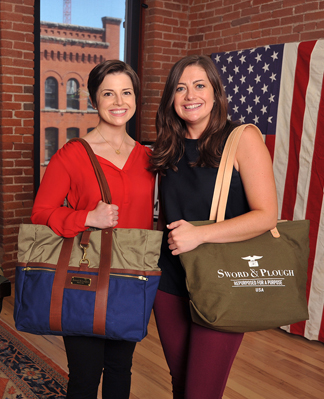 The idea for Sword & Plough grew out of Emily’s experience at Fort Benning, where she attended Airborne School the summer before her senior year at Middlebury College, where she was an ROTC student. During down time, she spoke with other soldiers about some of the struggles their friends who had left the military were having finding employment. It bothered Emily that people who had given so much discovered finding work outside the military so difficult. She wanted to do something about it. And then, the light bulb: As a soldier, and as the daughter of an Army colonel, Emily regularly saw used military gear tossed, often being burned or buried when it had outlived its usefulness. Making something from that wasted fabric could help both the planet and veterans, she figured. So in April 2013, Emily and Betsy launched a Kickstarter campaign for $200,000 to start Sword & Plough. Within two hours, they’d hit their goal.

Three weeks later, Emily deployed to Afghanistan and Sword & Plough began shipping its first products. To date, the company has shipped more than 7,000 products. “We have people buying the bags because they like the way they look,” Betsy says. “Or because they support the mission and want to give back to the veteran community. But it all creates conversation around veteran employment.” Sword & Plough itself now supports almost 40 veterans in multiple states, among them Sword & Plough’s operations director (hired directly out of the Army), a Navy veteran who’s the warehouse manager, and the company’s Oklahoma-based screen printer, who is an Army veteran. Sword & Plough has also up-cycled more than more than 30,000 pounds of military surplus, some of it simply extra fabric, and some it is previously used military gear that’s been donated. So your Weekender bag ($359, below) might be made out of a repurposed army tent, or your Field Pack backpack ($159) might have had a previous life as a soldier’s barracks bag.

Sword & Plough’s impact and success has helped earn the sisters appearances on Good Morning America, Forbes “30 under 30” list, and even an invite to the White House as part of the 1st Annual White House Demo Day for entrepreneurs. And now, they’ve got a shot at scoring an appearance on one of the country’s biggest stages: the Super Bowl. Selected as one of 10 finalists from a pool of 15,000, Sword & Plough is competing to win Intuit Quickbooks’ Small Business Big Game competition. (Fellow Colorado company ezpz, maker of Happy Mats, is another finalist, by the way.) The prize is a free 30-second commercial spot during the third quarter of the big game. And the public decides the winner: The company with the most votes wins. You can vote here, but do it before the competition ends on Nov. 3. If you’d like to vote with your dollar, too, stop by Sword & Plough’s booth at the Denver Flea holiday market (Dec. 3–6) or buy online at swordandplough.com.

—All images courtesy of Sword & Plough