The Draw: A well-prepared, meat-centric menu from an admirable butchery program, plus a meat counter for take-home steaks, chops, and roasts

The Drawback: Cooking can be a bit inconsistent; vegetables need some attention

One wearies of the fussy dissertations about provenance, purity, and technique that make up a lot of restaurant menus these days. I’m grateful to chefs who let their food speak for itself—and Hosea Rosenberg, owner of Blackbelly Market in Boulder, is one example. Rosenberg could have turned his restaurant’s butchery and charcuterie programs, managed by Nate Singer, into a lot of nose-to-tail proselytizing. Breaking down a steer or hog carcass is, after all, big work—as is getting the right texture and flavor out of all that carefully ranched flesh, bone, and blood. Instead, Rosenberg just stocks a meat counter near the door with surplus cuts for takeaway sale. On the dinner menu, he marks the day’s specials as “from the butcher”; there are a few words about sourcing and cooking, but they are minimal. There’s no mention, unless you happen to interrogate Singer, of admirable details like the “30-day whole carcass hangs” for Carter Country Meats’ Black Angus (from Wyoming), which come after the animals have grazed on “31 different grasses and wildflowers from the Bighorn Mountains.” I like that reticence.

Those butcher dishes form the heart of Blackbelly’s menu. Lamb, beef, pork, and bison are generally grilled and plated with sauces, preserves, and salts and sometimes accompanied by vegetables (pork with roast carrots, for example, or bison with chanterelles). The number of servings available each night is listed, and you may want to pounce. On one occasion, nine orders of bison were offered, but just two orders of red Duroc pork. Scarcity of some cuts is less of an irritant than evidence of what small and local actually means.

The rest of the menu, which contains maybe a few more dishes than the kitchen can perfect at one time, runs to charcuterie, small plates, and large plates. I wouldn’t go so far as to describe the cooking as consistently brilliant, or even consistent, but it’s solid and occasionally inspired, and the overall Blackbelly experience is a pleasure. That pleasure is enhanced by the room (which has a richly detailed modern-industrial and open-kitchen feel, yet remains human-scale) and by the service, which stays friendly and casual without losing the point.

An eight-ounce Denver steak (one of the daily offerings) came with roasted garlic, a piquillo chimichurri sauce, and flake salt, and it was a right proper bit of beef. The Denver is a flavorful cut from the shoulder, and Blackbelly’s version was rare, as ordered, and full of juice and beefy flavor, which is not always easy to achieve with free-range meat. (Rosenberg once told me that he likes to dip the cooked meat in a pan of seasoned and rendered fat just before serving.) The sauce was restrained, not a garlic sledgehammer, with a pleasant grassy flavor. I also liked the first half of the aforementioned Duroc pork chop, which I ordered in the 16-ounce size as soon as I noticed there were only two available. (The waiter promptly scurried away to head off any other bidders.) The chop had a nice ring of fat and tasted of rich, properly fed pig about the edges and at the bone. But, being cooked a bit beyond the requested medium, it was dry in the center. 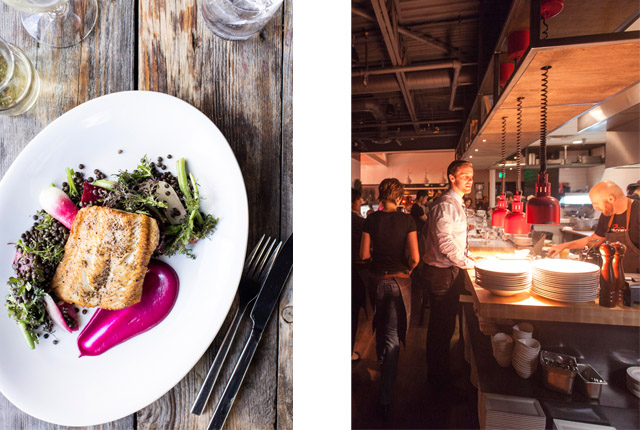 Pictured: Black cod with beluga lentils; Rosenberg on the line

This is a meaty menu, for sure: sausage, ham, terrine, tartare, and marrow, just for starters. The house-made guanciale terrine, from the charcuterie menu, was a little packet of jowly pork fat wrapped around a sweet center of bacon jam. As a guy who will eat Benton’s Smoky Mountain Country Hams’ bacon raw, I liked the sweeter, subtler touch here. Meanwhile, a succulent, ultra-porky Petit Jesu salami proved that Blackbelly chooses wisely when it looks for artisan suppliers: It came from the celebrated Salumeria Biellese in New York and equaled, in the balance of its cure, anything I’ve had in Italy. 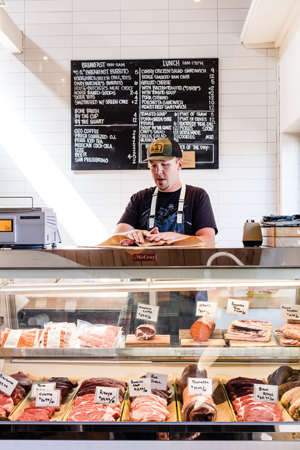 Not everything delicious formerly walked on four legs. Blackbelly’s half portion of Boulder local chicken with Kennebec fries was a state-of-the-art comfort plate—the chicken perfect, juicy and salty; the fries irresistible. A dish of prawns with grits moved the shrimp-and-grits flag forward, adding collard greens and some sweet “pepper jelly” that tasted rather like my favorite Javanese sambal. As they should, the prawns came with heads on, for sucking. The dish nodded in the butcher’s direction with a cube of pork belly. I also liked Blackbelly’s pan-crisped, oven-roasted halibut, which sat on a lemony sauce and came with a jumble of pea shoots, sugar snap peas, and asparagus.

On the deficit side of the ledger, I have a locally sourced bone to pick with Blackbelly’s “classic Caesar” salad, which was too lightly dressed and garlicked to honor the name. (Why do so many restaurants fumble this simple salad, which rarely benefits from improvisation?) The “blistered” green beans with ponzu and spiced walnuts failed to reach charred and were squeakily underdone. A side of foraged morels and chanterelles was sopping with so much oil that the fungi flavors were muddied. I finally concluded that Blackbelly could use a vegetable program to rival its meat Ph.D. As for desserts, there was a brilliant crème fraîche ice cream with a slice of peach cake, but the carrot cake reminded me why it’s favored at bake sales: comfort and heft, no flair.

Blackbelly’s bar offerings are less impressive than its meat program, but solid (Rosenberg says an overhaul is forthcoming). There are seven house cocktails, none overly fussy, including an “Iowan Smash” made with Templeton Rye, Meyer lemon, mint, and blackberries. The wine list could use lengthening, but the good news is that all 18 bottles on a recent menu were available by the glass, allowing for a Müller-Grossmann Grüner Veltliner with a starter and a J. Christopher Oregon Pinot Noir with the main. Both were interesting wines and fairly priced.

During the day, Blackbelly does breakfast and lunch service from the counter, a casual approach that seems to be working—the place was bustling on two recent stops. I’ve taken to dropping by for, say, the lamb meatball grinder, which is big enough for two, or the quinoa and roasted vegetable salad. Other days the menu included a BLT with house-made bacon and a bologna sandwich.

My real reason for visiting during the day is to raid the meat counter. There’s a small, changing selection, depending on which carcass has been broken down recently, and I’ve seen 45-day-aged steaks, a beautifully fat-capped pork roast, spatchcocked chickens, and some less expensive cuts of beef. Some are vacuum-packed (sometimes with herbs and marinades), which is not my favorite way to buy meat; however, Rosenberg says, the technique keeps the cuts at peak freshness longer. Sealed or not, the quality is indisputable: Two magnificent Berkshire pork chops came off my grill to my wife’s declaration that she’d never tasted finer meat. 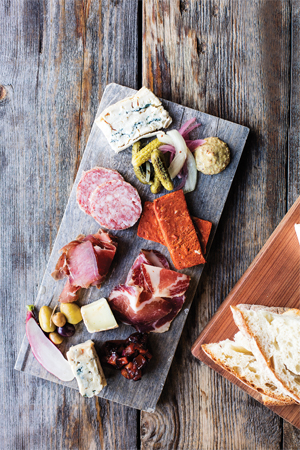 The butcher takes special orders too. “We just brought in pig bladders for some guy this week,” Rosenberg recently told me. “If we’re allowed to sell it, we’ll get it for you.” He suspects some of the more challenging stuff is being ordered for old-timey family recipes by people who haven’t been able to source pig bladders or stomachs elsewhere. Meanwhile, Singer has his sights on elk and yak for the meat program.

After my last visit, I received some late-breaking good news: Rosenberg has acquired the property next door to open a full-on butcher shop sometime in the new year. It will sell meat along with breakfast and lunch offerings. “The space will be a little more raw and funky than the restaurant, but still keeping the look,” Rosenberg says. “It will be really open, so customers will be able to see the butchers working in the back.” When that happens, the meat counter in Blackbelly will be converted to a salumi and oyster bar.

Pictured: Blackbelly house-cures much of its charcuterie. Order the Grand Selection for a taste of everything.

I can’t wait. In the meantime, if the market counter is selling Blackbelly’s sweet corn cookies, buy at least two. These are made with freeze-dried corn and corn flour, have an astonishing salty crunch, and are simply the best cookies I have eaten in a year. And how likeable is that? A brilliant house-made cookie in a well-crafted restaurant that can also sell you a pork roast to take home. I can’t think of a better word for Blackbelly than that: likeable. Even if there are a few flaws, it’s a quality that makes me want to go back tonight.