Christopher Marlowe was one of the 16th century’s greatest playwrights, an Elizabethan poet so talented his work is said to have influenced William Shakespeare. Denver’s Chris Marlowe also happens to be a man who craves a big stage—a former actor and Olympic gold medalist in volleyball who this year celebrates his 11th season behind a microphone as Altitude Sports & Entertainment’s TV play-by-play voice for the Nuggets. As an homage to the former (and to the start of the Nuggets’ regular season), we give you the extraordinarily unpredictable life of the latter presented in four acts.

ACT I
In which our protagonist, growing up in Southern California in the 1960s, discovers volleyball. “I lived three miles from Santa Monica State Beach. Volleyball seemed like a great lifestyle. I’d get up in the summer, go to the beach, play in the morning, get lunch, sneak a beer, play the rest of the afternoon, go into the ocean, and come back the next day. It was a great way to meet girls.”

ACT II
Following a collegiate national championship at San Diego State University, our protagonist makes the U.S. men’s volleyball team, which fails to qualify for the 1976 Olympics. He works as a bartender in Malibu—but he longs for more. Both his parents are actors, and he considers the family business. “Three months into acting class, in 1977, I auditioned for a part in a soap opera. I got it. It was called Love of Life. At the time, my mom was on The Young and the Restless, and my dad was on Another World. We were like the royal family of soap operas. After that, I got a part on the sitcom Highcliffe Manor. It had a chance. I played Bram, a man blown up in an experiment. I was being put back together in the basement with body parts from a graveyard. We got time-slotted against Mork and Mindy. By our fifth episode, we knew we were done.”

ACT III
Our protagonist bounces around Holly-wood—while also winning international beach volleyball competitions. Yet, in 1984, he’s at the lowest point of his life. That April, he’s cut from the Olympics-bound national team. He goes back to bartending. But then…a phone call. “In May, the U.S. team went to Russia. It’s a Friday night, and I’m going to my job. The phone rings. This voice says, ‘Have you heard the news?’ It was [volleyball legend] Karch Kiraly’s dad. ‘I heard it,’ I told him. ‘We beat the Russians.’ He said, ‘No, no, the other news. Someone broke his leg. If that asshole coach doesn’t f___ you over again, you’ll be back on the team!’ Three weeks later, we voted for team captain. I was elected unanimously. Two months later, I’ve got a gold medal around my neck.”

ACT IV
After he ends his volleyball career with an Olympic gold, our protagonist dumps acting and gets into sports broadcasting. He works everything from boxing and cliff diving in Acapulco to Olympic volleyball. In 1994, he’s asked to do play-by-play for UCLA basketball. A decade later, he learns Altitude needs a play-by-play man for its Denver Nuggets broadcasts. “I mobilized everyone I knew. Kiki Vandeweghe was the general manager at the time. We’d graduated from the same high school. I sent him an email asking him to help me. I had Bill Walton. I had Dick Ebersol, from NBC. Eventually, I got the job. My family and I were in San Diego at the time. We flew to Denver and found our house. I was so excited. Doing play-by-play in the NBA is a dream job. Maybe it was fate. You know, I’ve had pretty good luck with fate.” 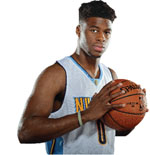 SOUND CHECK
We ask the man who’s called nearly every play the Nuggets have made for the past decade for a little perspective on our new additions.’

Marlowe On…Rookie Emmanuel Mudiay
“I was in Los Angeles when Magic Johnson first got there. Mudiay’s got a similar game. He’ll make everyone better. He’s going to be the leader we haven’t had. He could be that way for the next 10 years.”

Marlowe On…Coach Michael Malone
“Of all the coaches I’ve seen here, he has the best feel for how a team should defend. He’s got a very effusive style. You get the feeling he’s in it with you—he’s always positive.”