Although traditional eggnog certainly has its place at our winter table (especially when spiked with bourbon), ’tis time you made a fresh round of cold-weather cocktails part of your holiday traditions. We asked local bartenders to reveal the best not-nog concoctions on their menus. The picks all have one thing in common: While they begin with simple flavors like maple syrup, ginger, and apple, a dash of inventiveness creates surprising (and festive) results. Whether you’re looking to inject some joyful spirit into Scrooge-y guests or simply stay warm, these libations are sure to stir up some holiday cheer.

Punch In The Mouth 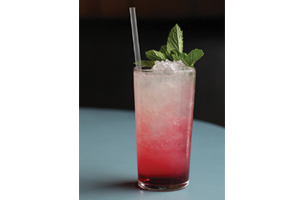 3. Double-strain the shaken cocktail mixture over the ice and top with a small splash of soda water. Garnish with a mint sprig.

2. Pour into a coupe glass, and add about cup of seasonal fruit such as chopped apples, pears, or oranges.

You’ll Shoot Your Rye Out

2. Stir 15 to 30 seconds, and then strain over a large rock of ice in an old fashioned glass. Express an orange peel over drink, and place in glass.

1. Make the whipped cream: Combine 1 cup heavy whipping cream, 2 tablespoons Dram Citrus Medica bitters, and ¼ cup sugar in a chilled bowl. Beat on high using a hand mixer until thickened to your desired texture. Serve right away, or cover and store in the fridge for up to a week.

3. Combine warmed hot chocolate and 1½ ounces of yellow Chartreuse in a drinking mug. Top with a big dollop of the whipped cream and chocolate shavings. 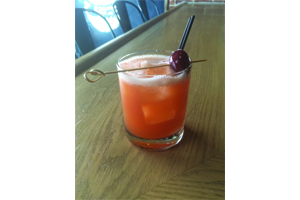 1. Make pineapple syrup: Combine a 1-to-1 ratio of unsweetened pineapple juice and sugar. (12 ounces of each should make enough for 20 drinks.) Stir.