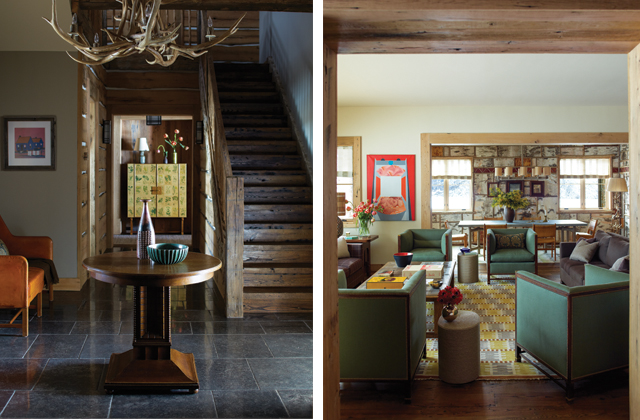 Above left: The entry’s antler chandelier provides just the right amount of mountain novelty—without overdoing the Western ski-house look—and contrasts nicely with the clean lines of the 19th-century Belgian Arts and Crafts table and 1940s sofa (by Kaare Klint for Rud Rasmussen). Above right: In the living room, four custom chairs (atop a vintage Swedish rug) provide ample seating. 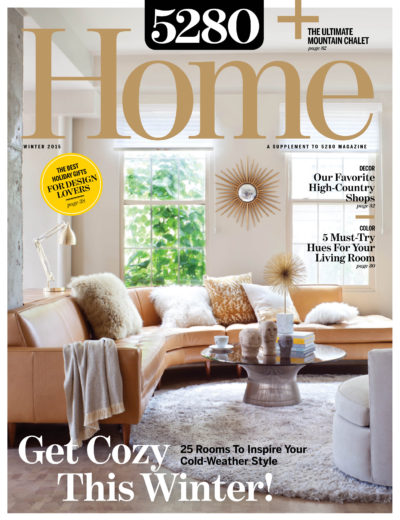 It’s not difficult to find magnificent houses in the rolling foothills beyond Aspen and Snowmass. But few have the sophisticated touch and, well, je ne sais quoi of this renovated mountain chalet by interior designer Caroline Sarkozy and architect Laurent Bourgois of Paris-based CSLB Architecture-Décoration. The home is a reflection of their collaborative approach. “We do not believe you can dismember a house project into an architectural project on one side and a decorative project on the other and have a harmonious result,” Sarkozy says. 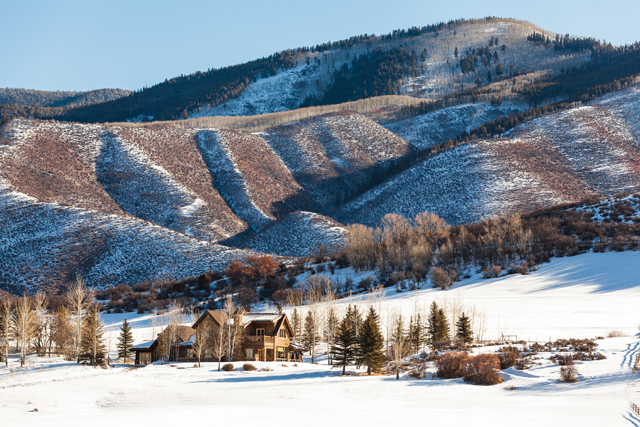 The owners—a European couple with international tastes who had enlisted Sarkozy to design two other residences—hail from London and Sweden, and they split their time in the United States between New York City and Aspen. Drawn to the sweeping views and high-country seclusion outside the ski resort town, the couple purchased this stunningly located (yet severely dated) house knowing it would need an overhaul, both inside and out. “It was a typical 1980s Aspen mountain home,” says Sarkozy, who skied often in Aspen during her college years. “Very high ceilings for rooms that were too small, in my view. It lacked authenticity.”

Above: The custom blue island and dining nook are the centers of activity in this colorful kitchen (the bench is upholstered in Aissa Dione Sahara fabric). Belgian bluestone on the counters and floor finds a contrast in the light walls.

The first step was redesigning the entire floor plan. The team gutted and reorganized the interior, expanding the footprint to add a new kitchen. “The proportions of the rooms were re-established to [provide] warmth and charm,” Sarkozy says. 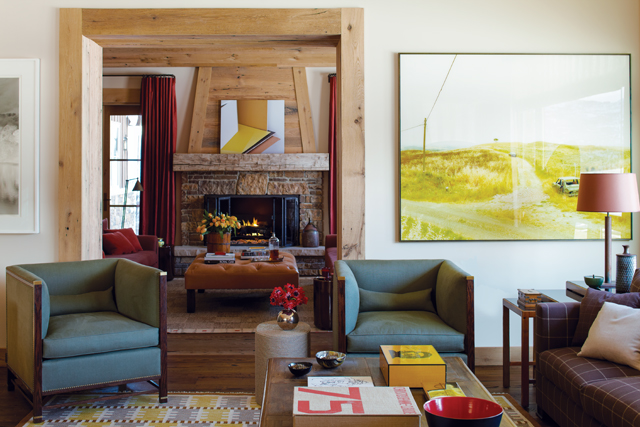 Above: A piece by German photographer Elger Esser hangs in the living room.

When it came to designing the inside, Sarkozy played to the home’s natural outdoor surroundings. The deliberate choice of materials, such as the custom birchwood wallcovering in the dining room, brings a rustic feel to the space, which is balanced by the uncomplicated aesthetic, rigorous symmetry, and clean lines. Most of the late 19th- and early 20th-century furniture is Swedish, French, or American—meant to reflect the owners’ heritages and travels. And in a tip of the hat to the home’s locale, the color palette is inspired by spring in the mountains. “We kept a very simple design line, bringing the tremendous views of the mountains into the house,” Sarkozy says. “The choice of details, the eclecticism of the furniture, and the fabrics give the house a sense of luxury and sophistication.” The overall effect is a worldly chalet that feels right at home in the Rockies. 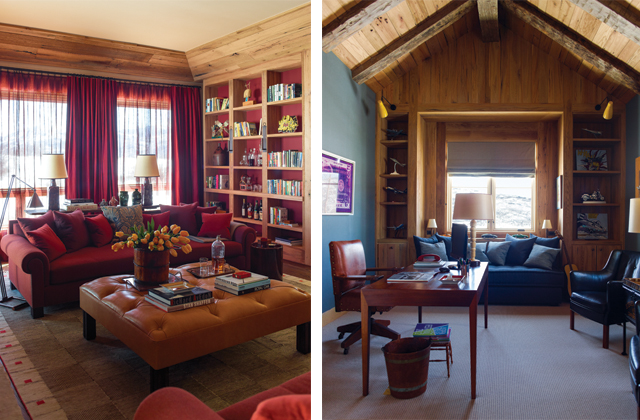 Above left: Sarkozy combined boldly colored sofas (upholstered in red wool fabric by Bruder) with a rich leather ottoman (upholstered in Moore & Giles’ Jakarta-Butterscotch) for a cozy effect in the library. Above right: Exposed beams—brushed antique oak, stained gray—in the office give a log-cabin feel. 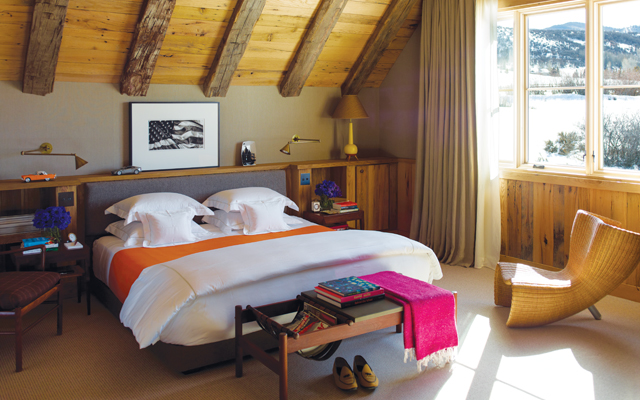 Above: In the master bedroom, the decor leans more modern (see the Ron Arad wicker chair and tripod table lamp).