The Draw: A fun tour through Southeast Asia—and beyond—via its street food

The Drawback: Playful interpretations don’t always nail the essences of these great dishes

There are food stalls in Singapore, Bangkok, and other parts of Southeast Asia to which I would happily award four stars. When I lived in Southeast Asia for three years as a teenager, and then when I returned on travels (most recently to Bali in October), the food stalls and warungs often delivered as much eating pleasure as Paris’ or New York City’s fancy-pants cooking temples, whose service and food often leave me crying uncle long before the astronomical bills arrive. There is such a thing as too much fanciness, and street food is the universal antidote. Which is not to say that hawker food is always simple cooking. Nasi lemak, Malaysia’s sublime version of the South’s meat-and-three, is a multipart, full meal on a plate, and no other chicken soup matches the masterful interplay of flavors you’ll find in Surabaya’s soto ayam. The herb-and-spice pastes that characterize dishes throughout the region are small masterpieces of flavoring.

Chef Lon Symensma fell in love with street food while cooking and traveling in Southeast Asia. Ryan Gorby, his chef de cuisine and partner in Cho77, followed suit. The website says the restaurant is a “true homage”—thus they set the culinary bar high. To justify, Symensma and Gorby must reproduce, or at least translate (and therein lies the usual debate about “authenticity”) the great hits of several cuisines without, as often happens, pushing flavors to a vague middle. I was excited to go to Cho77 because I’ve spent a lot of time in my own kitchen trying to recreate complex food-stall flavors.

The restaurant itself is designed in the standard Broadway decor idiom of the moment: brick and dark wood and exposed ventilation ducts, with a line of high-top chairs up against a bar. To that Symensma and Gorby have added Asian touches without tilting into kitsch: a bicycle food cart suspended above the door and bits and pieces of regional crafts and art, all brought back from their travels to Southeast Asia. Lamps and lights, as well as the room’s narrow length, suggest the food- stall theme. There are fun touches, such as the bathroom sinks adapted from woks. It’s a comfortable space, though I do wish Cho77 pushed the street theme a bit harder.

After sampling pretty much everything on the dinner menu—a half-dozen shareable starters, a half-dozen mains, and two desserts—it’s clear that Cho77’s true homage does not involve the post-doctorate-level rigor of a chef like Andy Ricker, of Pok Pok in Portland, Oregon, Brooklyn, and Los Angeles, whose cooking induces flashbacks for anyone who’s eaten in Thailand. Cho77 is more about riffing than replicating. That said, the underlying flavors and textures are often specific and clear. Even when you have three noodle-based entrées on one night, as our table did, each stands out as distinct. The pad thai had a tart tang and good “wok hei” notes (that’s the char flavor that comes from a well-seasoned carbon steel wok over jet-engine heat). The won ton noodles had proper egg noodle chew. And the beefy soup with lo mein had a complex five spice broth I could not resist drinking. (Broths are taken seriously at Cho77 and given names like pork bone tea.) To these foundations the kitchen adds well-crafted goodies: crusty, sweet fried pork belly to the won ton bowl; spicy minced beef and garlic chives to the lo mein.

One standout dish that establishes the kitchen’s flavor bona fides—even while ad-libbing in presentation—is the Thai coconut chicken curry, a version of the northern Thai and Burmese dish khao soi. It’s served in an Indian tiffin box, whose top compartment houses a clutch of Thai herbs, a slice of lime, and some crunchy fried noodles. The curry is in the bottom. You can’t go terribly wrong with coconut milk curries, which are almost French in their creaminess, but Cho77’s simply tastes deeper and more real than most. The restaurant’s ginger fried rice, with seafood, Thai basil, cucumber, and scrambled egg, is also on sound footing, fried rice being harder to get right than most cooks think. 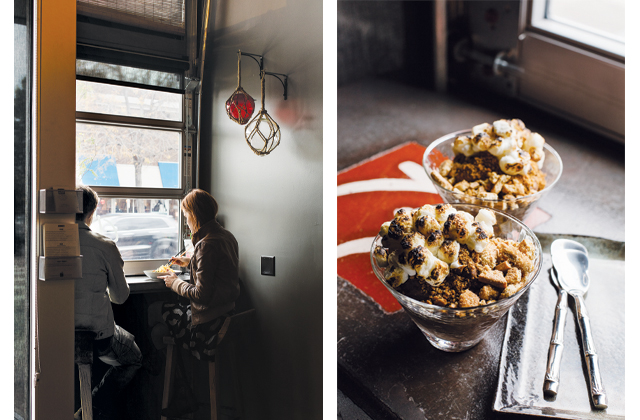 But riffing entails risk. What in tarnation was pickled watermelon slaw doing in my Szechuan lo mein? (The fruit, grainy and bland, was by no measure pickle-y.) As for a scallop ceviche starter, I’m unclear on when ceviche made it across the seas from Latin America to land in Thai sesame cracker cups, capped by a dab of kaffir lime foam and sprinkled with bits of pineapple. It was as if a wedding caterer barged into the kitchen with a bright idea. Sometimes, too, the kitchen’s technique simply doesn’t seem fully tuned to Asian street craft: In the wagyu beef satay, succulent bits of meat had interesting fish sauce and lemongrass flavors but missed the sizzling char that satay vendors—wildly fanning coals as sparks shoot into the air like fireworks—achieve as a point of honor. In October, an old gentleman pushing a bicycle food cart on a Bali backstreet served me 13 little sticks of chicken satay (two bits of meat and one of fatty skin on each) with exactly that char. Cho77’s satay would benefit from less emphasis on the fancy meat and more on fire-to-table timing.

I’m not opposed to fusion play. Cho77’s roti flatbread, with bacon relish, curried lentils, and a fried egg, was a right savory appetizer, the crust almost like puff pastry, covered with a layer of dry but soft lentils and a nicely cooked egg. The little appetizer caddy of “Peking” duck buns (Cho77’s quote marks, not mine) involved perfectly steamed, spongy buns enfolding pulled duck meat with sweet hoisin: a tasty nod to the classic, though the promised bits of crispy skin were nowhere to be found. A midday weekend special of poached egg and ham steamed buns with green cilantro hollandaise was an almost Seussian concoction, but it worked. And the food, both at night and morning, was served with cheery efficiency. 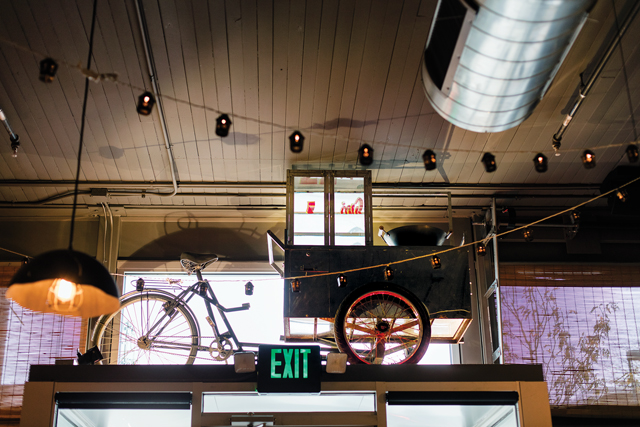 Symensma and Gorby bought this bicycle food cart in Ho Chi Minh City, Vietnam, and installed it above the front door.

With street food, often eaten on sweltering nights in Asia, must come quenching drinks. My favorite is a cold beer, and at Cho77, Lao Wang lager on tap or Firestone Walker Brewing Company’s Easy Jack IPA by the bottle do the trick. Don’t overlook the cocktails, however. Cho77’s bar knows the difference between throwing a bunch of disparate ingredients together and concocting a well-integrated drink. The Drunken Monk, made with Leopold Bros. gin, mint, kaffir lime, and grapefruit rice beer, is a delicious, sweet-tart mystery. In the Mai Pen Rye, a sweet slurry of fresh peach and maraschino liqueur was cut through by the spice and heat of James Oliver rye whiskey. The sake-lychee spritzer at brunch was a delicate, aromatic treat. The only failure from the bar: something called the Crouching Tiger, which was too dilute by half.

Sweets are often not a strength of Southeast Asian street vendors, so Cho77’s small list of Asian-tinged Western “happy endings” is appreciated. The dark chocolate tart with Asian pear and sesame caramel was a nice surprise, and I haven’t had a sherbet better than Cho77’s milky, citrusy version, flavored with lemongrass and kaffir lime.

On balance, Cho77’s menu would benefit from a bit less experimentation, some tightening of techniques here and there, and—on my wish list at least—the addition of a few more standards: the great mussel crêpes of Bangkok, for example, along with the coconut-oil fried chicken of central Java, the sublime laksa of Singapore, and maybe a savory stuffed murtabak pancake from Malaysia. Symensma and Gorby have the chops to make Cho77 an outstanding street-food restaurant. Right now it’s a somewhat quirky, pretty good one.