When Jeff and Monica Lubbert found the solution to the problem of their too-small Jefferson Park condo in a 2,100-square-foot modern home in Five Points, the couple’s biggest concern wasn’t what was going on inside the house (shoddy finishes and a cold aesthetic). It was what was happening outside. “In 2009, Five Points was still transitioning,” Monica says. “We made at least several visits to the area. We went to Blackberries [now Coffee on the Point] at least three times. We took our friends with us to make sure we weren’t crazy.”

Not all their friends were convinced, but the tours left the couple confident that the area—a once-thriving cultural center that was neglected during the ’70s and ’80s—had begun the process of revitalization. So the Lubberts bought the three-bedroom, three-bathroom home for a steal (thanks to the recession) and turned their attention to doing a little revitalizing of their own on the interior.

More from our Winter 2015 Issue

The first-priority fixes: getting rid of the Miami-esque feel downstairs, an effect amplified by black tile around the massive see-through fireplace in the den, and the acid-washed concrete floors throughout the bottom level. “It was cold in terms of aesthetics, but also in terms of temperature,” Monica says. Every morning, she’d get eight steps from the bottom of the stairs and could feel the cold air on her toes. The vast amount of glass downstairs only made things worse.

Monica dedicated hours to perusing home-design website Houzz for modern design solutions and kept coming across projects from Denver interior designer Megan Moore of Dado – Interior Architecture and Design (formerly Swiss Milk Studio). Monica reached out. She couldn’t have found a better fit than Moore. “In my residential design class in school, I designed a house just like the one in Five Points,” the designer says. “When Monica asked me if I was interested in the project, I was like, ‘Of course I have to design this. I’ve already done it!’?” 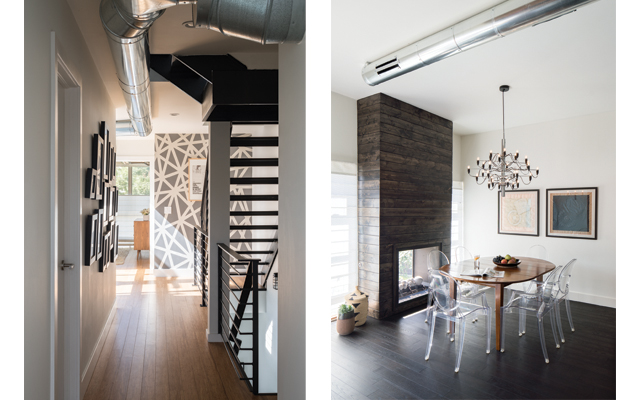 Hallway: Monica painted the second floor’s gray-and-white hallway wall herself. The geometric design helps marry the triangle-bedecked downstairs with the upstairs. Dining Room: Homeowners Jeff and Monica Lubbert warmed up the dining room’s aesthetic by facing the see-through fireplace from floor to ceiling in pine, but they kept the modern feel with a Flos chandelier and Philippe Starck Ghost chairs. 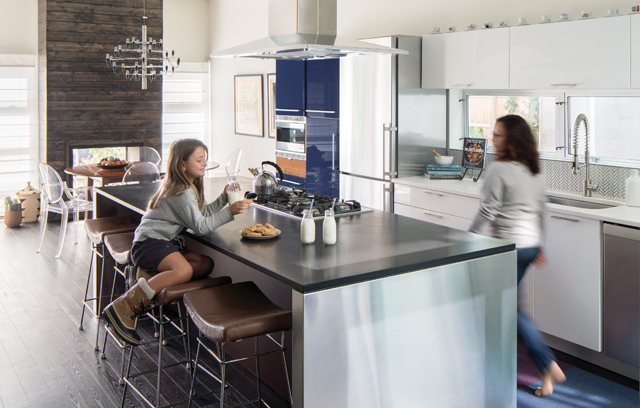 Kitchen: The kitchen’s sleek white-gloss cabinets and island (which is topped by black Caesarstone) are by European design company Berloni. 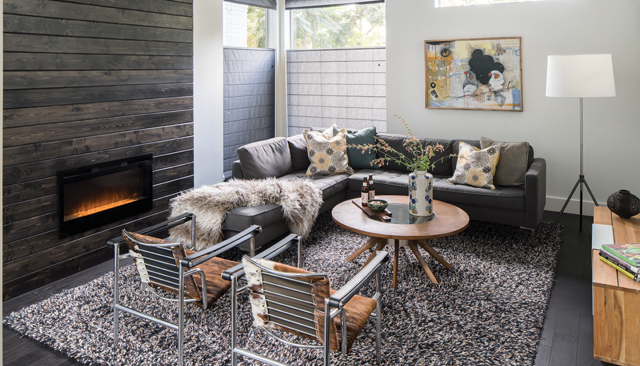 Living Room: The addition of an electric, floor-to-ceiling fireplace in the living room was as much about form as function: It not only balances the one in the den, but it also provides an additional heat source downstairs, where glass abounds. The textures of the LC1 cowhide chairs and a Kasthall rug boost the coziness of this favorite family space. 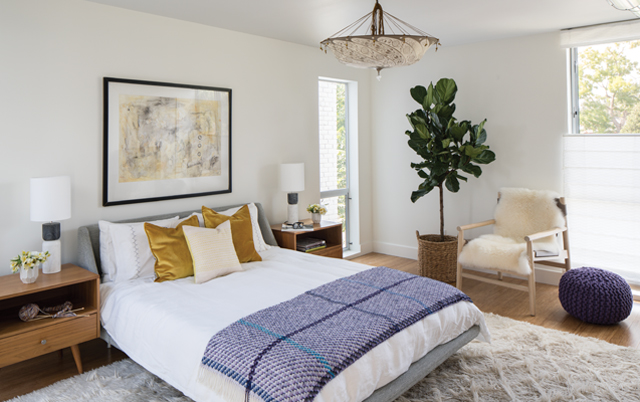 Inspired by a Paola Navone design in Dwell magazine, the Lubberts first considered replacing the concrete floors with hexagonal wood-and-tile versions, but eventually, they opted for a budget-friendlier synthetic white oak floor with an ebony finish. They ditched two massive pendant lights in the open dining space in favor of a recessed light on one side of the room and a Flos chandelier over the dining room table on the other. Then Moore stripped off the black tiles and dressed the fireplace in floor-to-ceiling pine stained with a Spanish oak finish. To add warmth to the space, Moore suggested balancing the den fireplace with another in the front room—a move that Jeff initially resisted, given the room’s relatively small size. Moore brought down two cowhide chairs from the Lubberts’ upstairs master bedroom to give the room added coziness and moved the Blu Dot Paramount couch so it faced toward the rest of the house.

In the kitchen, Monica and Moore debated backsplash tiles. Moore wanted a clean slab, while Monica fell in love with a small geometric tile design from Ann Sacks. Despite her designer’s doubts, Monica triumphed, and today, Moore admits she’s been won over. “I thought it was going to be too busy,” she says. “I wanted something that read cleanly, but it turned out to be pretty neutral.” Moore found a creative solution for Monica’s other must-fix: the area under the stairs that, until the redesign, served mostly as a home for massive dust bunnies and as a crawl space for the Lubberts’ then-two-year-old daughter, Malena. Moore filled the nook with walnut and white shelving, providing both extra storage space and less cleanup work. The design introduced what would become a theme throughout the rest of the house: triangles. You’ll find colorful versions painted on Malena’s bedroom walls upstairs and a collage of them at the end of the upstairs hallway.

What started as a simple warm-up job downstairs has become an ongoing, room-by-room transformation. The master bedroom recently got an upgrade, including a new rug (with triangles’ geometric cousins, diamonds); the Lubberts are eyeing the rooftop space next. (Monica is lobbying for a bocce ball setup.) Like in the Five Points neighborhood itself, every change begets another, transforming the whole into a modern space still connected to the past. And as for those friends who thought the Lubberts might be crazy to leave Jefferson Park for Five Points? Says Monica: “Now they all wish they lived here.” 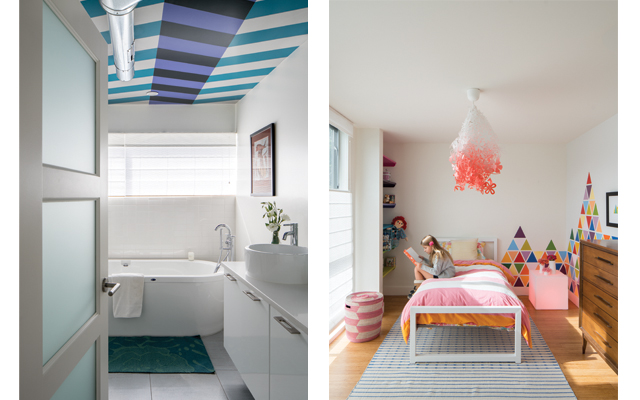 Bathroom: A colorful geometric paint design on the ceiling makes the guest bathroom less austere. Daughter’s room: The triangle theme continues in Malena’s bedroom, where Monica spent days painstakingly detailing the colorful shapes on the wall while she was pregnant with her son, Leo. Toward the end of the project, she called in the pros to finish it.