Imagine if you could know weeks or even months out what ski areas in Colorado would get the best snow at any point in time. You’d be able to plan an epic weekend ski trip, determine which resort is ideal for a holiday getaway, or even choose what ski pass to buy.

Those days aren’t quite here yet, but meteorologist Joel Gratz, founder of the snow-forecast website Open Snow, is getting closer. When Gratz launched Open Snow in 2008 (then as an email newsletter), it was the only service offering highly specific and detailed near-term forecasts, narrowed down to individual ski areas. Now, Gratz is expanding his focus with a first-ever attempt to provide seasonal forecasts in Colorado, ski area-by-ski area.

“We are trying to get an accurate answer to a question a lot of people ask in the early season,” Gratz says. “They want to know what areas of the country or even the state will get the most snow. In this process, ideally, we’ll be able to isolate weeks or whole months where snow will fall in a particular area.”

The biggest upfront challenge for this feat was collecting data. “The [historical] snowpack data from mountain weather stations and Snotel exist, but no one has ever pulled it together or quality-controlled it,” Gratz says. Snotel, short for Snow Telemetry, is a network of more than 850 remote snowpack sensors embedded on mountainsides across Colorado and other western states. They transmit data all season, on metrics like snowpack and water content, wirelessly via VHF (very high frequency) radio signals and are a key system relied on by everyone from avalanche forecasters to municipal water authorities.

Gratz then needed to compare that historic data against variations in ocean temperature each fall and winter, which is the biggest influencer on seasonal snowfall trends in the western U.S. “Using ocean temperatures to predict seasonal forecasts is a known technique,” he says. “The difference is no one is looking at snow at specific ski areas or regions; it’s very broad.”

Gratz worked with Amato Evan, an atmospheric scientist and professor at the Scripps Institute of Oceanography at University of California, San Diego, to develop a model that correlates these two data sets. It took a year for Evan to build the model, says Gratz, which gave him insight into the way fluctuations in ocean temperature might affect our ski season. Then, Gratz applied his highly developed knowledge garnered from years of forecasting storms to interpret how the effect might vary from mountain to mountain.

“There are a lot of variations due to wind direction,” he says. The topography of Colorado’s mountains, where the Continental Divide can block or stall weather fronts, means certain areas are favored by certain storm tracks; think of how the Front Range gets hammered in upslope storms—where air moves from low elevations to higher elevations as it travels toward the mountains—while areas over the Divide only get a dusting.

Open Snow’s seasonal forecasts are expressed by a range of total snowfall, as a percentage of the long-term average. Given that this is an El Niño year, when the warm western Pacific Ocean current provides an outsize effect on U.S. snowfall patterns, favoring Colorado’s southern mountains, it’s probably not surprising that our southern ski areas are predicted to get higher seasonal totals than any other area.

But Open Snow tries to put a more specific figure on the outlook, mountain by mountain. Gratz’s forecast calls for Monarch Mountain Resort to get a seasonal snowfall from 90 to 125 percent of normal, while northern resort Steamboat is looking at a slightly below-average year with 70 to 105 percent of normal snowfall. That’s not to say that Steamboat will be dry—it most definitely won’t be—but it does suggest that if you’re hedging bets on powder days this winter, it might be better to travel south. 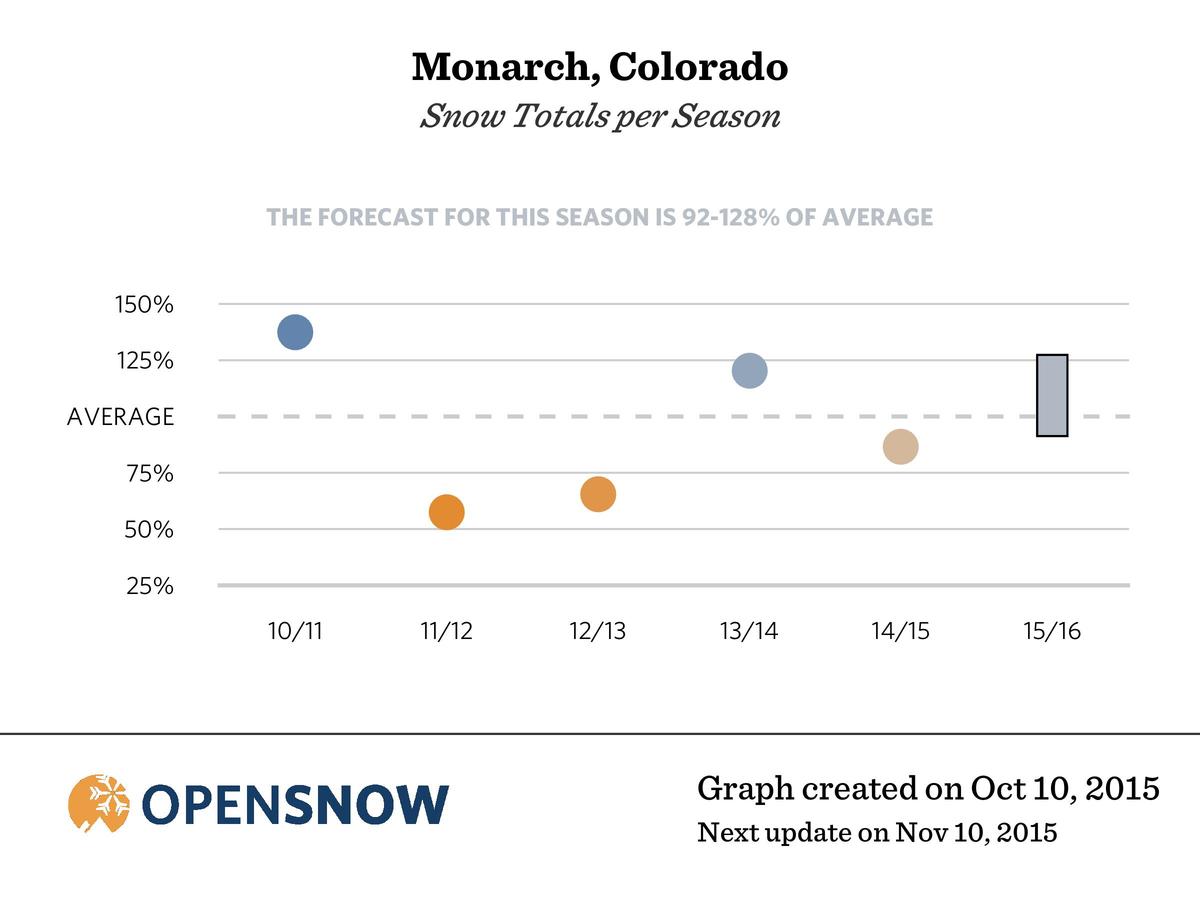 A graph from Open Snow that shows the 2015–16 forecast for Monarch Mountain Resort.

Being a forecaster is a little like being a quarterback; you have to have a short memory for the last series, whether good or bad. But Gratz tracks his accuracy and regularly publishes his findings, and pledges to do the same with his seasonal forecasts, in the hope of improving them over time.

Because this winter is expected to bring one of the strongest El Niño phenomena on record, it’s unclear how accurate Gratz’s current or subsequent forecasts will be. “The science isn’t quite there yet, but this is step one,” he says, noting that even 15 years ago the accuracy of a five- to seven-day forecast was suspect, and has improved dramatically since. But Gratz is hopeful that the data will be valuable—this season and in coming years.

“We’d love to eventually break down season forecasts into even monthly forecasts,” he says. “Ultimately, we want to be a resource for people who are planning ski trips six months out, three months out, or even next week.”