Completing a series of works for a gallery exhibition is a tough, time-consuming job for any artist. Now imagine five artists—all working in different mediums—attempting to show together and create a cohesive experience for viewers. Sounds nearly impossible. 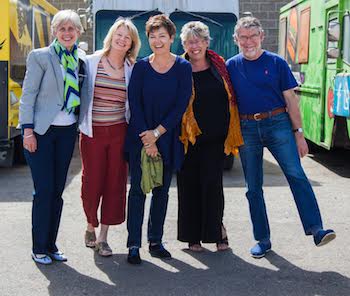 But that’s the challenge five Colorado creatives—collectively called To Expand Artists—tasked themselves with when they joined together four years ago for an inaugural exhibit at the Madden Museum of Art in Greenwood Village. “What drew us together was the fact that we all work in different mediums,” says local fiber artist Carol Ann Waugh, who also owns aBuzz Gallery in RiNo. “We just like to hang out and be creative.” Beyond Waugh (second from right), the group includes (from left) Janice McDonald (collage), Mary Williams (wood sculpture, like the “Ski Snowflake” below), Victoria Eubanks (encaustics), and Ken Elliott (oil and pastel painting).

The group’s work is currently on view in Running Dialogue, which weaves through the lobby and corridors of Lone Tree Arts Center (through January 5, 2016), the recent recipient of two Mayor’s Awards for Excellence in Arts & Culture. It’s a combination of original and previously created works. “Individually, they’re beautiful, and collectively you just sort of step back and say, ‘That has tremendous impact,'” says LTAC executive director Lisa Rigsby Peterson. 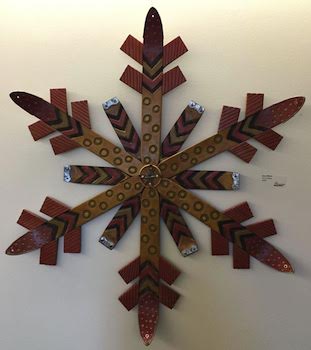 Rather than hanging their works on individual walls, as the collective has done in the past, Running Dialogue mixes and matches the pieces. “We see ourselves as always dialoguing with each other,” Waugh says. “We hung the work so each piece would talk to another piece made by another artist—it’s what ‘running dialogue’ is all about.”

The highlight, though, is a single piece of artwork near the entrance, for which all five artists created a two-foot-by-two-foot panel. Even with their different mediums and approach to art, the combination somehow manages the unified feel that any successful piece—and successful artist collective—requires.

Check out the 72 works before or after a holiday production at the Arts Center, or stop in during normal business hours (check the LTAC website for details). You can also see a semi-permanent selection of the group’s art near the escalators on the way to security at Denver International Airport.

—All photos courtesy of Marianne Pestana