Coloradans love two things: working out and drinking beer. Well, whiskey too. And wine. OK—we love drinking booze and working out. But to get the most out of the latter, you’d better know how to handle the former. That’s why we’ve assembled a comprehensive guide to how the mind, body, and spirit(s) interact in the Centennial State. Because what’s the point of crossing off all 54 fourteeners or knocking out another marathon if we can’t toast the triumph?

How your body responds to booze

Most people’s understanding of spirits is simple: You swallow them. But that’s not nearly detailed enough for the Fitbit era, when every step must be monitored and recorded. Here, the details of what’s happening on the other side of your sip. 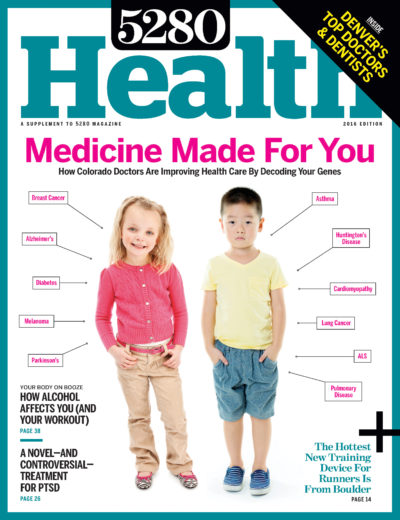 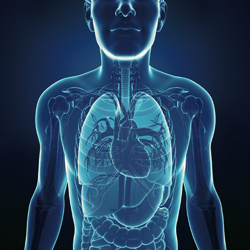 Alcohol is a dietary nutrient, like protein, fat, and carbohydrates—which means having a beer (or a glass of wine, or an old fashioned) is the same as eating, says Dr. Daniel Bessesen, chief of endocrinology at Denver Health Medical Center. But while fat, carbs, and protein can be stored, the body has no place to stash alcohol. So it gets precedence for metabolism, and while protein, fat, and carbs wait their turns, they are absorbed into your spare tire. Or sausage fingers. Or thunder thighs. In short, too much booze means there’s more of you to work off later.

The prime victim of drinking is the liver—the organ that has to screen the shot of tequila you just couldn’t resist at Pinche Tacos last night. On average, a liver can metabolize an ounce of liquor (a standard drink) per hour. More than that and booze starts backing up—which explains why your blood alcohol content reads “Coors Light” after a few rounds of beer pong.

Another terrible byproduct of imbibing too much is acetaldehyde, an organic compound that isn’t typically a problem because the body flips it into carbon dioxide and water in short order. But when your system is overrun by booze, acetaldehyde buildup leads to alcohol-flush syndrome—red, sweaty, blotchy face. That’s a look even beer goggles can’t camouflage.

Middle-aged people who have seven drinks a week experience fewer incidents of heart failure than abstainers—with men benefiting more than women. (How’s that for gender inequality?) One theory as to why: Moderate consumption of alcohol cleans your bloodstream by ferrying cholesterol and certain fats to your liver, where they are bounced from your body.

You hear it all the time: Eating right isn’t about abstaining; it’s about moderating. Failing that, it’s about working hard enough to burn off all those delicious things you couldn’t resist, like Colorado-made craft beer and wine. Here are some workouts that make resisting unnecessary.

<— Back to the Table of Contents

Professional ultrarunner Sage Canaday of Boulder on why his training routine includes an IPA or two. 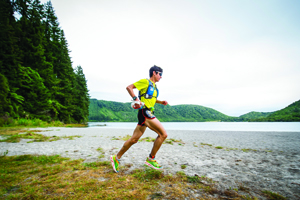 “For me, having a drink is about mindset. I have at least one beer, maybe two, at dinner most nights. It doesn’t matter if I have a hard workout the next day or an ultramarathon. It’s become one of my traditions, a ritual, because it puts me in a more relaxed state.”

“Avery Brewing Company sponsors me, and I’ve been known to fly with a few bottles in my suitcase. I took some to France in August for the Tour du Mont Blanc and some to New Zealand last year. Mainly to share with people—but I drink it, too. I basically get free beer in exchange for plugging the brand. So I’m pretty lucky.”

“I was doing a race in Salt Lake City this year, the Speedgoat 50K. It was pretty hot, and I was thirsty. The last 10 miles I just kept imagining how nice it was going to be to cross the finish line, sit down in a chair, and crack open a cold IPA. I think diversions are good. Especially when you’re working through fatigue or you’re trying to mentally break down all the miles you have left to run. It’s good to have little cues in your head, like, Oh, this will be one of my rewards. And a serious workout certainly makes the beer taste better.”

“I’ve definitely had a few too many before a training workout, mainly when I was in college. I mean, you run seven days a week—not all are difficult workouts but still, like, 10 miles—and there are those college parties. Dehydration becomes an issue. Maybe you have a splitting headache. I’ve only done that a handful of times. It’s something I don’t do as a professional athlete. I’ll party after a race. I’m not running anywhere after an ultramarathon anyway.”

Gain some inner peace (and a slight buzz) at these brewery-based yoga classes. 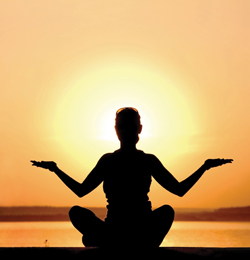 Denelle Numis and Sara Randall lead hourlong classes for all levels of yogis in this spare but hip brewery just off East Colfax Avenue every Sunday at 10:30 a.m.

Instructor Jenna Bee encourages her students to stick around and mingle after her regular Tuesday 6 p.m. class at the Boulder brewery.

If you like diversity in your post-pose brew, try Poses and Pints, which hosts classes at rotating local breweries, including Joyride, Spangalang, and Zephyr.

Crunching the numbers—the good, the bad, and the grisly—on Coloradans and booze. 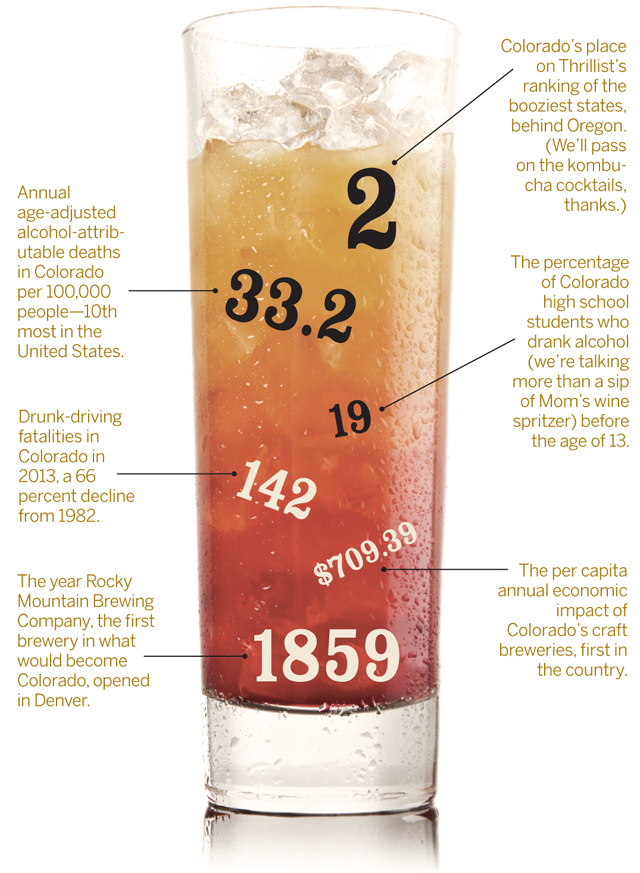 The Anatomy of a Hangover 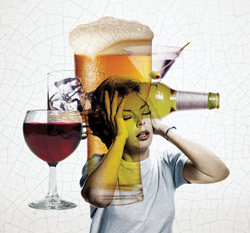 Last night is foggy: You met some friends to watch the Broncos game, but Peyton threw some picks, Titan IPA was on special, and then…? The next thing you know, you’re waking up and noticing that your tongue has turned into sandpaper. Then comes the headache—any slight motion is an ice pick to the brain. But you’re going to have to move (and fast) if your stomach keeps rising. While you might have a vague idea of why you feel like you’ve got the bubonic plague, we’ve enlisted the help of Dr. Erik Adler—an emergency room physician at North Colorado Medical Center in Greeley and CEO and owner of Divine Hydration Therapies, which delivers IV fluids to dehydrated (and, yes, hungover) patients’ front doors—to explain your situation in scientific terms.

Dehydration A hormone in the pituitary gland called vasopressin is responsible for telling your kidneys, “Hey, we’re a little low on water. Quit flushing it for a while.” Alcohol inhibits vasopressin, so kidneys open the floodgates. (You’ve just discovered the reason bathroom lines at bars are always so long.) Drinking just 250 milliliters of alcohol, about eight ounces, results in the loss of 800 to 1,000 milliliters of fluids.

Nausea A belly full of alcohol stimulates your stomach cells to create hydrochloric acid—which stings a bit. Your natural response is to get rid of the offending substance via the same route it came in.

Shakes You can’t get your coffee to your lips without scorching your lap because alcohol consists of a bunch of sugar, which forces the pancreas to make a bunch of insulin to metabolize it. The sugar burns off fast and the insulin hangs around—burning the glucose in your blood and creating a drop in blood sugar.

Can’t sleep Glutamate, a prevalent neurotransmitter in the body, is essential to memory and learning. Alcohol inhibits its production, so once those Fat Tires have cleared your system, the brain has to play catch-up. Unfortunately, the production of glutamate keeps you awake, meaning your hangover-induced, glutamate-rich environment will leave you tossing and turning in your own personal shame for hours.

The truths and myths behind hangover cures.

Coffee
Fiction: Sure, this rich-smelling brew might help your headache by tightening the alcohol-engorged blood vessels in your brain. But it’s also a stimulant, and stimulants keep you up and make you edgy. You’re better off going with ibuprofen.

Eggs and Bacon
Fact: The grease from the bacon coats your stomach, providing protection from nausea-inducing hydrochloric acid. And eggs contain a substance called cysteine, which is depleted when your liver breaks down alcohol toxins.

Bananas
Fact: Nature’s candy is chock-full of potassium, one of the many minerals that gets flushed by the kidneys when alcohol inhibits vasopressin.

Burnt toast
Fiction: Some people claim the carbon in the burnt portion of the bread filters the impurities coursing through your system. Those people are wrong. 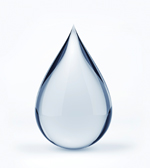 Divine hydration’s Hangover Package
Fact: Divine Hydration Therapies’ IV-delivered potion (see “After Party” at left) contains fluids for hydration; anti-inflammatory drugs; and nausea-fighting medicines as well as calcium, magnesium, and vitamins C and B to help you metabolize acetaldehyde. But you’ll pay for the relief: $120 a pop.

Juiced
A 2014 study showed that resveratrol, a health-boosting ingredient in red wine, improves connectivity between the hippocampus and the prefrontal cortex, therefore improving subjects’ memories. The bad news (or good, depending on your thirst): You’d need to down 400 glasses a day to match the intake measured by the experiment.

The Audacity of Booze
Liquid courage (enough to produce a Breath Alcohol Concentration of .08 to .09 percent) has been proven to boost bravery—according to a University of Michigan experiment—by reducing the amygdala’s (the part of the brain that manages fear) response to threats.

Identity Crisis
Chronic alcohol abuse damages your frontal lobe, where your personality and problem-solving skills reside. This isn’t the kind of “losing yourself” that’s fun.

Buzzkill
Remember that hangover headache we mentioned? It’s a result of booze expanding the blood vessels inside your brain. (Ouch.)

Walk The Line
The neurotransmitters glutamate and gamma-aminobutyric acid (GABA) help control the brain; the former tells brain cells to fire, while the latter does the opposite. But too much GABA inhibition due to alcohol affects the cerebellum, the part of your brain that handles motor skills. Yet another reason why you should download the Uber app. 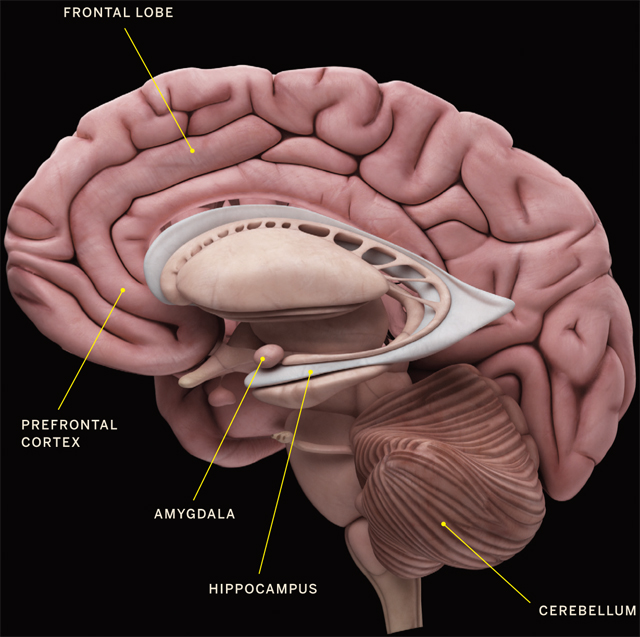 Has our infatuation with spirits gone to Coloradans’ livers?

Contrary to popular belief, alcohol abuse isn’t the only path to liver disease. When it comes to patients waiting for liver transplants, booze (12 percent of patients) ranks well behind hepatitis C (37 percent of patients) as the primary cause. In fact, alcohol abuse is about even with liver cancer and autoimmune diseases like primary biliary cirrhosis (a type of scarring that wears away at the liver’s bile ducts). Still, when you discover that alcohol-crazed Colorado, the 22nd most populous state, has the seventh-longest waitlist—more than 700 patients—for livers, you wonder: Is our devotion to craft brews, small-batch spirits, and robust Western Slope wines destroying our livers at a higher-than-normal rate?

Not quite, says Dr. Greg Everson, a hepatologist at University of Colorado Hospital (UCH): “Incidents of liver disease are about the same in Colorado.” So why the DMV-like wait? “It’s just the geography,” Everson says. “There’s Denver, and there’s not a whole lot else.” Wyoming, for example, doesn’t have a single transplant program. New Mexico only has one, for kidneys. Patients from these states have to go elsewhere for their livers—and a program as renowned as UCH’s (it was the first hospital to perform a liver transplant, in 1963, and in March 2015, it surpassed 2,000 total) looks pretty good. Plus, UCH is one of the few U.S. centers to perform liver transplants from live donors.

A person begins flirting with serious liver damage after imbibing 100 kilo-grams of alcohol during his lifetime. Are you on the right—or wrong—path? Here are your odds of developing cirrhosis (compared to a teetotaler) based on daily drinking habits: