There are plenty of reasons Patrick Roy is a household name in Colorado. Twenty seasons ago, the Quebec Nordiques became the Colorado Avalanche, and Denver, with Roy in goal, welcomed its first Stanley Cup—and first major pro sports championship. (Which is basically a unicorn among Denver’s very limited list of big wins.) It was the third of four Cups Roy would raise overhead during his career. In his rookie season with the Montreal Canadiens, Roy became the youngest player to ever win the Conn Smythe Trophy. There was the epic on-ice fight with Mike Vernon, and the one with Chris Osgood, and Roy’s distinctive butterfly goaltending style. Now, 12 years after his retirement, Roy is back behind the bench in his third season as the Avs’ head coach. Oh, and in his inaugural year in that role, he won the Jack Adams Award (read: NHL coach of the year). 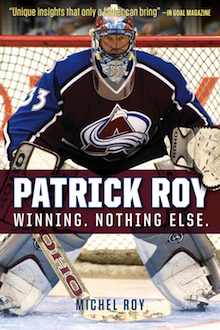 Roy’s accomplihsments are enough to fill a book—498 pages, to be exact.

The goalie’s father, Michel Roy, penned Patrick Roy: Winning, Nothing Else (Triumph Books, October 2015) in 2007. (Originally published in French—the family is from Quebec—the book was later released in English.) The elder Roy recently updated the tome’s introduction to include details about Patrick’s work as a coach, both in Quebec and Denver. “There is more to it than just a hockey story,” Michel told me as he sat in 5280‘s offices last week. “There’s a psychological aspect: how to become a winner, how to cope with stress, how to cope with children [pursuing athletics]. What I wanted to write about was Patrick Roy the goaltender and how he got into it, in every detail.”

Though Patrick was initially against a biography (he said no to his father just as he had to other requests), Michel said he convinced his son—”he accepted timidly”—by telling him it was time he gave back. His story, Michel insisted, could serve as an example to youngsters, whether they’re athletes or musicians or aspiring entrepreneurs. “Patrick is someone who, when he was seven or nine years old, was just a normal kid. He had no particular physical advantages. He was average height. Skinny. Not too strong,” Michel says. “What he has achieved, he has achieved through determination, hard work, and a passion for winning.” That’s a lesson other children can learn from, Michel says.

Michel—whose own father was a writer—spent two years researching and writing the biography, often working from 3 until 9 a.m. He read through dozens of newspaper archives and recorded interviews with Patrick and people integral to his career, including coaches and former teammates. As to how Michel managed to stay unbiased while writing the definitive narrative of one of the best goaltenders to ever live who also happens to be his son? “I hired a consultant, a friend,” Michel says. “I sent him every chapter as I told him, ‘If you feel I’m more father than biographer, let me know.’ And when I felt I should include a compliment, I used quotes from journalists [rather than my own words].” Patrick has seemed happy with the final product, Michel says—though he’s not sure his son has ever actually read the book.

So when did Michel know his son could truly turn hockey into a career? It wasn’t until 1986 when Patrick won his first Cup. “He had been on the losing side for so many years,” Michel says, referring to Patrick’s junior team years. “Because of some amazing circumstances, during the playoffs, he became the [Canadiens] number one goalie. He won against all odds. That’s when I realized maybe he could make a career out of it.”

Though his legacy as an NHL coach is still being written, Patrick Roy the goalie will live forever in the record books. And his father’s words, for now, remain the only full story about how he got there.

Stay Tuned: Denver hosts its first Stadium Series game on Saturday, February 27, when the Avs take on the Detroit Red Wings at Coors Field. The night before, catch the alumni game where big names from both teams—Roy included—will take to the ice.