These aren’t any old art or film classrooms, though. Two galleries anchor the lobby, showcasing alternating exhibits of professional and student work, which also line the hallways of the three-story facility. (One young painter from Valor recently had a piece on view during a student show at the Museum of Contemporary Art Denver.) Songwriting students are taught by Marty Magehee, a Grammy-nominated musician, and have access to a state-of-the-art recording studio. The school hopes to attract professional artists to record there, allowing an experiential learning process for students. Burgeoning thespians are learning the art of stage flying from Flying By Foy, a company that has trained Broadway actors. Soon the school will put the finishing touches on a professional news broadcasting studio, control room included. And that’s just the beginning. 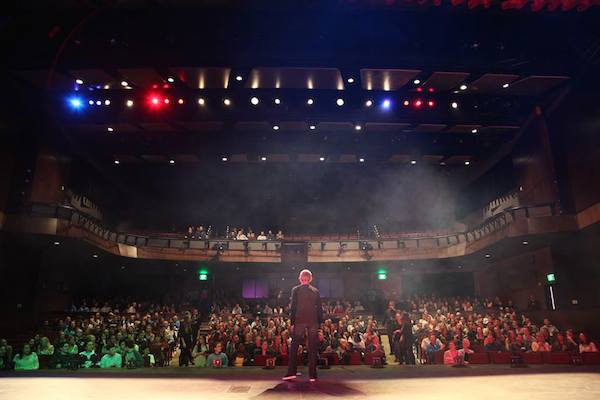 The new 750-seat performance hall inside the Valor Center

According to Arie Ringnalda, director of Valor arts and media, 87 percent of Valor Christian students are involved in the arts. Thanks to 10 anonymous key donors (plus a broad base of other contributors), the Valor Center offers them an attractive, progressive space to learn, experiment, and grow. The new venue also coincides with the launch of Colorado’s first high school arts conservatory, an individualized “college and career arts and media prepatory program.”

Ringnalda says the plan is to continue to grow the school’s offerings (jewelry is being added the program next year). “The long-term vision is to host speaker series, political debates [and more],” he says. “We want to maximize [the space] for our community and for our kids.” The public is welcome for any student productions.

At a time where arts education is often overlooked in favor of testing-focused curriculum, the Valor Center stands, quite literally, as a hopeful beacon.