Ben Roy: The Internet has given people a vehicle to see us. But Denver has always been a pedigree place. There have always been great comics who came out of the city, from Rick Kerns to Roger Rittenhouse to Troy Baxley.
Andrew Orvedahl: You go down to Comedy Works, you get to see the best stand-up comedians. And that informs your comedy when you’re just a baby comedian.
Adam Cayton-Holland: We got lucky because we all started at Comedy Works, which any comic will tell you is a top-five comedy club in the country. But the rise of alternative comedy, podcasts, and comedy outside of clubs dovetailed nicely with our ascension. 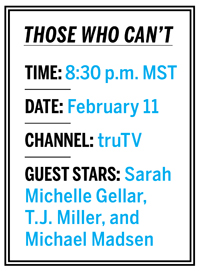 ACH: The cavelike nature of Comedy Works’ downtown club is perfect. You want everyone to bond around this communal experience. I don’t know how comfortable it is for the audience, but for the comic it’s exactly what you want.
AO: I think it works that it’s uncomfortable. It forces people to be awake and active. If they were lounging back, they’d just fall asleep. They’re all drunk anyway.
BR: I mean, how do you get people to confess their sins? You put them in a stress posture.
AO: Is that what they do in a confessional? Is that how it works?
BR: I don’t know; I’ve never been in one. But I think that’s it.

Does Denver create a certain style of comedy?

AO: Denver has an aggressive style of comedy because there are no other cities around.
ACH: Especially when we started. There was the sense that you were howling into the void as loud as you could to get people to pay attention.
AO: That’s also the name of Adam’s memoir. Howling into the Void. Pick that up. Random House.

Do you feel any sort of responsibility to the Denver comedy scene?

ACH: To varying degrees. Illegal Pete’s and I started the High Plains Comedy Festival three years ago as a means of showcasing Denver.
AO: Anytime there’s an opportunity to give somebody we know a spot on Those Who Can’t, we’ll try. But it’s an uphill battle trying to sell someone from Denver to people in New York.
BR: Chris Charpentier, a local comic, has a cameo on Those Who Can’t.
AO: But I think Colorado needs to up its ante to attract more productions.
BR: With their film incentives, they’re trying. But it would be cool to see them spend a little more money to make it more enticing for big LA production companies.

Has getting your own sitcom—a comic’s dream—lived up to your expectations?

BR: [Erupts in laughter.]
ACH: Honestly, it’s one of those careful-what-you-wish-fors. We got into stand-up because we didn’t want a 9-to-5. Now we go to an office and work from 9 to 5 every day.
AO: There are 98 people standing around waiting for you to do your work. If you fuck it up, you’re delaying everyone’s workday. And what you’re doing is going to be shown to hundreds of thousands, millions, of people, who will then judge you.
ACH: And, by the way, you also wrote the material. But we’re keenly aware of how lucky we are. For years, people would ask us, “Why are you staying in Denver?” We, stubbornly, were like, “I don’t know; we think we’re on to something.” Then it all came together. People in Hollywood are like, “We plucked these diamonds out of the rough.” But we’ve been doing this for 12 years. People in LA just didn’t know about it.
AO: We’ve been working in the mines all this time. We’ve got black lung, all three of us!
BR: Coincidentally, Andrew’s novel is called This Diamond’s in the Mine.
AO: It’s called Diamonds in the Rough! You know that!

ACH: Yeah. Do you want a thousand dollars?