THE DRAWBACK: The ramen reaches for—but doesn’t quite achieve—greatness

Ramen restaurants inspire a fervent excitement that may only be matched by the enthusiasm of Southern barbecue hounds. The zeal has to do with the soulful nourishment of deeply flavorful broth and chewy noodles slurped in communion with other devotees, often in steamy rooms much smaller than old-timey soda shops. Ramenism, as we may call it, inspired the greatest food movie ever made, Tampopo, which has a scene in which a wise elder instructs a neophyte in the right way to approach a bowl, beginning with a gentle, thankful caress of the noodles with the tips of one’s chopsticks. I approach ramen joints in this spirit, seeking ecstasy. My wish for Osaka Ramen was that it be a new pilgrim’s destination on the ramenist map, like Motomachi Shokudo in Vancouver or the upstart Ivan Ramen in New York City, which is run by an American who earned his stripes in Tokyo, the center of the noodleverse.

Things start well at Osaka’s RiNo outlet on Walnut Street (there’s also a satellite shop in Cherry Creek). The Osaka logo of a pig and chicken sitting happily together in a noodle bowl, as if in a soothing bath, has a Japanese cuteness that avoids the auto-cannibalism meme in which beasts are shown gleefully sacrificing themselves to a food brand. The room’s high, narrow, semi-industrial space is fun: The concrete is warmed by a long, blue fresco of Godzilla presiding over a silhouetted city, presumably on the attack but possibly just looking for a righteous bowl. There are plenty of small tables, and for those who believe a counter is the only place for proper worship, look for tall chairs that face the cooks and the giant urns of broth. At lunchtime, in particular, the joint jumps.

The menu contains a range of small plates that I will describe in detail shortly, for it turns out they are among the best items Osaka offers. But the noodles come first. Some bowls lack conviction; some are quite good; none induce Tampopo-esque bliss. 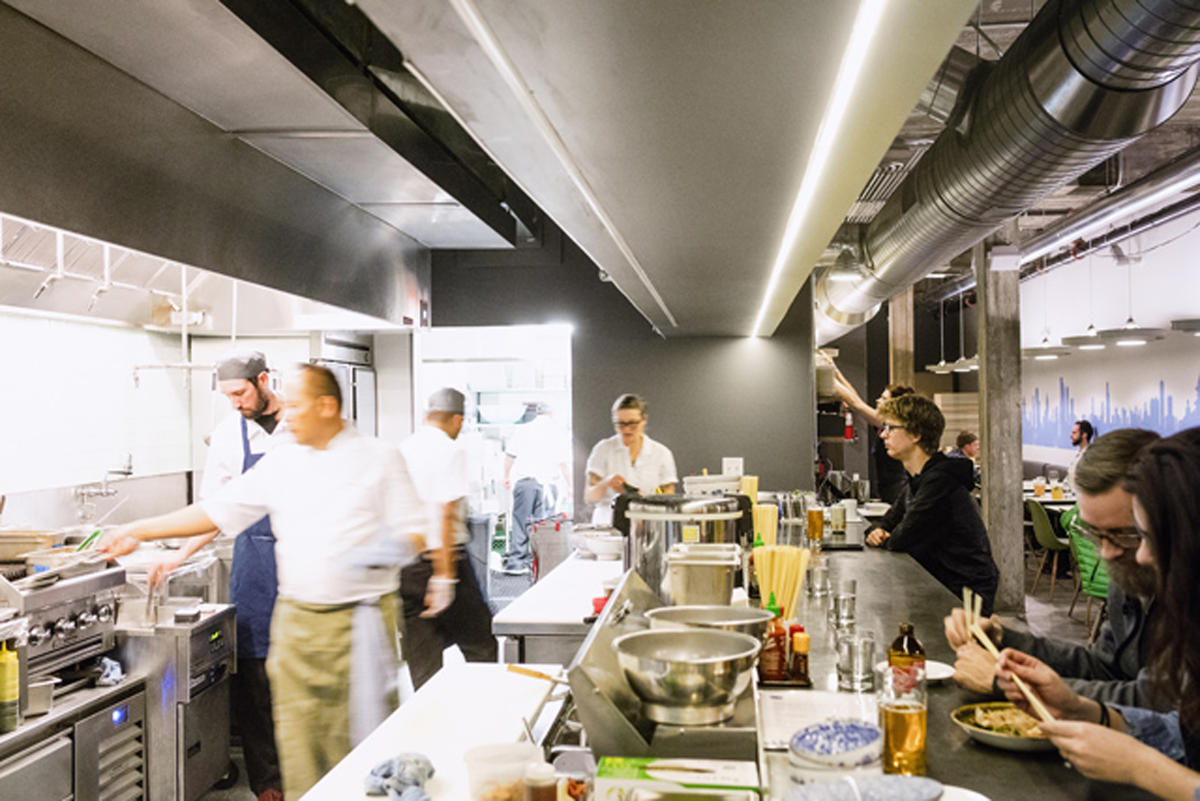 I started with the chicken version. The wavy noodles acquitted themselves well in terms of chewiness, but the rest of the bowl was disappointing. The broth needed deeper, rounder flavor. There was spinach, iron-rich and tannic, but in too large a heap. Two big sheets of nori papered the side of the bowl, but, like the spinach, felt slapdash. The braised chicken was a bit overdone. The “soft egg” (added to all ramen versions at Osaka) was too soft: nearly raw, quivering atop the not-quite-hot-enough broth like a wounded jellyfish. (I favor the texture and flavor of ajitsuke tamago, those soy-marinated soft-boiled eggs that have slightly set yolks and just-chewy whites.) The bowl just couldn’t get its act together.

The tonkotsu ramen was better; its broth had good pork-bone flavor and the milky, fatty consistency that comes with long simmering. There were slick bits of bamboo shoots and two slices of falling-apart pork belly, along with a small pile of pickled ginger. The dish needed a bit more richness, but I’d happily have it again.

Finally, in Cherry Creek, real ramen satisfaction: The spicy miso version had a cloudy, creamy broth that benefited from the tang of kimchi and miso and was served with blanched bean sprouts, spicy ground pork, black and white sesame seeds, and, yes, a trembling egg. Although I also liked the curry vegetable rendition, enriched with coconut milk, the spicy miso is what the rest of the bowls should aspire to.

It’s Osaka’s small plates that may best show off the wit and generosity of chef-owner Jeff Osaka. The tamago gohan is a large cake of rice with a crisp exterior, its crust having the same texture found at the bottom of a hot stone bowl of Korean bibimbap or a paella pan. The puck is slathered with a Worcestershire-like sauce and topped with kimchi and a soft egg. The panko-coated fried oysters, served in lettuce cups, are a briny, crunchy treat brightened by a yuzu-inflected tartar sauce. The Osaka Ramen salad, with shiso, mustard greens, and sesame dressing, was an Asian-inspired coleslaw. The chicken kara age showed a deft hand at the fryer: tender bites of poultry in tender crust, to be dipped in spicy mayo. Many of these small plates, which are generous and cost $3 to $7, are deals.

A couple of small plates did falter, however. Bacon-fried rice sounded fun but didn’t taste like much. I was excited about the onigiri with “house-made Spam” because the Spam and rice combo has been a favorite treat of mine since I bicycled around the Big Island of Hawaii a decade or so ago. But, it turns out, artisanalization does not improve whatever ironic charm Spam possesses.

Osaka matches the food with an appealing selection of sakes, ciders, beers, and cocktails. One night, with the oysters, I had a lovely, tall cylinder of sparkling sake, yuzu, and gin, which reminded me that yuzu, like kaffir lime, is a fantastically fragrant citrus worth hunting down. On my next visit, that well-balanced drink had been replaced by two that seemed to be in a fierce competition to set drinkers’ teeth on edge. The Sunrise—tequila, Aperol, orange, and simple syrup—was candy in a glass, and the Double Decc’er, made with citrus-clove liqueur and whiskey, both from Distillery 291, squandered two top-notch Colorado products. 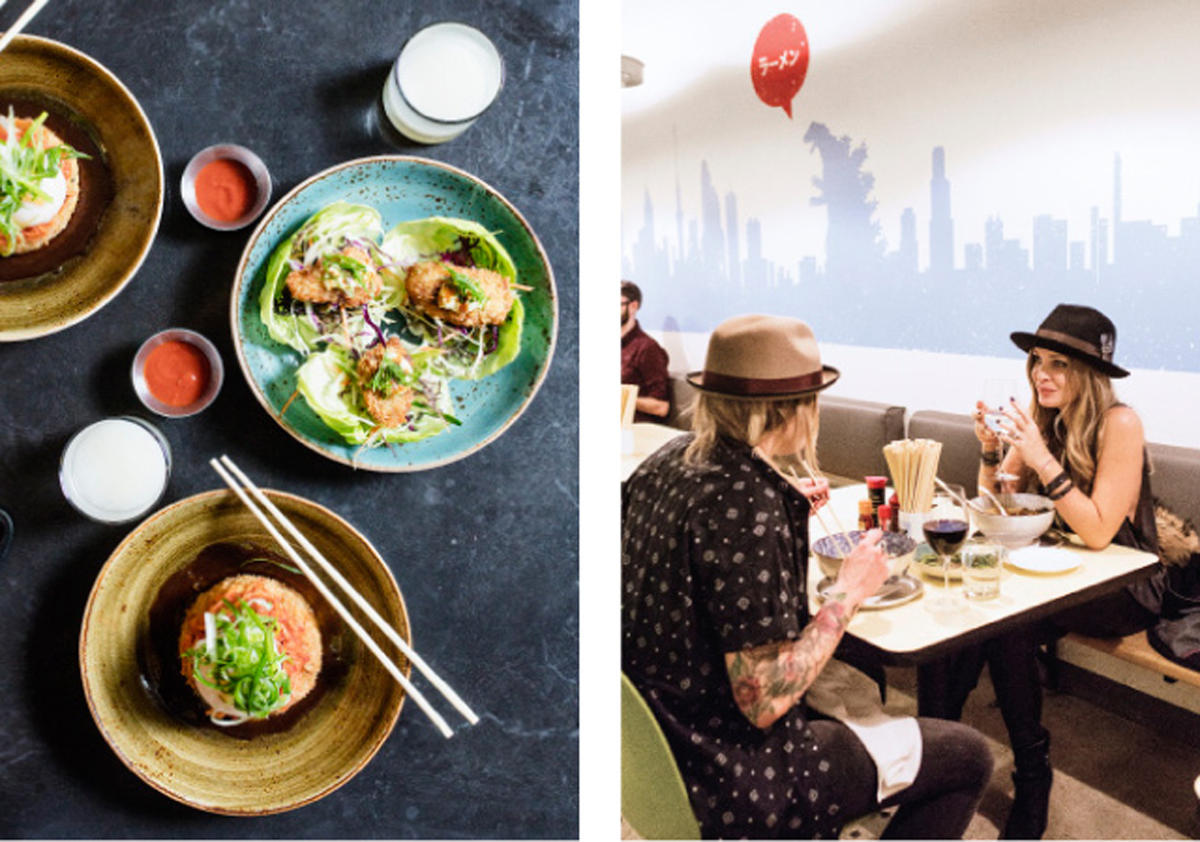 Above from left to right: Oysters in lettuce cups and tamago gohan; diners at the RiNo spot

Osaka’s menu is virtually the same at both locations, though I have to say the nondescript two-floor Cherry Creek space feels like an afterthought—it’s more of a casual lunch joint than a dinner destination. Service at both restaurants was attentive, but the Cherry Creek gang had an especially friendly approach that compensated for the mostly empty room on a Friday night.

We finished one dinner at the Cherry Creek location with a dessert that is the most spectacular ode to starchy goodness I’ve tasted west of the plum-dumpling Alps of Austria—something called My Wife’s Donuts. A mochi (glutinous rice paste) core is surrounded by doughnut batter, fried, and served with a mix of sugar and roasted soybean flour called kinako. You pull off hot, bite-size chunks and drag them through a weirdly inspired smear of salted butter. Then you grin at the hubris of these enormous dough balls, which, in their Zen-of-carbs way, could produce a ramenlike obsession of their own.