Forget the mountains. The most inspiring view in Denver right now may come courtesy of the towering cranes filling the skyline. Dynamic commercial projects are transforming the city into a denser, more functional, and (arguably) more compelling place to live. How? Let us introduce you to some of the new buildings next door (organized by neighborhood).

Build it, and the private sector will come. 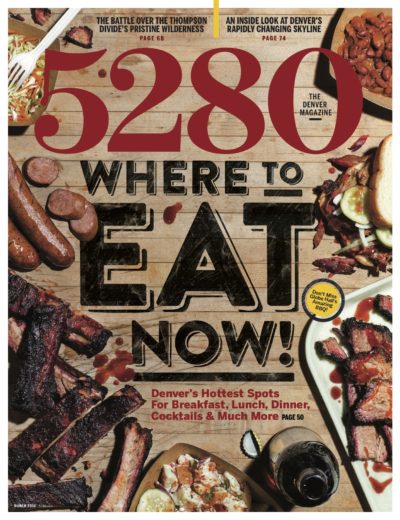 More than one expert we spoke with called the $500 million renovation of downtown’s Union Station a “once-in-a-generation” project. They were talking about the quality of the work, sure, but also about the fact that the long underused station presented an opportunity to create a city-defining landmark. Open for a little less than two years, the refurbished depot has a hotel, restaurants, bars, and retail outlets, not to mention a bustling transit center. The hope was the project would spur investment—and it has done just that. “The developments happening in LoDo prove an axiom that there needs to be a there there,” says Chris Frampton, one of the master developers of the Union Station project. With Union Station serving as a people magnet, developers are blending millions of square feet of cubicle-ready office space with residences, shops, eateries, and hotels—rather than constructing single-use towers that would leave our streets stagnant at night.

The A Block At Union Station

5280: What were you worried about when you began?

Mark Falcone: What was there not to worry about in 2008? The writing was on the wall that the market was in for a long struggle.

Chris Frampton: It was four years before anything got going again.

MF: My father has a great little saying he shared with me: “Son, for a good piece of real estate there is no problem that time can’t heal. If you don’t run out of money first.”

What was your goal for Union Station?

CF: I always talk about the virtuous cycle. Maybe you start with residential, maybe office, maybe retail. But one helps the other. CEOs want their employees to walk downstairs to 300 restaurants and bars and for them to have breakout sessions at baseball games.

Are you worried about developers ruining what you’ve started?

CF: We’re not because we know everyone who’s coming in. And it’s not just our project that’s wrapping up. The entire Union Station neighborhood will be under construction by December 2016.

What aspect of Union Station are you most pleased with?

MF: I’ll admit I didn’t want the interactive fountains. Frampton regularly sends me photos of kids in their wet, hanging diapers, which is what I was concerned about. But I think we got that right. I feel personally very proud of that.

Where empty lots and abandoned warehouses are reborn as hipster bait.

If Union Station is the product of public investment spurring private development, the River North neighborhood—or RiNo, its New York City–esque, super-hip nickname—is the opposite. “All the early, key catalytic infrastructure wasn’t there,” says Kyle Zeppelin of Denver-based Zeppelin Development, who finished his first RiNo project in 2007. The roads were crumbling; sidewalks, streetlights, and parking lots didn’t exist; and junk littered…well…most everything. However, the industrial area did possess a burgeoning, grassroots arts scene, proximity to other hip neighborhoods, and (underneath graffiti and grime) buildings that could inspire some really unique redevelopment. As a result, the projects driven by RiNo’s pioneering developers over the past decade—from Zeppelin’s artisan market, the Source, to Industry Denver, a new 153,000-square-foot facility with shared working space and restaurants—feel authentic because they pay homage to RiNo’s history and creative culture. Now the city is installing much-needed infrastructure, such as sidewalks, bike lanes, and streetlights, along Brighton Boulevard, RiNo’s main thoroughfare, and in doing so constructing a pathway for further commercial projects.

Our booming real estate scene might make the desperate days of 2010, when Denver was still slogging through the end of the Great Recession, seem like a distant nightmare. We ran the numbers on commercial real estate—then versus now.

$651.3 million: The estimated cost of construction materials and labor for commercial real estate built in 2014 in Denver, compared with $171.6 million in 2010

2.4 million: Square feet of office space under construction in Denver, compared with 540,000 square feet in 2010

Nestled just four miles outside Denver’s Central Business District, Cherry Creek’s trendy boutiques, chic residences, and upscale restaurants set the standard for local luxury. But it wasn’t until 1990—when Cherry Creek Shopping Center opened—that the urban enclave could lay claim to being the center of Denver retail. Having a sprawling and exclusive shopping center did not make the area immune to economic downturns and fickle consumer tastes; however, Cherry Creek has learned to rebound, and right now, that means crafting a curated urban village. “We want our residents to be able to live, work, shop, and eat without having to leave,” says Julie Underdahl, president and CEO of Cherry Creek North Business Improvement District. So, while the neighborhood has always been loaded with retail outlets and (expensive) single-family residential options, recent developments have focused on increasing multifamily residential options and building more hotel rooms. “Office and retail during the day, residential and restaurants at night,” says Ken Schroeppel, an urban planning instructor at the University of Colorado Denver. “That’s what makes for a 24-hour town.”

(Read about how Cherry Creek is addressing its parking problem)

The Best of the Rest

Choosing the most exciting new commercial developments in Denver is like selecting the best new craft breweries: Worthy places can get overlooked. That’s why we compiled this grid of 10 projects that deserve attention—but might reside outside of the Mile High City’s most coveted neighborhoods, lack advanced detail, or have far-off completion dates.

18th and Blake streets to 19th and Wazee streets

Steam On The Platte

The Wheatley At Five Points

Remember the 1980s, when downtown Denver had more empty office space than any other city in the country? Is that going to happen again?

No. Er…well…probably not. With Denver’s economy growing even faster than its skyline, supply for office space has a ways to go before it catches up with demand. “The office vacancy rate in Denver is under 10 percent,” says Patty Silverstein, chief consulting economist for the Denver Metro Chamber of Commerce. “And most of the projects going up have significant amounts of pre-leasing.” Which is good. With tenants already in place for most commercial developments, there’s little chance of office buildings standing vacant (and developers going bankrupt). Silverstein’s ever-so-slight hedge comes from the other side of the construction business: residential. “There is concern,” Silverstein says, “that housing prices are growing so rapidly that people who’d like to move here can no longer do so.” That could put a strain on employers (who have to offer higher salaries to cover their employees’ costs of living) and/or simply curtail the mass migration into the Mile High City, meaning all those shiny new offices could eventually have a shortage of bodies to fill them. —Sarah Cahalan