Four artists walk into a museum. One creates video and sculpture; the second is a photographer; the third focuses on large-scale drawings; and the fourth is interested in installation and photo-based work. No, this motley crew isn’t the basis for some cliché joke. Rather, they comprise the diverse lineup for MCA Denver‘s winter exhibitions—and two of them (the latter two, if you’re curious) live and work in Denver.

Lanny DeVuono‘s graphite drawings on large, square canvases are simultaneously surreal and recognizable. Inspired by the recent privatization of space exploration (think Virgin Galactic and Mars One), DeVuono began thinking about the colonization of other areas—and the United States’ tempestuous history with colonization. She crafted eight works (one of which is pictured above) to hang in the MCA’s downstairs gallery. Icebergs, rocks, a cracked landscape—each piece uses familiar imagery and a subdued palette to freely imagine these other worlds, some with a sense of beauty and others depicting isolation and absence (of people, of water). “We describe what we don’t know with what we do,” DeVuono says, adding that the arid landscapes and extreme weather conditions scientists mention when describing other planets are also common themes closer to home. Stand near the work, and the texture DeVuono, an associate professor at the University of Colorado Denver, achieves from “carving” into the cloth comes alive; step farther away and the landscape, as it would in real life, alters.

When explorers returned home after visiting the New World, they’d relay what they saw to others, who would then paint or draw or otherwise represent a landscape they’d never seen. DeVuono’s work is reminiscent of that tradition, commenting on the inherent fiction in depicting the unknown. “There’s a ridiculousness in trying to encapsulate what’s infinite,” she says. By leaving her canvases unframed, she says, you “realize immediately it’s an artist’s hand.” 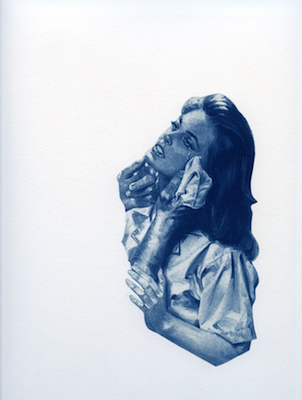 In her first solo museum show, Laura Shill (who received her MFA from the University of Colorado at Boulder) showcases her artistic range. Phantom Touch extends across two upstairs galleries. One room features a soft installation that overtakes the space—and its 18-foot ceiling—with close to 900 tubes, all in hues of pink, crafted from reclaimed materials. It’s tactile and inviting, though visitors will likely wonder if they can touch and interact with it (answer: yes, please). “I’m interested in creating private spaces within a more public space,” Shill says. The silky work achieves that goal through its sheer size: It softens the acoustics and makes it easy to become encompassed within the piece.

Once visitors peel themselves away, they’ll find something entirely different in the second gallery: Here, Shill shares three separate series of photo-based work, all of which use appropriated imagery. Absent Lovers (an image from this is pictured at right) explores the sexist power dynamics inherent in Harlequin romance novel covers by removing either the man or the woman. Untitled Veil features photographs of still life setups Shill created and photographed. And Hands of Glory isolates hands from Hustler magazine spreads. Shill, 35, calls her work “collage by subtraction.” By changing the context, the intended meaning behind the imagery is lost and a new understanding emerges. Though the two galleries may appear disparate, there are clear themes running through Shill’s pieces; uncovering them is part of the fun.

MCA Denver’s four winter exhibitions—the other two artists are Brian Bress and Arne Svenson—open on February 20. General admission is $8 for adults (nonmembers). An opening celebration is planned for Friday, February 19; tickets are required for the patron preview (6 to 8 p.m., $15), and an RSVP is needed for the main event (8 to 10 p.m., 10 cents at the door).