THE DRAWBACK: Uneven kitchen; food presentation can be sloppy

“Imagine your local watering hole,” Rebel Restaurant’s website reads, “but on hipster steroids.” A horrifying thought, that, evoking mustache wax and postgraduate mixology lectures. Fortunately, the folks at Rebel are not really hipsters at all, but hale fellas who belong to what I call the Bro-Gonzo school of North American cooking. This movement is led by people like Martin Picard of Au Pied de Cochon (foie gras poutine) in Montréal, Danny Bowien of Mission Chinese Food (kung pao pastrami) in San Francisco and New York City, and Kevin Gillespie of Gunshow (beef Wellington, hawked from dim sum carts by pitchmen cooks) in Atlanta. The Bro-Gonzo style favors communal seating, a tailgate vibe, a haphazard marriage of culinary influences, and—in some cases—indifference about the niceties of food presentation. I don’t mean to say that chef-owners Dan Lasiy and Bo Porytko of Rebel are already in the same class as those media-star chefs, but the approach is similar, as are the rewards.

Rebel’s plain brick building, plunked on a parking lot at the corner of Wynkoop Street and 38th Avenue among mostly industrial and warehouse surroundings, looks like a dubious roadhouse or biker hangout—until you spy the mural on one exterior wall, which has a festive Day of the Dead look. That painting suggests there might be fun inside.

There is. On busy nights, the joint has a genial energy that reminded me of a New Orleans neighborhood hangout. Wander in, take a seat at the long copper bar that runs down one side of the shoebox room, order an Evil Twin Brewing Molotov Lite Imperial IPA, and ask for a menu, which is printed on fluorescent home-printer paper and includes images of a human skull and a sprawling octopus. The staff is dressed as if to throw a dinner at home for buddies, and the cooks sometimes emerge from the kitchen to deliver food themselves. 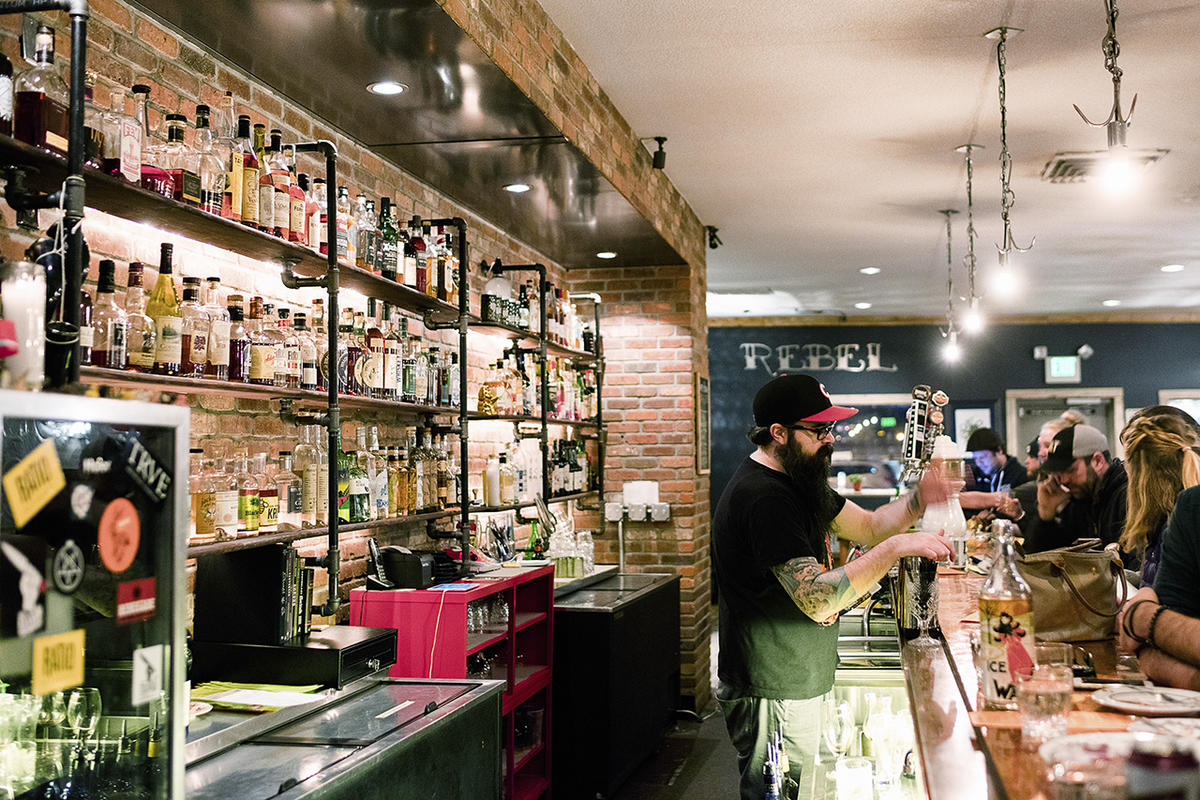 The menu jackrabbits all over the culinary map. Influences stretch from Ukraine (where both owners have roots) to Mexico, and from Louisiana, India, and Japan to whatever fancy place would serve a dish called Study of the Turnip. Misfires occur, but when a dish works, it will surprise and satisfy you in a manner that less gung-ho places seldom achieve.

The carrot enchilada, for example, was brilliant. A charred tortilla, redolent of masa, was wrapped around carrot purée and buried under a wad of “pulled” spaghetti squash, painted with a lurid “beet mole,” topped with a yogurt–queso fresco mix, crowned by a cilantro pistou, and garnished with thinly sliced radish. Like many Rebel dishes, it looked like a hot mess, but each bite resolved into an earthy, spicy, rich, garlicky, and sweet delight.

Another winner: the two-pound Duroc pork chop, which, the night I ordered it, was plattered with perfectly blistered green beans, more of that pistou, and an unnecessary pat of chorizo butter. The assembly sat on a shallow pool of sauce that looked like a milk gravy but turned out to be a toasted sesame paste, the nuttiness and faint grit of which tied the whole dish together. Aside from the fact that the chop was considerably smaller than two pounds and arrived 30 minutes late, this was a masterful creation.

The Rebel menu has many Southern touches: blackened frog’s legs, fried oysters on white bread in the Nashville hot-chicken style (drenched in hot sauce), and a stack of molasses cookies with apple butter for dessert. Southern claims demand deep-fryer bona fides, which Rebel’s boudin balls established with the first bite. They equaled any I’d had in boudin country for inspired, nongreasy crispitude. Inside, an almost creamy mix of pork, rice, and seasonings; outside, sublime crunch. They were served on a lively saltine aïoli with giardiniera. The only thing missing was the pork-liver bass notes that the best boudin possesses—which is odd, as Rebel parades its offal enthusiasms.

Intriguingly, for a restaurant that serves animal heads and a Pig Part of the Day, Rebel dotes on its vegetables. A sweetly roasted boat of delicata squash, for example, was moored on a beach of cauliflower purée and stuffed with a mushroom duxelles. The dish had the visual appeal of prison food but was prepared with a flavor precision, almost a daintiness, that suggests the kitchen favors old-school technique as much as any rebel cause. Escoffier would approve of the old-timey mushroom mince, and the cauliflower purée had an ethereal consistency that evoked Thomas Keller’s beloved Vitamix. Like the carrot enchilada, it simply worked.

Unexpected, too, are the whimsical touches of the rectangular space, which you take in as the meal progresses. The walls are adorned with white stamped tin, daubed here and there with lime and fuchsia paint. From the edge of the copper bar jut brass lion heads that might have been purloined from a British club. Food is served on charming mix-and-match china that suggests someone shares Grandma’s tastes and raided her attic. It’s as if these bros go home and study cookbooks and Pinterest feeds while shooting mezcal in floral-patterned nightgowns.

Before I get to the misfires, a few other wins that will have me back: plates of housemade pickles, different on three occasions, my favorites being the soy-rich daikon strips and the spicy cauliflower; a pierogi stuffed with finely whipped potatoes; and fried quail on a savory porridge of farro, oats, and other whole grains. The porridge was drizzled with an impeccable, sticky reduction sauce—further flashes of French technique—that our server said was derived from the stock in which the pigs’ heads were boiled. The same rich sauce draped a pork crépinette served with roasted carrots, potato purée, and a flourish of pear and herbs. That dish, nicely assembled, was bistro bliss.

Most of my complaints came from our second meal, when the restaurant was barely a quarter full and the kitchen duties, I suspect, had been deputized. Blackened frog’s legs were clobbered by spice, making it impossible to tell if they tasted like chicken or fish, despite the fact that the huge, Frankenphibian legs were loaded with meat. A potato rösti dish with fried egg, red cabbage, mushrooms, and a huge smear of mustard was tasty but staggeringly oily. Green-curried snails, though tender and abundant—more than a dozen in one bowl—came buried in a bland chickpea purée and with a feeble curry sauce. A blueberry goat cheese pierogi was good on the palate but a visual horror: purple-splotched and topped by an unfathomable green powder. I don’t mind the lumberjack aesthetic, but this looked like it had been assembled by H.P. Lovecraft.

On our third visit we arrived excited to order Rebel’s pig’s head, only to find that it was sold out. Our bartender commiserated, explaining that the kitchen only had three in stock that evening and that it’s better to call ahead to secure your cleaved skull. In one corner of the room, a boisterous group had gathered to celebrate the birthday of a young woman who was wearing a Viking helmet. I figured this was the crew that had cornered the heads. The Viking denied it, however, looking disappointed. My wife was frankly relieved to order the chop instead, with its delicious sesame purée.

I sipped a Genavieve cocktail: CapRock gin, L’Afrique red vermouth from Oregon, and Leopold Bros.’ Rocky Mountain Blackberry Liqueur. It was a sweet, bitter, balanced concoction that primed the appetite for whatever craziness would emerge next from the kitchen. As I sipped, I decided I would certainly return to Rebel. If it’s on your radar, book late in the week, when the kitchen has settled down and the joint is likely to be jumping. And, if you have offal intentions, always call ahead for a head.