It was 1926, and Walter P. Chrysler had arrived in Denver to attend the grand opening of the Cullen-Thompson Motor Company dealership at 1000 Broadway. The company—of which Chrysler’s friend Ward J. Thompson was a partner—had received one of the first franchise licenses in the country from the newly incorporated automobile manufacturer, and the owners planned for an opulent Denver headquarters in close proximity to the city’s well-established neighborhoods.

For decades, the dealership at 10th Avenue and Broadway was a destination for Denverites to explore Chrysler’s most innovative automobiles, as well as more affordable cars from Plymouth and Dodge, which were acquired by Chrysler in 1928. The expansive showroom was outfitted with a white grand staircase and large windows, which allowed passersby to catch a glimpse of the gleaming vehicles parked inside.

Today, visitors still flock to the old building at 1000 Broadway, but they’re not coming to buy cars. Gart Bros. Sporting Goods Company bought the property in 1971 and filled the more than 100,000-square-foot space with sneakers, footballs, a golf driving range, and rooftop tennis courts—a far cry from the six-cylinder machines that once lined the ground floor. As the company’s longtime flagship store, the building itself—trademarked as “Sportscastle” by Gart Bros. in 1987—has become a Denver institution.

On March 2, Sports Authority, Inc. (which merged with Gart Bros. in August 2003 and took over its sporting goods stores) filed for Chapter 11 bankruptcy protection after skipping a $21 million interest payment in January and racking up $634 million in debt. The Englewood-based corporate retailer is slated to close as many as 140 of its 463 stores as a result of the filing, including the Sportscastle.

What will happen to the building now?

There is no doubt the building holds a special place in Mile High history. Ann McNeill, the granddaughter of W. J. Thompson of the Cullen-Thompson Motor Company, believes the property should be awarded an official landmark designation, and has connected with Historic Denver, a nonprofit that focuses on promoting architectural heritage and education, to determine the building’s eligibility.

“This building is about my grandfather’s legacy,” McNeill says. “He was a wonderful man with so much to offer the community. I love the idea of the Sportscastle becoming a landmark for the city that he and my grandmother loved so much.” 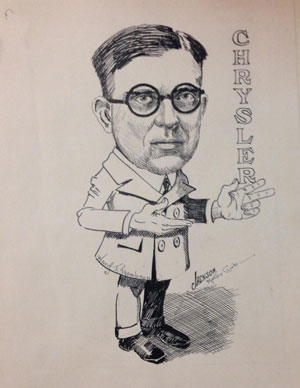 To earn a landmark designation from the city’s Landmark Preservation Commission—whose goal is to preserve structures that are historically, architecturally, geographically, and culturally significant—a building must meet two out of three criteria that determine significance: history, geography, and architecture. “The [Sportscastle] is certainly a great candidate for Denver landmark designation, as it seems, at least at first glance, to meet all three criteria,” says Barbara Stocklin-Steely, principal city planner for landmark preservation.

Annie Levinsky, the executive director of Historic Denver, agreed, noting that her nonprofit had identified the Sportscastle as a historically significant site during the conception of the 2014 Golden Triangle development project.

The value in a landmark designation lies within its power to manage change to external integrity and appearance of the building (and the land it resides on). The Denver REI flagship store at 1416 Platte Street, which was listed on the National Register of Historic places in 2001, is a great example: The exterior has remained intact since its construction in 1901 as the Denver Tramway Powerhouse, while the interior has been transformed into the gear mecca that we know today. If Sportscastle receives this designation, the owners may be eligible to receive grant funding and state tax credit toward structural rehabilitation and up-keep, but the building’s exterior and the land could not be built on without permission from the Landmark Preservation Commission. 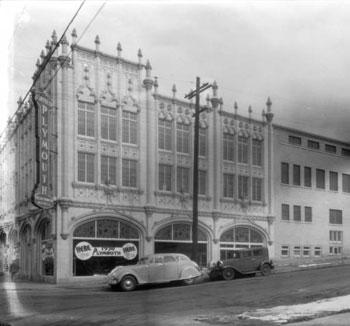 The Sportscastle building was designed in the early 1920s by famed architect Jules Jacques Benois Benedict, who was “one of the most flamboyant personalities in Denver’s architectural history,” according to historians and authors Thomas J. Noel and Barbara S. Norgren. (The pair chronicled more than 50 years of Denver architecture in their book, Denver: The City Beautiful and its Architects.) Benedict was a master of the Beaux Arts architecture style and spent much of his career engaged with projects for the city of Denver (the Washington Park Boathouse, built in 1913, was also his work), as well as designing extravagant mountain residences. The 1000 Broadway building is the only known commercial space designed by Benedict that is still standing—making it a shoo-in as a landmark.

The location of the building is also significant. The Broadway corridor came into its own as a commercial thoroughfare at the beginning of the 20th century. Known then as automobile row, the area sits strategically between the Capitol Hill and Civic Center (Golden Triangle) neighborhoods, home to well-appointed brownstones and members of Denver’s high society. The Cullen-Thompson Motor Company thrived and survived well beyond the trials of the Great Depression here. McNeill recalls her grandmother identifying jewelry and crystal flatware that her husband had traded in exchange for Chrysler automobiles during the Depression—all marks of the luxurious lifestyles of well-to-do Denverites, even in tough economic times.

“I used to bring my roller skates to the dealership and he would let me skate around the parking areas, alongside some of the vehicles,” remembers McNeill. “I was in awe of the turreted building; I felt like a princess.”

W. J. Thompson passed away in 1954, and F. C. Cullen operated the dealership through the 1960s. When Gart Bros. Sporting Goods Company took over the space, Jerry Gart, patriarch of the company, turned the gear store into a well-known destination. People from all over the metro area came for the annual SNIAGRAB, the first-of-its-kind, big-box store bargain sale—a tradition that began in 1954 at Gart’s first storefront at 1643 Larimer Street. The Colorado Ski & Snowboard Hall of Fame even credits Gart Bros. with bringing snow sports to the masses, as it was the first retailer in Denver to offer affordable gear.

For 90 years, the Sportscastle building has brought magic to utilitarian goods: The space’s golden doors and stained glass elevated a quotidian shopping day to a luxury experience. The iconic building has continued to transform along with the tastes of Denver residents and the character of this dynamic neighborhood, and soon it will change once again.

Mark Sidell, president of Gart Properties, looks forward to the property’s future possibilities. “Pursuing landmark designation is one of the options we’ve been considering,” says Sidell. “We’ve begun to meet with Historic Denver, Capitol Hill United Neighborhoods, and other community members to assess the options.” As for future tenants, Gart Properties has just begun to research the immense commercial potential for the property and isn’t in a rush to fill the space (Sports Authority will vacate the building at the end of April).

Among Ann McNeill’s family heirlooms is a scrapbook full of newspaper clippings, photographs, and magazine covers chronicling her grandfather’s accomplished life. Like most contemporary Denverites, W.J. Thompson was a Colorado transplant, a farmer originally hailing from Iowa. Whether he was inspired by the impressive landscape or the untapped potential in the Denver market, Thompson set down roots that would extend well in to the 21st century.

“My grandfather’s story is Denver’s story. Three generations of my family can call themselves Coloradans, and that building has something to do with that,” says McNeill. “History reminds us where we came from and who we are to become. I would love to see this building remain a vibrant icon of the Denver community.”