Patients of St. Anthony hospital’s former campus south of Sloan’s Lake Park likely wouldn’t recognize the site today: A $300 million transformation has reconnected the streets where the hospital once stood and resurrected fantastic waterfront views, and the seven-block neighborhood will soon host a mix of retail and residential spaces, restaurants, and offices that could draw hundreds of new residents to this evolving district a few miles west of downtown. A key element of the project, Perry Row at Sloans, broke ground on phase one of its townhomes this month.

“It’s a unique situation to have this type of product in this type of environment,” says Presidio Sloans LLC principal Scott McFadden, who is developing Perry Row at Sloans, which will eventually comprise 64 two- and three-bedroom townhomes priced from the mid-$400,000s to the $700,000s. Given the current condo shortage in Denver’s real estate market, these stand-alone townhomes—they fall under less restrictive insurance legalities than condominiums—couldn’t come at a better time, and 15 buyers have already signed on. 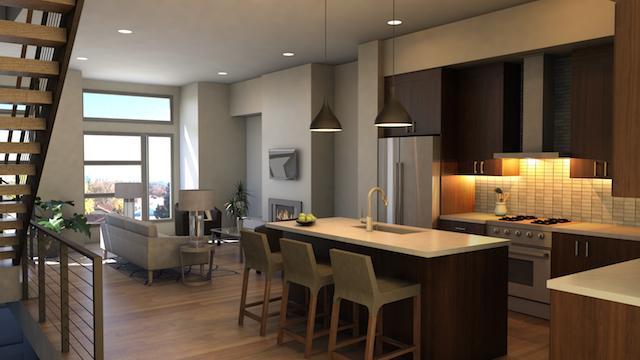 Designed by Denver’s Sprocket Design-Build, the modern, open-concept homes feature contemporary design with traditional high-end materials. Along with the entire Sloans redevelopment, the project also adheres to LEED for Neighborhood Development standards, which means smart growth, sustainability, and green-building principles are incorporated at every development level. Finally, the units are designed for Coloradans, by Coloradans: Think two-car garages (plenty of room for gear) and rooftop patios (hello, outdoor entertaining).

McFadden notes that the two most underserved buyers in today’s market are millennials and empty nesters, who are actually demanding similar real estate amenities. “Both are looking for walkable neighborhoods with a sense of community,” he says.

Along with easy access to Sloan’s Lake and its park, the development sits only three blocks away from a light rail station, meaning Union Station is just a 12-minute ride away. “It feels like you are moving to Wash Park,” says Deviree Vallejo, broker at Kentwood City Properties (Vallejo and her partner Liz Richards are the exclusive listing agents for Perry Row at Sloans).

The mix of local and national businesses already announced for the neighborhood includes Alamo Drafthouse Cinema and a new outpost of Highland Tap and Burger, and there are rumblings about a natural grocer as well. More multi-unit and affordable housing units are planned for the development, but Perry Row will offer the only stand-alone townhomes on-site.

“It’s a very exciting project, and there’s a real demand for this type of housing right now,” McFadden says. “There are townhomes in other, much more dense neighborhoods, but this neighborhood has so much going for it. Between the lake, the light rail, and the community feeling, it’s really bringing something different to the landscape.”