May has arrived and it’s finally starting to feel like summer. And in Colorado, summer means music at Red Rocks. The legendary venue’s season kicks off this Friday with an acoustic-based performance featuring jammy bluegrass quintet The Infamous Stringdusters with Florida rock ‘n’ rollers J.J. Grey & Mofro and opening act Fruition.

The May 22 show with Rising Appalachia, Josh Ritter & the Royal Band, and Elephant Revival seems more like church than a concert, in that you’re more likely to walk out rejuvenated and contemplative than slightly buzzed and in party mode. Rising Appalachia is led by sisters Leah Song and Chloe Smith, who describe the band’s intoxicating combination of folk, world music, and soul as “front porch music.” Josh Ritter is from Moscow, Idaho, and was inspired to become a singer-songwriter upon hearing the likes of Leonard Cohen and Gillian Welch. His folk-pop sound compliments Nederland-born headliner Elephant Revival, and you can prepare for the show by listening to the quintet’s ambitious new album, Petals.

On May 16 another Nederland band, Gipsy Moon, will play Boulder’s Upslope Get Down Music Festival, where you can drink delicious beer while contributing to a good cause. The following Saturday, the band will play another outdoor show and charity event, the Denver Day of Rock. (The quartet doesn’t really play rock, but neither do many others on the lineup.) Gipsy Moon’s sound is more vaudevillian and oscillates between worldly folk, Celtic melodies, and Latin soul. I recently caught up with the group at its 420 show opening for fellow local Jeff Austin at Nederland’s new Caribou Room. Conspicuously not stoned, the quartet discussed everything from its new album, Sticks and Stones, which drops May 13, to the influence of its Rocky Mountain home. 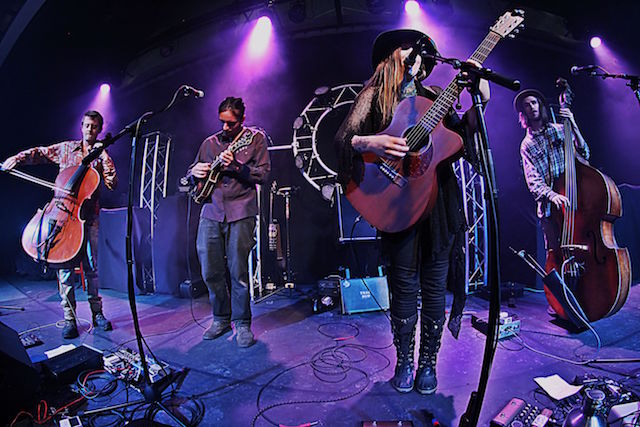 Gipsy Moon is led by singer-songwriter Mackenzie Page, who also plays guitar and the tenor banjo. Her partner in life and on stage, Silas Herman, sings, plays guitar (he also played in Jeff Austin’s band on 420), and plucks a mandolin with hereditary skill. (His dad is bluegrass legend Vince Herman of Leftover Salmon.) Boulder-bred Matt Cantor plays bass and sings, and Andrew Conley, originally from Iowa, rounds out the ensemble on cello. The band’s music is a collaborative undertaking, so I figured it most appropriate to let the members speak for themselves:

“We opened up for Devotchka last year, and that was the first time I said, ‘I want to be this band when I grow up,'” Page says. “That’s me personally. The cool thing about this band is that everyone’s steeped in different traditions. Matt’s really in to jazz music; Andrew’s got the more old-time vibe; and Silas has the bluegrass vibe. So bringing us all together, everyone just gives their part and their perspective and it all morphs into this unique sound.”

“One of the tracks on our new album, ‘Rain Song,’ I wrote right after the [2013] flood. I’ve been on this really big trip about how powerful nature is and how much it determines your world. I think we forget about that sometimes,” Page says. “We’re at such a pivotal time with climate change; one way you can bring awareness to nature is by reminding people of their connection to it.”

On the Nederland scene:

“My dad and I lived right next to Bonnie [Paine] and Dan [Rodriguez] for a couple years when Elephant Revival was just starting,” says Herman. “We’ve gotten to play with a lot of those guys, jamming with them after shows. It’s like family.”

On the new album, Sticks and Stones:

“We recorded it in Denver at Silo Sound with Todd Divel, who’s an amazing engineer there,” Page says. “Tim Carbone from Railroad Earth produced it. He and Todd just have this great working relationship with each other.”

“I love ‘Devil in Mind’ because it’s super different with all of the filters on my voice,” Page says. “It just has all this super weird percussion—goat hooves for one, which has this cool, clanky sound that you just don’t get anywhere else.”

“My favorite song on the album is ‘Revolt,’ which has the clapping,” Cantor says. “It was the last day of tracking, we were finally forgetting about our environment—we were just locked in.”

From Conley: “It’s art music, but we try to keep it danceable.”