Even though it has a tiara and sashes, the annual Miss Rodeo Colorado contest ain’t no beauty pageant. Sure, you’ll find big hair, lots of fringe, and a fashion show, but all of that comes after a multiday competition that tests horsemanship skills and includes interview questions on everything from Colorado’s marijuana laws to equine diseases to foreign policy. The event produces an annual winner who defies the stereotypes associated with “typical” pageant queens: These women match brains, brawn, and beauty in a style that is utterly Coloradan. When the competition turned 60 this past June, we turned to several former champions to get their thoughts on ranching, winning, and how to age gracefully. As you’ll see, their determination and style hasn’t changed a bit. 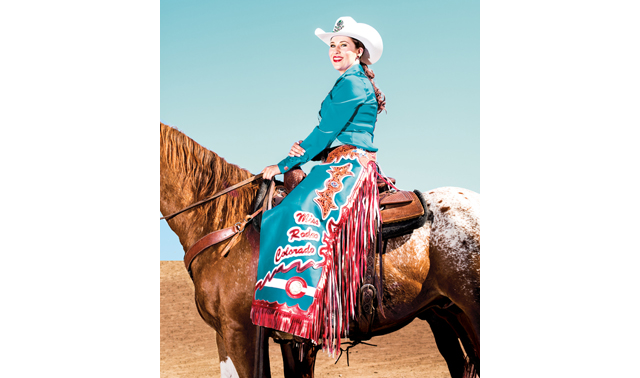 During my reign I traveled more than 40,000 miles throughout the United States and Canada. I made amazing contacts that will help me get a job when I’ve completed my doctorate in physical therapy. On the road, I was surprised how many people just throw rodeo queens into the beauty pageant world. That’s not right. You wear a crown, but you also know about working cows and the rodeo lifestyle. I’m a fourth-generation rancher, so I know that what makes Colorado special is the ranching industry. 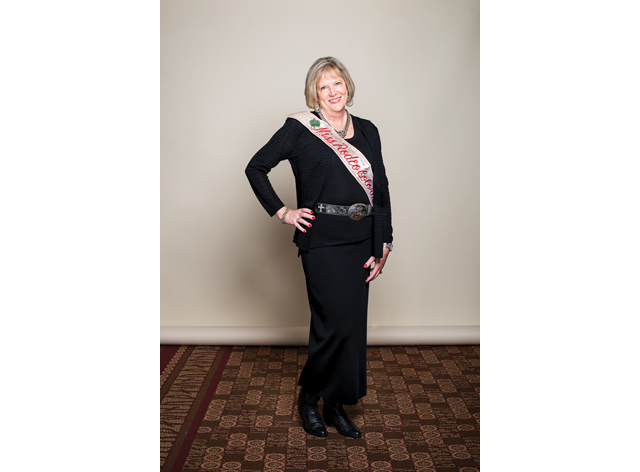 I had fun promoting the sport as Miss Rodeo Colorado, but I distanced myself from my agricultural background later. When I started my own commercial embroidery business with my brother at 23, I didn’t want people to think I was a country girl and not a serious entrepreneur (even though some of my first accounts were through rodeo contacts). After 18 years I left that company and eventually started working in the golf industry, where I met my husband. People are always surprised to learn that I know the front end of a horse from the back. Over all this time, my opinion on beauty has changed. When I was younger, I thought beauty was on the outside. Now, I think it takes a little bit of age and wisdom to realize that the exterior doesn’t really matter. It’s what is in a person’s heart. 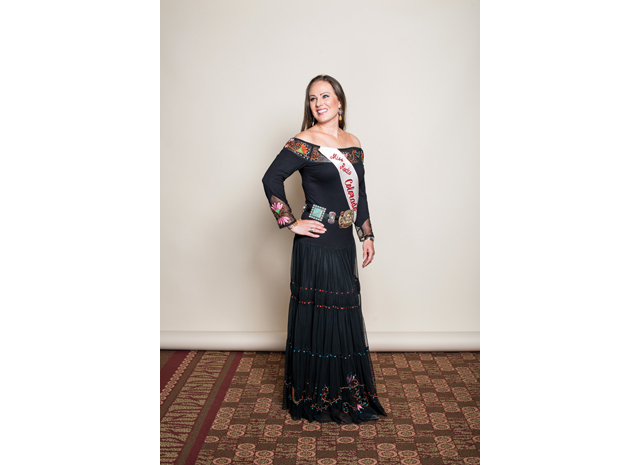 We used to have to wear monochromatic outfits, so the boots and long lambskin dress (we couldn’t show our legs) were dyed to match. There was a time when fringe was big; you’re seeing that again. There is still lots of hairspray. All that is fun, but the pageant is really about building community, representing a passion for agriculture, and making friendships. I met my husband when he was working sales for his concessions company at the National Western Stock Show during my reign. Who ever knew a country girl would marry a city boy? We have two girls. I worked as a teacher for seven years and now serve on a few local boards, including the Children’s Museum of Denver at Marsico Campus and Future Farmers of America. 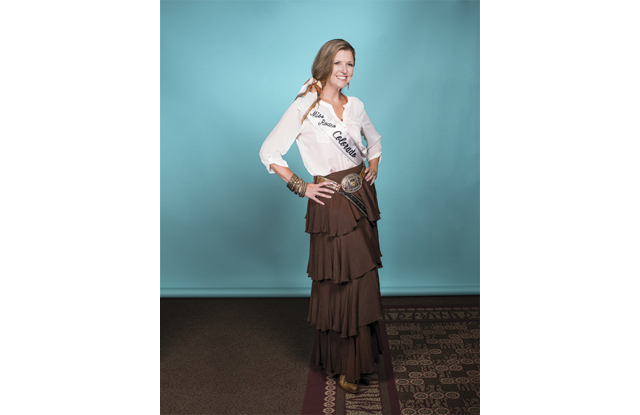 I was first runner-up in Miss Rodeo Colorado two years in a row. My mom told me to give it one more try, so I did and won. You can only try out for Miss Rodeo America once, and I studied so hard for that competition; I had thousands of notecards on everything from equine health to current events. After I won, I was planning to go to law school, but one of the Miss Rodeo America sponsors asked if I would like to join their company. I’m now a national account manager for Merck Animal Health. I have two kids, and I travel a lot, but I have an amazing husband who supports my career and lets me follow my passions. I’ve learned that when you are 20, you are driving 100 miles per hour; when you are 30, you drive five miles over the speed limit. When you are nearing 40, you turn around and say, “I’m going to drive the speed limit because I don’t want to miss my turn!” 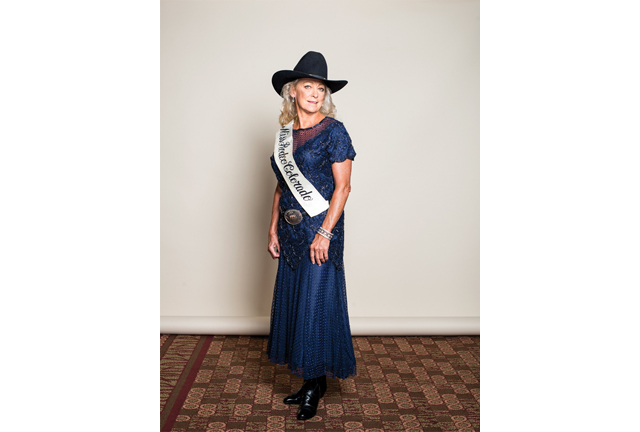 Horses, rodeo, and the Western way of life were really big parts of my life when I competed for and won Miss Rodeo Colorado. That lifestyle is still in my veins. We have a small ranch between Greeley and Windsor. We raise hay, a few head of cattle, and horses. Our house sits back a quarter-mile off the road, and I love living out here. I’m still honored and proud to be involved with the Miss Rodeo Colorado organization; I’ve even judged. There’s a lot of cooperation today with the competitors, and that’s nice to see. As for aging gracefully? Stay active. Challenge yourself. Learn new things. Give service and do a random act of kindness at least once a day. Help others smile even if you don’t know them. 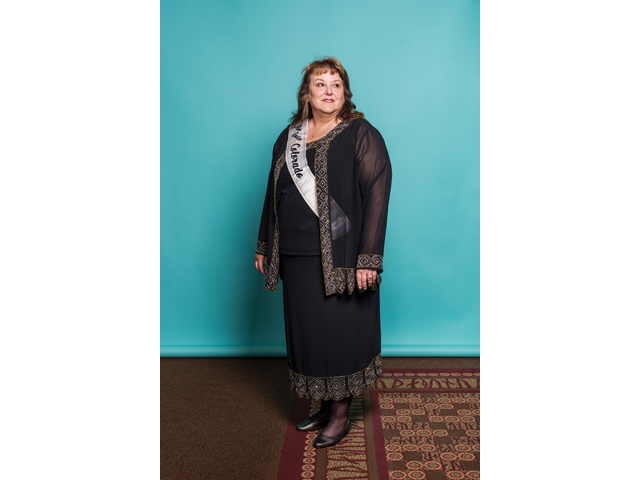 When I was growing up in Pueblo, the Miss Rodeo Colorado pageant was held at the state fair, so in middle school I was enamored with and inspired by the queens. Competing was a popular thing to do, so I did it and won. The best part of the pageant was meeting so many people, but always having to have your A game on was hard. I started writing for the Professional Rodeo Cowboys Association and other publications. I was just 12 credits shy of my bachelor of arts, so I went back to school and got my teaching certificate. I’ve been teaching high school—mostly Spanish—for 27 years, and I’m a stone’s throw short of retirement. I’m looking forward to spending time on my family’s ranch in Westcliffe and raising bees. Now, beauty means something different to me than when I was younger. It is more health-inspired. If you have your health, you have beauty. 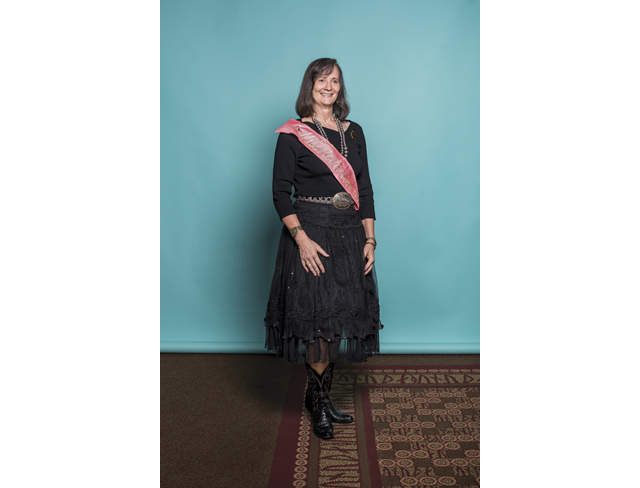 I majored in horse training at Lamar Community College, and looking back, working with horses was such a constructive focus for me—for any young woman. I tried out for Miss Rodeo Colorado three times, was the first runner-up twice, and won it all the third year. Shortly after my reign, I was modeling Western wear at the Denver Merchandise Mart and met a boot salesman from Texas. He whisked me off my feet. He moved up to Colorado for bit, but we had a few bad winters, and he asked me to move to Texas in 1985. I worked for American Airlines and went back to school at night for my bachelor’s degree in business. About 20 years ago I reconnected with the rodeo world. As I’ve grown older, I don’t think it is wise to chase youthful looks. Beauty is accepting where you are and bearing the marks of time to show what you have learned and where you’ve been. 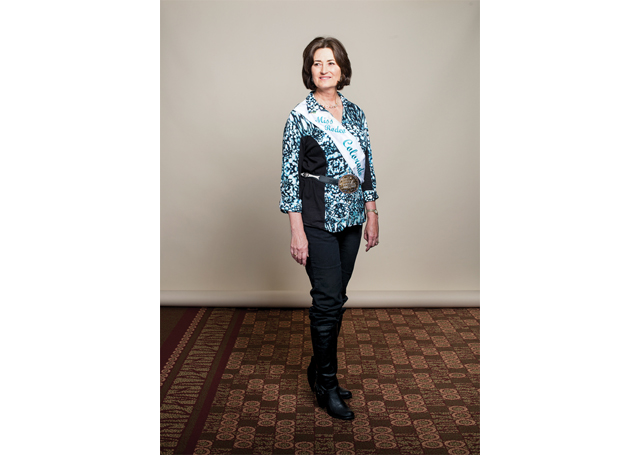 I came from a rodeo family (my dad was a professional calf roper), but I joined the competition primarily for the scholarship money. When I won Miss Rodeo America, I earned another scholarship. Between the two—and a rodeo scholarship I earned to University of Southern Colorado—I was basically able to pay for college upfront. I can thank Miss Rodeo Colorado and Miss Rodeo America for that. I created two therapeutic riding nonprofits, got married, and raised three sons with my husband, who ranches and farms. We have three grandsons and another two grandkids are on the way. I’m an associate vice president at Otero Junior College, where I focus on marketing, recruiting, and retention of students. I still ride and do a lot of training. When I get off work and it’s not cold, I’ll ride. 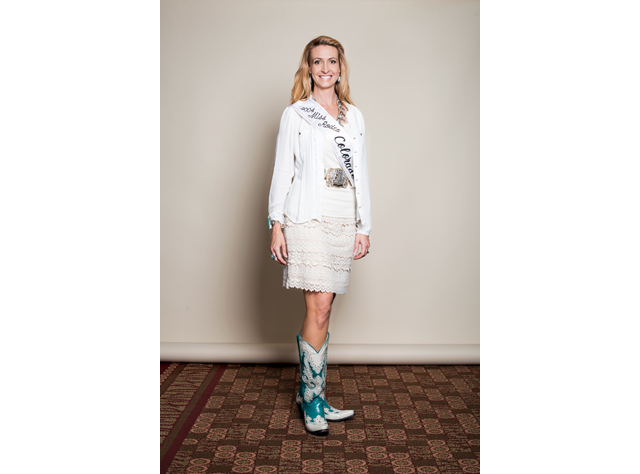 I think beauty is having the whole package. You might be the best rider, the prettiest girl, or the smartest person, but you have to work at all of it to win. During competition, I didn’t take myself too seriously; it was fun. I still keep in touch with the other contestants, and my sister won the title in 2004. But my least favorite part was that it took place at the hottest time of the year, during the Fourth of July rodeo in Greeley. You’re trying to look beautiful—and you’re just melting. Sequins and leather dresses with big puffy sleeves were in. It was like wearing tinfoil. During my reign, I really enjoyed talking to kids and inspiring them at rodeos, childrens’ hospitals, and parades. Since then, I’ve worked in the agricultural industry, doing sales and marketing and using the skills I learned during Miss Rodeo Colorado. I moved around the country a bit but came back to the state to be with family. 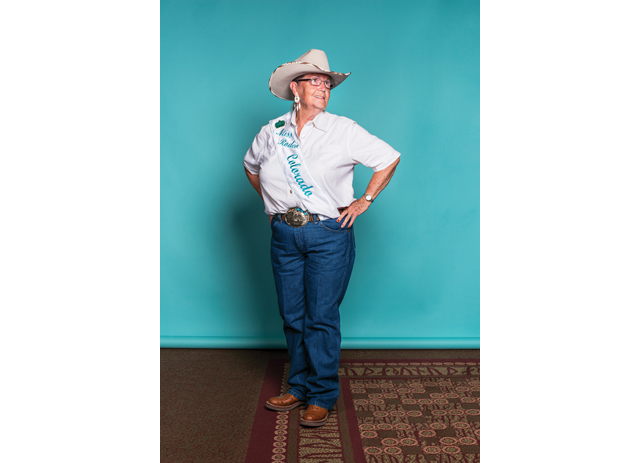 When I was competing at nationals in Las Vegas, during one of my horsemanship rides they announced over the loudspeaker that President John F. Kennedy had been shot. Vegas shut down, and the girls from Texas who were competing got threats. I’ll never forget it. After that year, I stayed involved in rodeo. I ran barrels until a horse fell on me and I broke my neck in 1972. I had two girls and I’ve got five grandkids now. My husband passed in 2002, but he worked as a brand inspector, which brought us to Greeley. I’ve had a few careers, including working at Kodak for 33 years. When the floods hit in 2013, I lost everything. We swam our livestock up to safety in water up to our shoulders. We’re still rebuilding. As I age, I find that I will forget a person’s name from my pageant days, but I can always remember her horse.