The Colorado Rapids added a number of accomplished players during the off-season, but only one of them can put a shout-out from President Barack Obama on his resumé. “There’s actually a petition on the White House website to make Tim Howard the next secretary of defense,” Obama quipped after the 2014 World Cup, when Howard, the U.S. men’s national team goalkeeper, stopped 16 shots in one match, a tournament record. Although Howard didn’t get the appointment—damn that Ashton B. Carter and his credentials—his gig in Denver is pretty important too. After a decade at Everton Football Club in England’s Premier League, this month Howard joins new Rapids Marco Pappa, Shkelzen Gashi, and U.S. teammate Jermaine Jones in pursuit of a 2016 MLS Cup playoff spot. (The team went from bad—second to last in the Western Conference—to worse, last, over the previous two seasons but led MLS at press time.) Before crossing the pond, Howard spoke with 5280 about tattoos, Tourette syndrome, and making the Rapids relevant again. 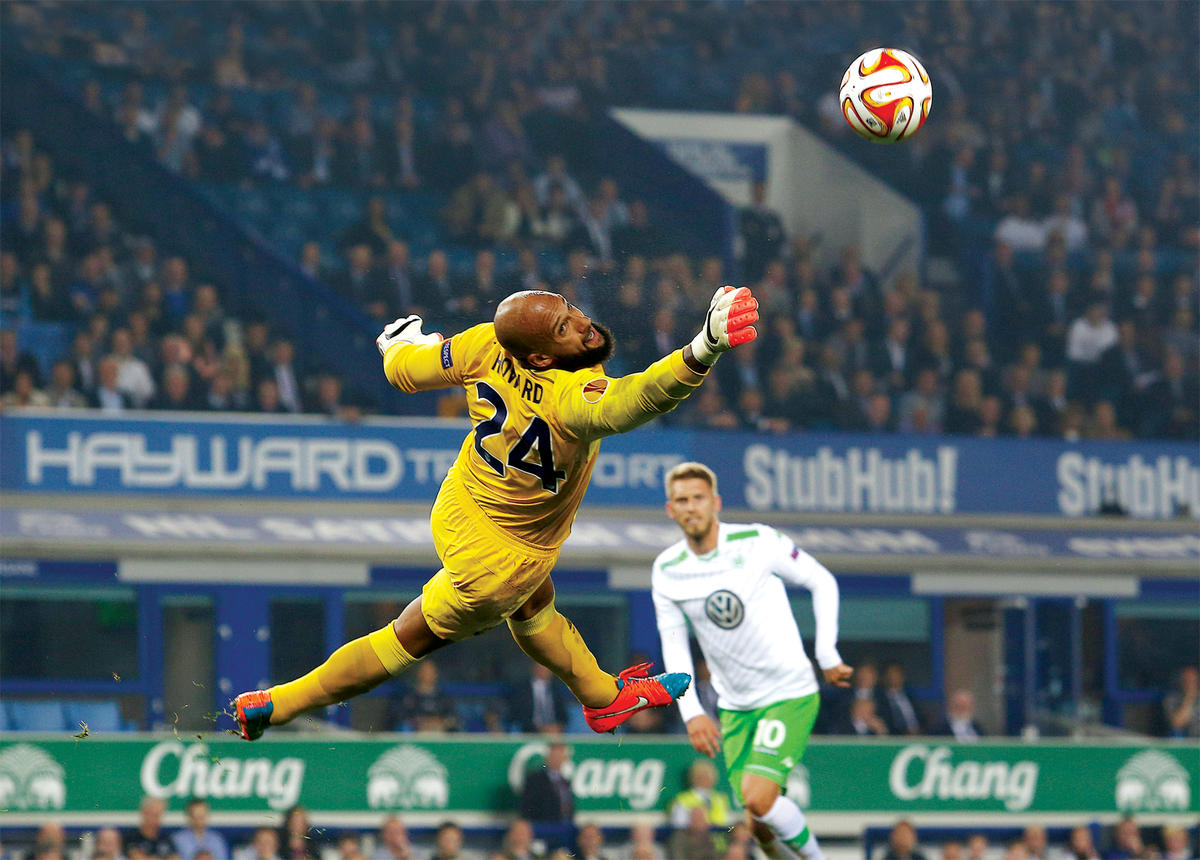 5280: You grew up in New Jersey but idolized former Denver Nuggets guard Mahmoud Abdul-Rauf. Why?
Tim Howard: He was playing for the Nuggets around the time I was diagnosed with Tourette syndrome, and he has it. [Tourette] wasn’t very mainstream, so I latched onto him as a kid.

Why move back to the United States?
I always wanted to end my career at Everton. But I realize football is a business. Fairy tales don’t always end the way you want them to. I had to start thinking about my future. I had two years left on my contract and was offered a chance to extend that another year and a half [with the Rapids].

Most international stars coming to MLS go to teams on the coasts. Did you have to be convinced to come to Colorado?
Not at all. I had a face-to-face conversation with Paul Bravo [the Rapids’ vice president of soccer operations] and was sold.

What was the pitch?
They know what success looks like and wanted to get back to being a successful franchise. They saw me as an integral part of that. That was all I needed to hear. This is a place I want to go, put roots down, and have success. If, as you said, players are drawn to coastal cities, I want to help make Colorado the place to be.

A lot of people think MLS is a retirement league for European stars, but you don’t agree. Why?
If Didier Drogba came here to retire, he wouldn’t be putting in the effort he is. David Beckham wouldn’t have won two championships here. These guys are still hungry for success. They can still dominate games.

In Europe, soccer is king. But the Broncos rule Denver. Are you looking forward to flying under the radar here?
Absolutely. By the nature of what I do, I’m in the public eye. More than anything else, though, I like my personal space and time. But it’s also exciting to get out in the community and spread the word about the Rapids.

How many tattoos do you have?
I wish I knew. I have a lot—basically my lower legs and entire upper body minus my hands and neck.

How about adding a Colorado flag?
I don’t even have an [Everton logo], so I can’t imagine I’ll get the Colorado flag. But maybe—if I put roots down and it becomes my home. I get tattoos on a whim oftentimes. You never know.

Most Americans recognize you from the U.S. men’s national team, but you’ve spent nearly two decades living in the U.K. Will you miss living there?
I’ll miss Everton Football Club. It’s been my home for a long time. More than anything, I’ll miss my friends who I have a really deep connection with.

The U.S. team has had some ups and downs during qualifying for the 2018 World Cup. What are your thoughts on how the team is progressing?
It takes some of the cooler heads in the group to understand how qualifying works. When we [win against Guatemala, 4-0], we don’t get too excited. When we lose a game away from home, that’s not the end of the world either. It is a long process [PROCESS?]. We’re making strides, but we’re still a team in transition. It sounds crazy, but we’re a team that has to get younger, who has to get more dynamic. When you add youth into the mix, it’s a bit of a crapshoot. You have to take your bumps and bruises. That’s the only way to give young people experience. We’re trying to do that for this team. But I’ll tell you, we’re full of talent, and that’s the exciting part.

Do you think it’s better for the MLS to import international stars or should there be a larger emphasis on nurturing homegrown talent?
Here, you have the luxury of being able to do both. We can bring in foreign players who are top world stars, and you can also cultivate young American talent. There’s enough positions to go around.

You believe the U.S. women’s national team should fight for pay equal to the men’s team. Still, there seems to be friction between the two squads.
A few of the men’s players took the opportunity to have a shot at one or two of the women’s players who previously had some not-so-nice things to say [about the men] on social media. So it’s tit for tat, really. Players are allowed to think for themselves and express themselves as they see fit. As far as there being friction, I don’t know of any. We certainly pull for the women’s team and—I would imagine—they pull for us. Outside of that, there’s no real interaction. Our worlds very rarely cross. When they do, it’s always positive.

There hasn’t been a young, elite-level keeper to emerge to replace you on the U.S. team. Why is that?
That’s a question I get asked often, and I don’t have the answer. I think you need opportunity, and all the goalkeepers before me got an opportunity to play abroad and test ourselves in England, which is considered one of the best leagues in the world. I think some of the younger goalkeepers who came after me haven’t really pushed themselves to those levels. They haven’t really gone to higher heights.

Is there anything in particular you’re excited about trying once you move here?
I’m just looking forward to getting to know downtown and the restaurants. More than anything, being involved in the culture. Obviously the weather lends itself to a very outdoor lifestyle, which I’m excited about—specifically for my kids.

Once you’re done playing, would you like to move into the Rapids’ front office?
In a perfect world, that makes a lot of sense. But we’ll see. We’ve got some things to do. But yeah, working on the executive side of football excites me. That’s something, when I look at my future, I hopefully see myself doing.